Born in Gent, the six year old Charles became ruler of the Burgundian Netherlands in 1506. By the time he was sixteen he was co-ruler of Spain following the death of his maternal grandfather, Ferdinand.

Through his grandparents he would ultimately inherit both Castile-León and Aragon becoming the first King of a united Spain.

Three years later his other grandfather, Emperor Maximilian died and the boy from Gent assumed the additional titles of Holy Roman Emperor and Archduke of Austria. He now possessed so much of the globe that the sun never set on his realm.

Emperor Charles V is known to the French as Charles Quint (the old word for : five and pronounced like an Australian : can’t).

In this form he has lent his name to many streets and even a beer. By the time of his abdication in favour of his son Philip II (famous for the Spanish Armada against England in 1588) almost all of western Europe was ruled by his Hapsburg family.

Much of his life was spent in war with France over his possessions in Italy (almost all of which belonged to Charles) and of course Flanders and Artois which formed part of the Spanish Netherlands.

Fortresses were built along the frontier of the time and some of these would feature during the Great War. Le Quesnoy saw centuries of fighting and in 1918 would be liberated by the New Zealand Division — by a patrol who did it the old fashioned way, by climbing over the wall with a ladder !

The citadel of Le Quesnoy

In 1527 whilst at war with Pope Clement VII, Charles sent an army to Rome. Discipline broke down after the death of its commander and the troops sacked the city and captured the pope. At this very moment Henry VIII of England was trying to get Clement to annul his marriage to Catherine of Aragon an aunt of the Emperor. As a prisoner of Charles, Clement was unavailable for comment !

When Charles abdicated in 1555 he divided his empire into two parts. His son Philip II of Spain inherited that side of the possessions whilst (the already troubled) Holy Roman Empire was granted to his brother Ferdinand.

Charles died at the monastery of St Just where he had secluded himself on 21st September 1558. 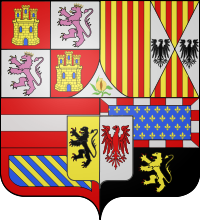 His coat of arms combine those of his parents with the addition of that of Tyrol (The red eagle).
Note the two lions : yellow on black (Brabant) and the black on yellow (Flanders).
The blue and yellow diagonal and the field of fleurs-de-lys represent Burgundian claims.