Webmatters : Arras - The Abbey of St Vaast and Arras Cathedral

The Abbey of St Vaast and Arras Cathedral

According to tradition the monk Vaast (Perhaps Vedastus in Latin — it is pronounced Vah without the -st) was the person responsible for teaching Clovis I Christianity. Having done so Vaast moved to the area of Arras (Nemetacum) where he found the townsfolk in fear of a rampaging bear.

Vaast ordered the bear to leave and never come back again — and the bear was never seen again (The death rate from bear attacks no doubt increased in the neighbouring villages !).

To commemorate his victory Vaast erected a chapel on the site and with the aid of others repaired the church in which he would eventually be buried in 540.

In 667 Bishop St Aubert founded an abbey on the site of St Vaast’s chapel to the west of Arras. It prospered over the next couple of centuries until it was razed by raiding Normans in the 9th Century. Rebuilt and burnt down again in succession over the years the Abbey would become the most important religious community by the time the Spanish crown had inherited the Burgundian territories.

Over the next few centuries the buildings fell into disrepair. The town was liberated by the French in 1640 but this did little to stop the rot and in 1746 the abbey was demolished with the intention to rebuild.

The new abbey was completed in 1784; just in time to be taken over by the forces of the Revolution (1789). The cathedral of Notre Dame however had been badly damaged and was eventually knocked down on Napoleon’s orders in 1805.

When the Bishop asked Napoleon about rebuilding the cathedral he was told that the abbey church could serve as such. Reconstruction began and by 1833 the newly rebuilt abbey church was finished and became Arras’ cathedral. The remainder of the abbey was bought by the town and now houses the Musée des Beaux-Arts (Fine Arts Museum) and a library.

One of the architects was Pierre Contant d’Ivry who was responsible for the La Madeleine in Paris which was also constructed in the ancient temple style.

The entire complex is one of the largest religious sites in France. 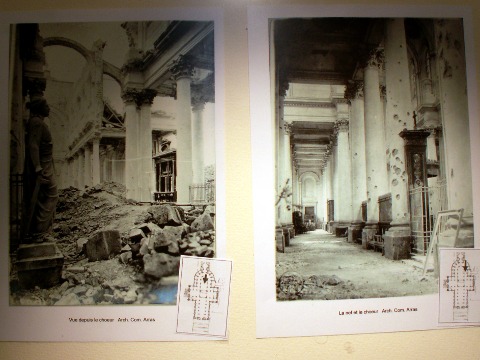 On 6th July 1915 the Germans put down a rain of incendiary shells onto the buildings. Soon, all that remained of the abbey buildings was the charred outer shell.

The art treasures had already been taken to the safety of the deep underground cellars.

With the town almost on the front line throughout the entire war the constant shelling reduced almost everything to rubble.

The cathedral was also very severely damaged. Visiting today you can still see signs on the outside of both the Great War and the Second (When the Abbey served as the British GHQ).

Within you will see an exposition of photographs of the destruction. The post-war Michelin Guide to Arras describes the cathedral as: …one of the most impressive ruins of the war.

Reconstruction in a more austere style began in 1920 and the cathedral was restored to its working function in 1934.It would be damaged again by a bomb in 1944.

The building is in the shape of a cross though its situation almost hides the effect. The nave is 104 metres long, 26 metres wide, and over 30 metres high. Much of the reconstruction was carried out using reinforced concrete.

The large statues of various saints in the nave were brought from Sainte Geneviève in Paris (Known today as the Panthéon). Amongst them you will find Saint Rémi (born on the modern Chemin des Dames battlefield) and Saint Éloi the ruined towers of whose abbey at Mont St Eloi are so easily visible from the Artois battlefields).

The cathedral is open to the public in the afternoons and also in the morning during the summer months. 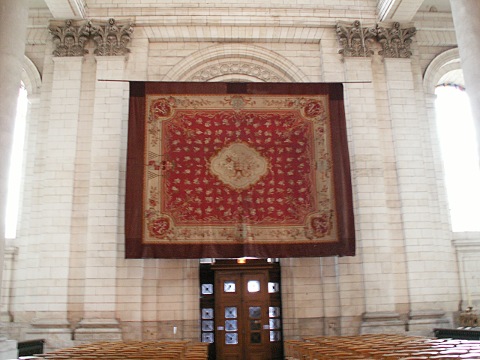