The saviour of Arras 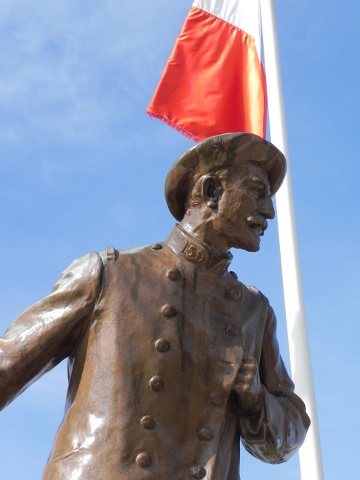 The battle for Arras (or 1st Battle of Artois) opened in earnest on the 2nd October 1914. The French defence of the town was entrusted to the newly formed 10e Armée under Général Louis de Maud’huy.

The French plan was to stop the Germans with a newly constituted Corps d’Armée (CA) under Général d’Urbal comprising the 77e DI, the 70e DI of Général Fayolle and later the 45e DI. The Germans would then be turned from the south by the 10e CA of Général Desforges.

Général Barbot’s 77e DI (Division d’Infanterie), was made up of a Brigade of Chasseurs à Pieds (Light Infantry) and two Regiments of Alpine infantry (97e RIA and his own 159e RIA). They had fought hard in Alsace and only detrained in Arras on the 30th September.

On the night of the 1st October the British Expeditionary Force began its move from the Aisne towards Ieper.

Far from encountering a feeble cavalry screen the 10e Armée found itself confronted by three German Corps newly arrived on the front. On the left Général Fayolle’s 70e DI were roughly handled and forced back; on the right, the attack by the 10e CA was severely repulsed and would be forced back in turn.

In the centre of the line Barbot’s men hung on for grim death at Feuchy (just to the east of Arras and the scene of much fighting by the British in 1917).

In the combat of 2nd October this Général, by his energy and fine conduct under fire, held his troops under violent fire and restored the situation under difficult circumstances.

The next two days brought more French reverses as the Germans occupied Lens and pushed ever closer to the southern outskirts of Arras. Still fighting it out at Feuchy, Barbot realised that he was in real danger of being encircled and withdrew into the streets of the suburbs.

To the north of him Général Fayolle’s men were beaten back village by village. By the 4th October the 70e DI had been pushed back to Vimy Ridge and disaster struck the French the following morning when they were pushed off it. Givenchy; Thélus; Souchez; all fell to the advancing Germans.

Foch was in command of the northern group of armies and had been given the task of stopping the rot, by any means. This was the time of the so called Race to the Sea and there was a real necessity for the French to hang on. Foch spoke plainly.

I know only three methods of combat: Attack, Resist, Bugger Off.
The latter is forbidden, so decide between the other two.
Général Foch

We do not retreat

Readying his men for a hard battle Barbot had already made up his mind to ignore any orders to retire.

Whilst I am alive we do not retreat. So, Gentlemen of the Staff go to the men. Raise their hearts! Repeat everywhere: We stand fast, we will not let Arras go!

Temporarily halted by the French stubbornness in refusing to give Arras up, the Germans waited for their heavy artillery. On the streets of the town the French prepared for the coming storm and waited.

On the afternoon of 20th October the storm broke. 210 mm and 280 mm shells crashed into the city. By the following day the town centre was in ruins.

On the 22nd as the great Belfry of Arras crumbled under artillery fire, the Germans attacked the eastern suburb of St Laurent, held by Barbot’s Alpine Chasseurs. They fought until exhausted before being relieved by Senegalese troops of the 45e DI (whom Barbot threw into a counter-attack supported by Zouaves and Chasseurs).

The Germans were halted in front of the town. Barbot’s convictions and his soldiers’ tenacity had been fundamental in saving the Arras from occupation.

In the months that followed Barbot and his Division were moved in front of Souchez in readiness for the French offensive against Vimy Ridge on 9th May 1915 (The British would fight the Battle of Aubers Ridge in a supporting role).

On the hill overlooking Souchez (Near Cabaret Rouge CWGC Cemetery) Ernest Barbot was mortally wounded whilst dashing across open ground in the front lines.

A monument to him and his Division was erected in Souchez village after the war. A much loved soldiers’ general the inauguration was attended by about a hundred thousand veterans and VIPs.

He is buried under a simple soldier’s cross at Notre Dame de Lorette.