Our visits to the battlefield often bring forth the question as to why we were attempting the seemingly impossible in a particular place, at a particular time. In the case of the battles along the Aubers Ridge in May 1915 the impulse came as much from the Eastern Front as it did from pressure from Général Joseph Joffre the French Commander in Chief.

Having suffered some setbacks in the opening phases of the war against the ponderous and ill equipped Russian army the Germans and Austrians had begun 1915 by freeing East Prussia and driving huge holes into the Russian defensive line.

There were a number of considerations for the French and British to ponder if the Central Powers (Germany, Austria and Turkey) continued their aggression in the east. To begin with, the Germans were required to move 100,000 troops away from the west to create their Eleventh Army. This suggested that they would never be weaker along the 800km of trench lines that ran between the North Sea and the Swiss border.

There was also the question of ensuring that Germany collapsed, before it managed to bring Russia down. 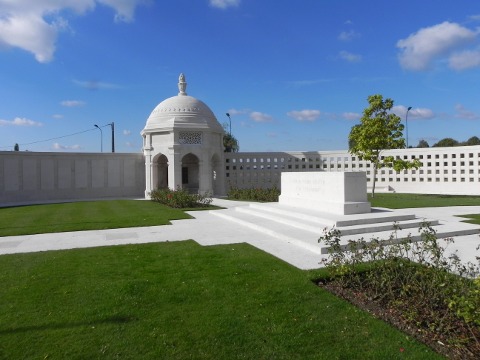 Up until the Battle of Neuve Chapelle (10th March 1915) the French had not held the British fighting forces in high esteem. Though not the stunning victory that had been hoped for Neuve Chapelle had nevertheless greatly alarmed the German commanders who realised that the British had come very close to piercing their line.

Six months into the war the mind set of static warfare had not yet totally instilled itself and even if by comparison to 1918 we may have been toying with each other, the means attributed to the forthcoming Allied offensives were considerable.

Field Marshal Sir John French commanding the British Expeditionary Force was approached on the 6th April by Général Ferdinand Foch in command of the Northern Group of French Armies (GAN). Foch had with him Joffre’s plans for a proposed combined offensive towards the Douai plain (apart from anything else, a vitally important coal mining area).

Looking out from Vimy Ridge towards Loos and the Aubers Ridge

In essence, Général d’Urbal’s Tenth Army would attack Vimy Ridge, whilst on the preceding and following days, subsidiary attacks would take place to expand and develop the front. One of these actions was aimed at securing the great spur of Notre Dame de Lorette, for which the Germans were fighting tenaciously.

The British First Army under General Sir Douglas Haig was to launch its offensive the day after d’Urbal’s attack with the aim of pushing the German line back towards the La Bassée to Lille road.

On the 9th April Sir John replied that he would employ ten divisions, supported by a hundred heavy and five hundred pieces of field artillery. The plan would not have been complete without the reserve of five divisions of cavalry (Three years later many of the Generals were still dreaming of the thunder of hooves putting the enemy to flight).

On the 22nd April 1915 the Germans launched the 2nd Battle of Ypres using gas for the first time on a massive scale (small doses had already been used by both the French and Germans).

On the 1st May the Germans launched their own offensive in the east which would, over the coming months, drive the Russian forces out of Poland (at the time part of Russia).

With the struggle to hold Ypres continuing, the decision was taken that the easiest way to help operations in the north (on unfavourable ground) was to launch the offensive in Artois. The date for the primary French attack was set for the 7th May with the British assaulting the Aubers Ridge on the 8th May.