On the 3rd May 1915 the French Tenth Army had commenced its preliminary bombardment of the German positions along Vimy Ridge. The plan was for the artillery to soften up the defences for four days followed by the infantry attack on the 7th May (with the British attack taking place on the 8th).

However on the 6th May it began raining and by the following morning the fog was so dense that an attack of any sort would have been an act of the purest folly. Général d’Urbal postponed his attack for forty eight hours and agreed with Sir John French’s request that the British offensive should begin on the same day.

Sunday 9th May dawned clear and warm and along the British front all was calm, in the distance the French guns could be heard as the sun rose just after 0400 hours. Then at 0500 hours the British guns opened up : the battle for Aubers Ridge had begun.

The commander of I Corps was Lieutenant General Sir Charles Munro and it would be his 1st Division under Major General Richard Haking that would act as the right flank of the assault on Aubers Ridge.

(Generals have a curious rank structure that comes from the French titles. A French Brigadier equates to a Corporal, a Major is a Sergeant Major, and Lieutenant is the same. Thus British Generals rose from Brigadier General (Brigade) through Major General (Division), Lieutenant General (Corps) to full General (Army))

The 1st Division had 96 field pieces of artillery distributed along the Rue des Berceaux at about 1500 metres range from the German front line. A kilometre behind that at Richebourg St Vaast there were 46 howitzers assigned to pulverising the German parapet.

At 0530 hours the intensity of the shelling increased and ten minutes later the 1st Division launched its attack. As the soldiers left the trenches the 2nd Division in reserve was moved forward to within five kilometres of the front. At the same time the 47th (London) Division holding the next sector to the south were put on notice to move forward to the Rue d’Ouvert (1500 metres to the east of Festubert).

The initial assault by 1st Division was carried out by the 2nd and 3rd Brigades and their units had all sent their first wave of troops out into no man’s land during the latter stages of the bombardment.

The plan was for the men to get within 80 metres of the German parapet just as the bombardment finished.

The distance between the two sides varied greatly. On the right it was almost 500 metres whilst this narrowed to just a 100 metres on the left of the Division. Regardless of distance the soldiers had numerous water obstacles that were going to have to be traversed.

It was thought (incredible as this may sound) that this forward movement could be achieved without interference; because the Germans would be preoccupied with taking cover from the shells. A naivety which was to prove costly. 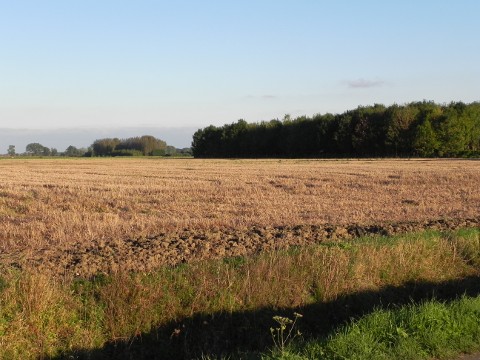 The area to the left of Princes Road

German sentries soon spotted the men leaving the trenches and began cutting them to shreds with machine gun fire from their protected positions before the bombardment had even finished. Despite this the British rushed forward as required and managed to gain a line not far short of the intended jumping off position – but the surprise had been lost.

At 0540 hours the bombardment lifted 500 metres onto the Quinque Rue; an incredible distance which would offer the attacking soldiers no covering fire at all.

The two brigades leapt to the assault and for many of the battalions concerned they were immediately stopped in their tracks.

At a time when shells were not specifically designed to deal with barbed wire, thirty minutes of what was available was never going to be sufficient to destroy the German wire (Seven days of shelling a year later on the Somme still failed to provide an adequate result).

There were a few gaps here and there but those who managed to find a way through then found that the two metre high parapet was virtually intact. A full company from the 2nd Bn Munster Fusiliers did manage to gain access to the German trench via one of the rare breaches. Their Commanding Officer, Lt Colonel Rickard had been killed in the assault, and the ill fated company was never seen again.

By 0600 hours it was evident that the attack had run itself into the ground and General Haking ordered a second bombardment from 0615 to 0700 hours. A further effort to launch an assault would then take place across the entire southern front of the battlefield.

With the artillery incapable of locating the multitude of machine gun nests in the German parapet and its inability to destroy one with anything less than a direct hit, this second softening of the German line was as inadequate as the first.

The second assault merely added to the cost of the first without an extra metre of ground being obtained. At 0720 hours General Haking realised that the 2nd and 3rd Brigades had been cut to shreds and offered to make a third attempt using his 1st (Guards) Brigade.

Thankfully his Corps commander told him to do no such thing until the situation had been reassessed and new orders issued. In less than two hours Haking’s two brigades had lost over 2,000 men as casualties.