The artillery plan for Aubers Ridge was for a preliminary bombardment of just forty minutes, the final ten of which would be intense.

The Official History lists each piece in careful detail, but in summary, General Sir Douglas Haig’s First Army had 516 Field and light guns available for the task in hand plus 121 heavies. In comparison, Général d’Urbal commanding the French Tenth Army (which was about to attack Vimy Ridge) could count on 959 field and light guns and 293 heavies.

The French had also decided that short bombardments were grossly insufficient to deal with modern defences and had opted for a four day preliminary bombardment – probably the first real bombardment of the war.

Four days against forty minutes; but the British were not only acting on different tactics they were also constrained by a severe shortage of shells, especially those of the heavier calibres. Production back in Britain was under the tight control of the War Office and Lord Kitchener constantly interfered with any possibility of allocating production to outside agencies.

Each of the batteries was allocated specific tasks and the entire bombardment was carefully coordinated.

The standard British field gun was the 18 pounder and these were allotted the task of trying to cut the wire in front of the German positions. As the ridge at which they were firing was only a matter of metres higher than their own position, the flat trajectory of their shells meant that their own troops in the front line were subjected to considerable stress as the rounds whizzed just above their heads.

The 4.5 inch field howitzers were to demolish the German parapet and the heavy guns and howitzers were detailed off to counter the German artillery as well as destroy strong points behind the line and out of range of the field pieces.

A lesson had been learnt at Neuve Chapelle : the advancing infantry needed artillery support with them and to this end light trench mortars and guns were organised to accompany the assaulting waves.

It must be remembered that at the time, even the Germans considered that Neuve Chapelle had almost been an astounding victory. The British were as optimistic as the French were in their ability to reduce the German trenches to nothing and advance over them.

The British were working on the maxim that:

…by means of careful preparation as regards details and thorough previous registration of the enemy’s trenches by our artillery, it appears that a sector of the enemy’s front line defence can be captured with comparatively little loss.

The near success at Neuve Chapelle in March 1915 had everybody in the British camp in high spirits. The German line could be broken.

The eternal problem to all their plans was however : the Germans. Their High Command had been severely shaken in March and they set about correcting the deficiencies in their trench system.

This being Flanders the word trench is misleading. The water table is less than a metre beneath the surface so instead of digging down the average trench was actually built up with a parapet at the front facing the enemy and a parados protecting the soldiers back. Both constructions were made up of sandbags which were both supported and strengthened by wire meshing.

The German command ordered a third Division to the sector in the immediate aftermath of Neuve Chapelle and the additional manpower was immediately put to work to strengthen the line. 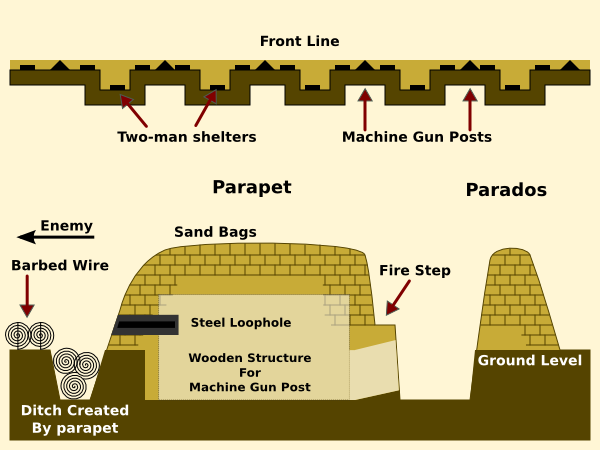 The parapet was raised to about 2 metres in height and strengthened to the point where it was five or even six metres wide. It was thus deemed to be impervious to all but a direct hit by a heavy shell.

Dugouts were also constructed every few metres, these were basically wooden crates capable of protecting two soldiers. They were sandbagged on top to bring the height up to that of the parapet.

Similar wooden structures were introduced into the line every twenty metres in order to house the machine gun crews. These boxes were V shaped with the apex pointing towards the Allied lines. Steel loopholes just above ground level gave the crews the ability to sweep the entire field of view with their machine gun.

In front of the parapet the barbed wire had been doubled in depth and further coils of wire were positioned in the ditches that had been created by the excavation of earth for the parapet sandbags.

The German soldiers worked with feverish intensity to get their position ready and the additional troops meant that they were not only extremely well prepared but stronger on the ground than had previously been the case.