General Haig was aware by 0800 hours that the assault on Aubers Ridge had not produced the desired results but was far from well informed as to just how bad the disaster had been. Enquiries to I Corps brought the reply from Major General Haking (whose 1st Division had just been severely mauled) that if the wire could be cut and the machine gun posts put out of action then he could repeat the attack in the afternoon.

Haig now drove to see General Willcocks at the Indian Corps HQ at Lestrem and was informed that the Dehra Dun Brigade which had carried out the morning assaults had been so badly damaged that it would have to be relieved.

It would take hours to move the Bareilly Brigade forward and so Haig ordered that a repeat action would take place at 1440 hours following another forty minute bombardment. Informed of the new timetable Haking ordered the 2nd and 3rd Brigades to send their reserve battalions forward.

None of these reliefs went unnoticed by the German artillery who pounded the British lines throughout the remainder of the morning causing further casualties and chaos. The Indian Corps was particularly pummelled and at 1120 hours Brigadier General Southey informed his HQ that he could not have the Bareilly Brigade in position and ready before 1600 hours.

The afternoon’s offensive was postponed until then. 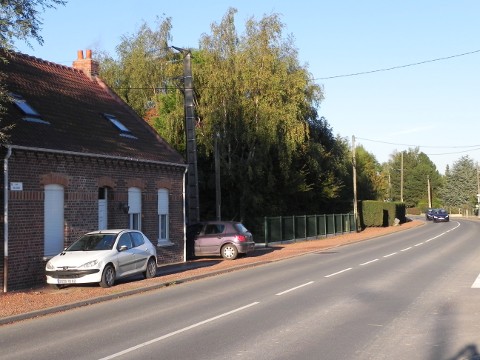 Chocolate Menier Corner, the right marker of the battlefront

On the other side of the battlefield the German 55th Infantry Regiment had suffered about 400 casualties during the morning and these were replaced by three companies brought up from billets (a German regiment like its French counterpart consisted of three battalions). Their hold on the position was now, if anything, stronger than earlier in the day.

At 1557 hours the two leading companies of the 1st Bn Black Watch advanced over the top of their own parapet, played forward by their pipers (Corporal J Ripley gaining the Victoria Cross for his part in the action).

They formed the right of the 1st (Guards) Brigade and arrived at the German parapet just as the barrage was lifted. Some breaches in the sandbags were found and the Scots poured in; but they were too few in number and on their own.

On their left the 1st Bn Cameron Highlanders had already messaged ahead that, having been sent towards the rear earlier in the day they would not get back to the front line in time for 1600 hours. They were told to go with whatever they had, as soon as they got there.

Just after the Black Watch arrived at the German front line about half of the Camerons reached the jumping off point and began crossing the battlefield. The Germans had recovered and were dealing with the Black Watch in their trenches whilst cutting down the advancing Camerons.

By the time the remainder of the Camerons had reached the front, forty minutes later, it was realised to be a pointless exercise to send them forward.

The 3rd Brigade to the left suffered a similar fate to their morning encounter. Sentries were watching for any sign of movement and the moment that the 1st Bn Gloucestershire Regiment and the 1st Bn South Wales Borderers climbed over the parapet the machine guns opened fire.

General Haking ordered another ten minutes bombardment at 1635 hours and wanted his men to attack again but both his Brigadier Generals declined. They knew that they could not succeed in carrying the German front line.

In the Indian Corps sector, Brigadier General Southey had his Bareilly Brigade in position just before the attack but could see that the German parapet was intact. He informed his Corps commander that the Germans were laying down devastating fire even whilst the barrage was still taking place and that he had already had over 200 casualties.

General Sir James Willcocks told him that he was to attack at all costs and keep the attack going all night if the situation so required.

The attack was led by the 2nd Bn Black Watch on the right, 58th Vaughan’s Rifles in the centre and the 41st Dogras on the left.

Hardly a man managed to get more than 20 metres and over the first deep ditch. The bridges sent forward in the morning had all been smashed and the murderous fire continued unabated. The Brigadier, true to his profession, made two more attempts to get his men forward, and then called a halt to the matter at 1640 hours.

Southey had been quite correct in his assessment of the situation. He lost over a thousand men killed and wounded in having to prove it.

The southern part of the great battle for Aubers Ridge was finished.