Webmatters : Battle of Festubert May 1915

The aftermath of Aubers Ridge

The spring of 1915 marked a low point in the relationship between Field Marshal Sir John French and his allies, Générals Joffre and Foch. The use of gas at Ypres on 22nd April 1915 had caused the left flank of the British Second Army to hang dangerously in the air following the collapse of the adjoining French sector. Despite a lot of noise from Général Foch (Commanding the French Northern Group of armies) he did not seem to be putting that situation to rights.

Further south the French were fighting for Vimy Ridge and the Douai plain. Their initial successes on the 9th May failed to herald the much sort after breakthrough and both Joffre and Foch leaned heavily on the British command to continue their offensive against the Aubers Ridge.

In fact the Field Marshal had already instructed General Haig to ensure that his First Army did just that and the matter was already in hand with the 7th Division transferred to I Corps in preparation for a limited attack around Festubert towards La Bassée.

But the British lacked artillery shells, decent guns and troops (divisions of which were being held back in Britain by Lord Kitchener who feared a German invasion).

Haig had realised with the failure of his 9th May offensive that he : did not have the means to attempt an assault on such a wide front; would not be able to attain a distant objective; and above all, could not advance without a lengthier bombardment of the German positions.

It seemed evident that a whirlwind bombardment may well offer surprise but it did not (at this stage of the war) offer sufficient grandeur to demolish well prepared fortifications.

Haig gave up on his two pronged approach to the offensive, concentrating (as had originally been considered) an attack only to the south of Neuve Chapelle. He also dropped the short bombardment. He now wanted at least two if not three days of constant shelling.

A provisional date for a second infantry assault on the target would thus be made on the 15th May. 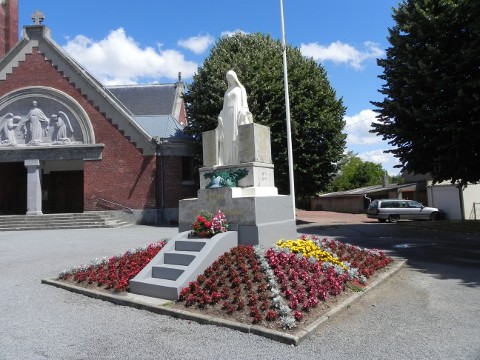 The village War Memorial in Festubert

To mollify the French, it was agreed that the British would relieve the French 58e Division on Haig’s right at Cuinchy. In order to ensure that Haig could continue his preparations without interference it had been hoped to carry out this relief with the Canadian Division which was brought down from Belgium (where it had been in the thick of the fighting during the 2nd Battle of Ypres).

But as the Canadian artillery was still engaged in Belgium and the French refused to leave without their own, the only solution was to move the 1st Division south of the La Bassée canal whilst part of the 47th (London) Division was moved in to cover northwards from the canal to the intended battlefield at Festubert. These two divisions were united under the command of Major General Barter (47th Div).

Haig could hardly have known that at the very moment that he was giving his orders for the attack on the German lines at Festubert that the French offensive was beginning to grind itself into the mud.

On the 12th May the Chapelle de Lorette (or at least its ruins) finally fell to Général Maistre’s soldiers, but elsewhere the bell was already tolling its dire warning of a struggle that would prove to be more ferocious and with losses far higher than Foch or Joffre could ever have envisaged.

Vimy Ridge had been retaken by the Germans and the village of Neuville Saint Vaast had been turned into a nightmare of hidden strongholds and interlaced trenches. On the 10th May Général Ernest Barbot a much loved commander and known as the Bayard of the War was killed in the front lines at Souchez. (Bayard was a knight, so noted for his chivalry that his name became part of the French language).

All of this was unknown to General Haig who felt obliged to support the successes already gained by the French.