Neuville-Saint-Vaast is a village 6.5 kilometres north of Arras, a little east of the road from Béthune to Arras (D937). Continue through the village towards Souchez. At the crest of the hill you will come to a Polish Memorial and the Czechoslovakian Cemetery opposite. There is sufficient parking for a vehicle in either direction.

This is an extremely busy and fast road. Children or pets should be well supervised at all times in particular if crossing the road. 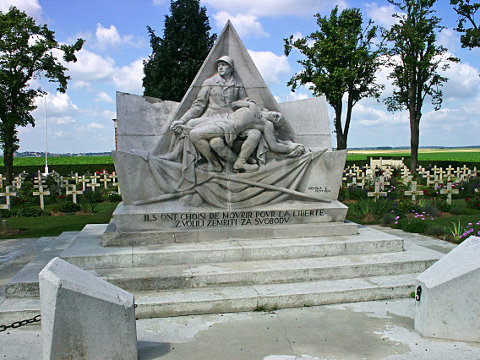 If you have been up to the Canadian memorial at Vimy Ridge (which is visible on the horizon behind the Polish monument) then you may well have wondered about the large memorial at Hill 145 to the men of the Moroccan Division.

To them it was known as Cote 140 or Hill 140, and whilst the Canadians did indeed score a magnificent victory there, the men of the French Foreign Legion who were attached to the Moroccan Division had already gained the summit in May 1915.

The right of their Division was positioned in the general area of the French Military Cemetery at La Targette and extended towards the north-west and a place called Berthonval Farm which can be seen if you look towards the twin towers of Mont St Eloi directly behind the Czech cemetery. 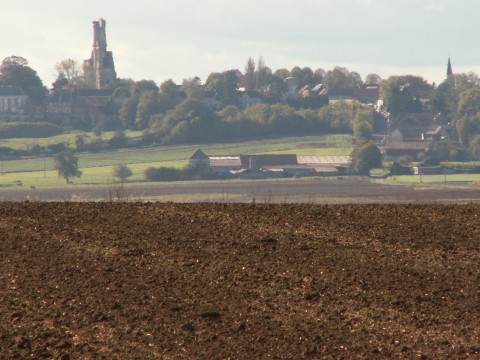 In the valley in front of the ruins is a large farm to the left of a wood; this is Berthonval Farm (Which would serve as General Byng’s HQ in 1917).

The Legionnaires’ route towards the summit of Vimy Ridge would take them across the main road in the area of their two monuments.

Within this small cemetery lay the remains of 206 Czechoslovakians. Seventy from the First World War and 136 from the Second (Including twenty-nine airmen).

Czechs and Slovaks were minorities within the Austro-Hungarian Empire and at the declaration of war hundreds living in France took the decision to fight for France within the ranks of the Foreign Legion.

They formed the Nazdar Company (Coming from their battle cry meaning: Hello) 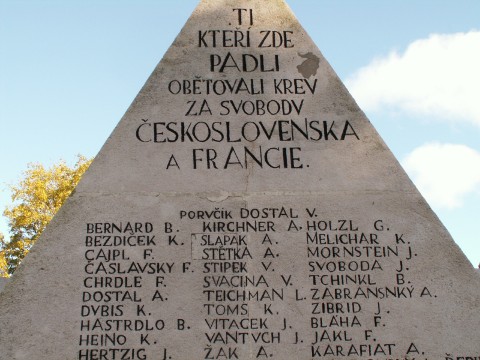 On the 9th May 1915 the Company would lose 50 men killed and 150 wounded out of a strength of 250. Amongst the killed were their Standard Bearer Karel Bezdicek and Lt Dostal the first Czech officer to be killed. Bezdicek, accounts would have us believe, was hit by a shell and died within the German trenches wrapped within his standard showing the Czech Lion. 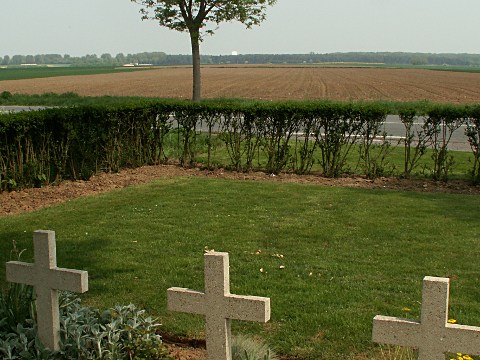 The few remaining survivors following the battle stayed in the Legion until passing into their own army on the creation of Czechoslovakia in 1918. 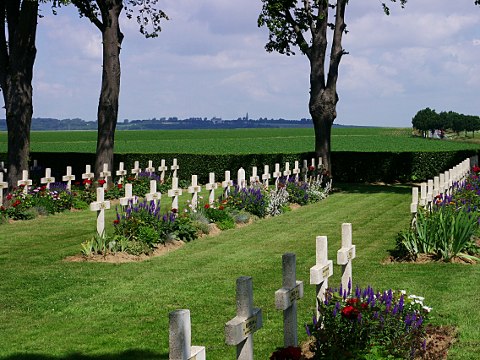 The basilica and lantern tower of Notre Dame de Lorette

At the beginning of May each year there is a short ceremony at the cemetery which was enlarged in 1970 by the consolidation of all Czech and Slovak nationals buried in France. 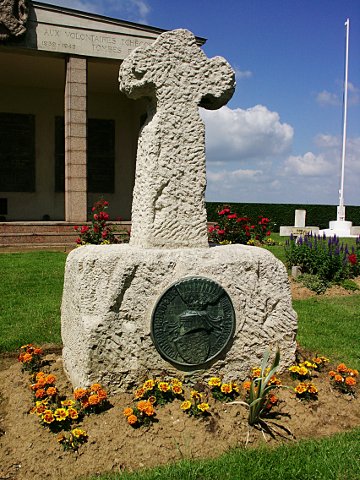 The saga of the Bohemian Cross

Towards the rear of the graves you will see a small cross honouring King Jean of Bohemia who died fighting for France during the Hundred Years War. The war was a direct consequence of English claims to parts of Normandy and France.

In 1346 Edward III of England invaded via Normandy. By the 26th August his army had reached the Somme and at Crécy en Ponthieu he found himself opposed and outnumbered by Philip VI of France.

Edward’s army numbered about 12,000 men with his opponents more than treble that according to some sources. Regardless of figures, it is accepted that the English army was a lot smaller than the French.

Edward chose his position carefully on the slope of a small hill with plenty of natural obstacles on both his flanks. On the ridge and behind his army was a windmill which Edward used as his headquarters.

His orders for the day were that the army would fight on foot, and that it would be divided into three groups, with his sixteen year old son, The Black Prince, in command of one of them.

Trenches were dug in front of the army and caltrops laid to bring down the French cavalry. The weapon which was to prove so decisive was the longbow used by Edward’s Welsh archers and these he had placed on his flanks covering his infantry in the centre.

The first move made by Philip was to send his Genoese crossbow men forward in an attempt to disrupt the English infantry before the French nobles on their horses put in their winning charge.

The crossbow however was no match for the longbow. With a greater range, the longbow had a firing rate of perhaps 10 or 12 arrows a minute in the hands of an expert to the 3 or 5 of the crossbow. The Genoese retired with heavy casualties and Philip sent in his cavalry. The French nobles were met by a wall of arrows which when added to the trenches and other traps and pitfalls laid by Edward’s men completely broke down the charge. Several attempts were made to break the English line but all ended in failure.

By the end of the evening a wounded Philip VI ordered his army to retreat.

Ich Dien and the three plumes of Wales

One of the legends of the battle is that of the 80 year old King Jean of Bohemia who had rallied to the French cause and insisted that he be allowed to strike at least one blow against the enemy – despite his being blind!

His retainers tied all their horses together and led him into battle. There he fell in combat but not before he had smitten a goodly few of the English.

The Black Prince was so impressed by the old king that he took the three ostrich plumes from the king’s helmet and took up his motto : Ich dien

The original cross still stands on the road side at Crécy near to the point where King Jean fell. This one in the cemetery is a copy and evokes the centuries of aid given by one country to the other.