Souchez is a village 3.5 kilometres north of Arras on the main road to Béthune. The cemetery is about 1.5 kilometres south of the village on the west side of the D937 Arras-Béthune Road.

This is a very busy road and you should note that, coming from Arras, it is illegal to cross the road into the parking area.

It would be better to visit Notre Dame de Lorette first and then, having visited General Barbot’s monument in the village on the way out, stop at Cabaret Rouge.

Also to be noted as you climb the hill out of Souchez : You are still in the 50 kph zone of Souchez Village. I have seen the radar deployed from the top of the hill ready to catch motorists speeding past heavy goods vehicles. Do not say you have not been warned. 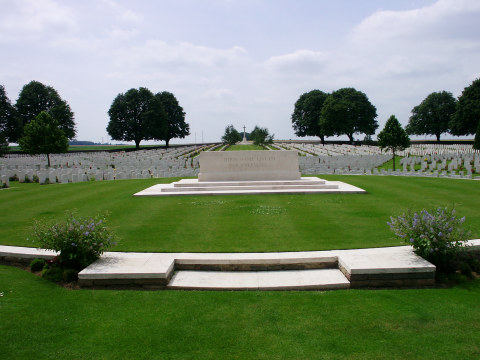 Souchez was sacked more than once in the Middle Ages, and raided by the Germans in December 1870.

It was captured by the French on the 26th September 1915, and the area was taken over by British troops in the following March. The village was completely destroyed.

Cabaret Rouge was a small, red-bricked, red-tiled café (the word cabaret did not originally necessarily mean that there would be entertainment) that stood close to this site in the early days of the First World War. The café was destroyed by shellfire in March 1915 but it gave its unusual name to this sector and to a communication trench that led troops up the front-line. 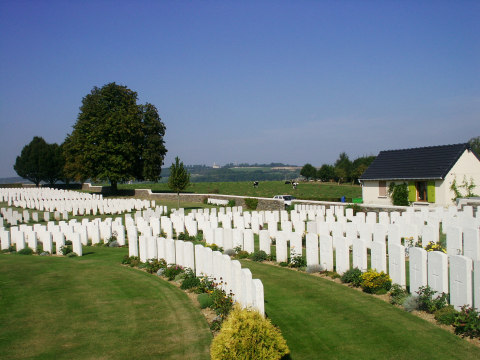 Commonwealth soldiers began burying their fallen comrades here in March 1916. The cemetery was used mostly by the 47th (London) Division and the Canadian Corps until August 1917 and by different fighting units until September 1918. It was greatly enlarged in the years after the war when as many as 7,000 graves were concentrated here from over 100 other cemeteries in the area.

For much of the twentieth century, Cabaret Rouge served as one of a small number of open cemeteries at which the remains of fallen servicemen newly discovered in the region were buried. Today the cemetery contains over 7,650 burials of the First World War, over half of which remain unidentified. 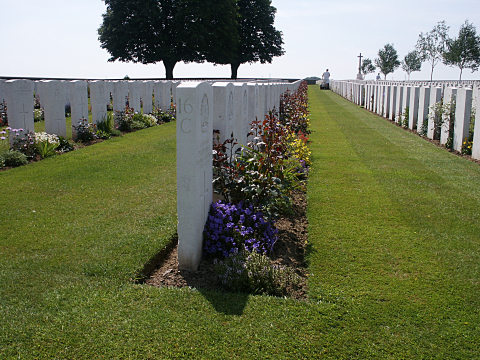 Many different Commonwealth units served in this sector during the war and the cemetery contains the graves of British, Irish, Australian, New Zealand, Indian and South African soldiers. It is also the final resting place of over 70 officers of the Royal Flying Corps and Royal Air Force. Cabaret Rouge has a particularly close connection with the Canadian Infantry, however, as hundreds of Canadians who were killed at the Battle of Vimy Ridge in April 1917 were ultimately laid to rest here.

The cemetery and shelter buildings were designed by former Canadian Army officer Frank Higginson. Higginson worked as an architect for the Commonwealth War Graves Commission in the 1920s and later acted as Secretary to the Commission. 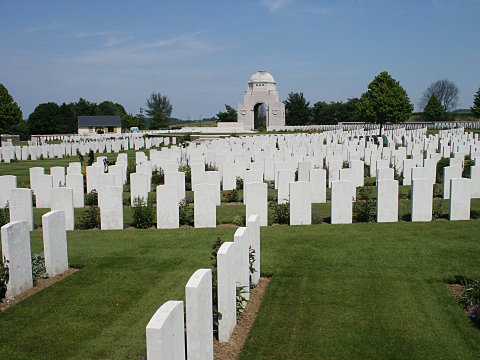 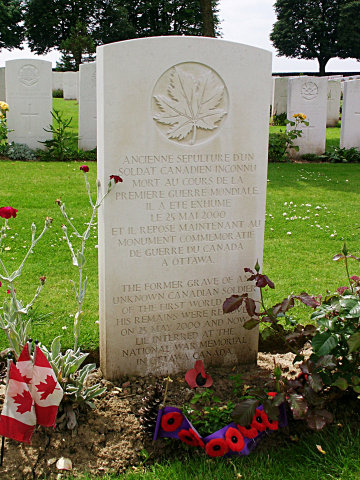 On 25th May 2000 the remains of an unidentified Canadian soldier were entrusted to Canada at a ceremony held at the Vimy Memorial, France.

The remains were laid to rest within the Tomb of the Unknown Soldier, in a sarcophagus placed at the foot of the National War Memorial, Confederation Square, Ottawa, Canada. A focal point for remembrance, he represents more than 116,000 Canadians who lost their lives during the First World War. 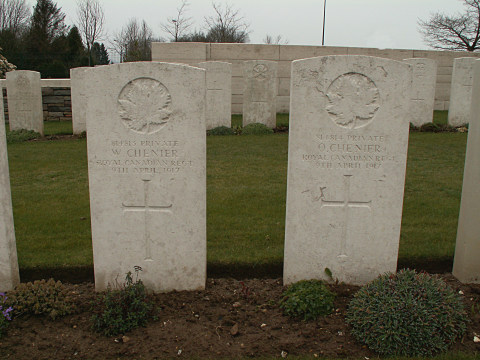 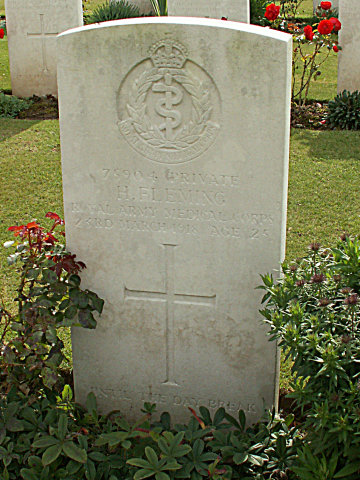 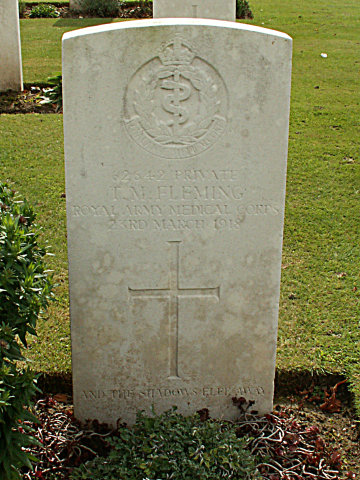 Sons of Thomas and Janet Fleming of 22 Caldew St Carlisle, Cumberland
Until the day break
And the shadows flee away
Grave: VIII R 16
Grave: VIII R 17
Their joint inscription running from one grave
to the other is thought to be unique 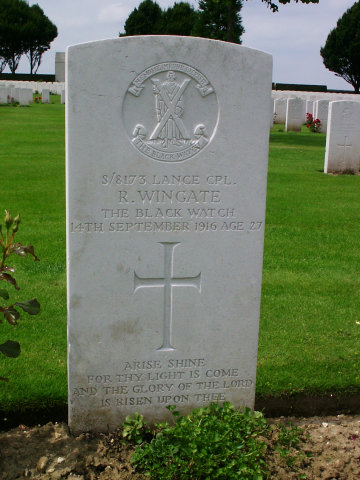 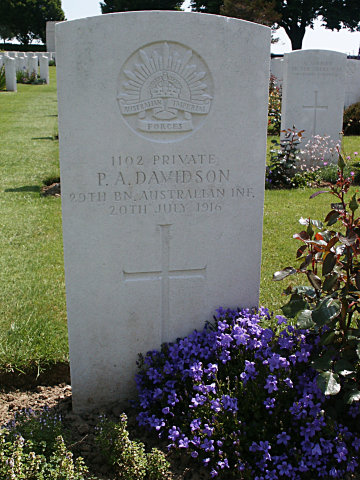 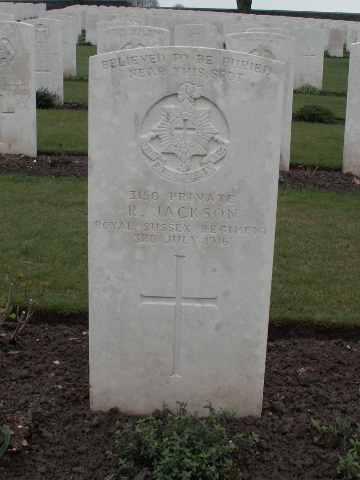 Both Ralph and his brother Reginald took part in the abortive Boar’s Head attack at Richebourg on 30th June 1916. Both were wounded and both died of their wounds on the same day. Reginald is buried at Wimereux. Grave: I N 14A. 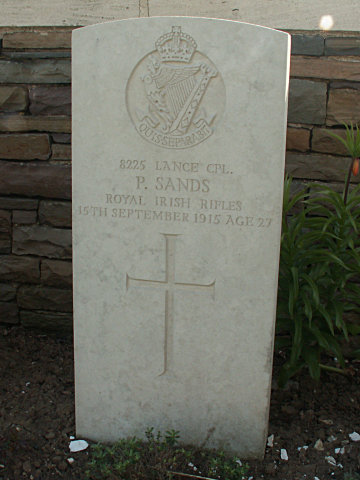 Having joined in 1906, Lance Corporal Sands was granted 4 days leave from his Battalion in France on 26th February 1915, but did not return on 1st March as arranged. He was subsequently arrested in Belfast on 7 July 1915, and was then returned to his Battalion in the field for courts­martial.

Sands stated that he reported to Belfast Depot on 2nd March 1915 as he had lost his warrant card and could not return to France without a new one. Sands stated that in the 4 months he spent in Belfast he always wore his uniform—so he was not trying to hide.

Sands’ CO gave him an excellent character reference, both as a fighting man and in normal
situations. He also states that while it is not possible to say that the offence was deliberate, he did miss heavy fighting in May, and was gone for over 4 months.

He was shot and buried at Fleurbaix but like Wishard below his body could not be located after the war and he is commemorated here together with the other missing of Fleurbaix Churchyard. 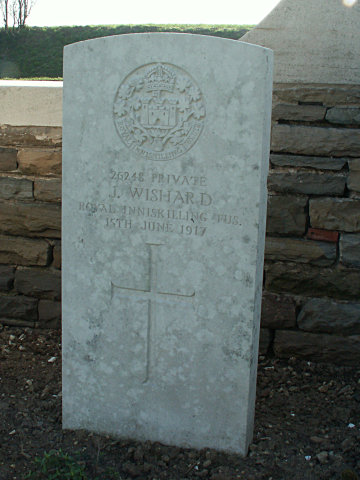 The fact that he had changed into civilian clothes would have counted heavily against him and despite his plea that his son was ill the court found against him and he was shot at Merris.

He stated : “It was only worrying about my child that made me absent myself. It was not through cowardice”. In evidence as to his character, his CO stated that he had known Wishard for four months and that he viewed him as a good character, and that he had always done well in the trenches. Wishard was found guilty on both counts of desertion and the sentence was confirmed without any additional comment.

Following the war it was impossible to relocate his body and so he is commemorated here.

It will be noted that despite their fate, each of these two soldiers has been honoured in death no differently than his comrades alongside.