The memorial is located in an area known as le cagin, on a back road leading behind the German Soldatenfriedhof at Maison Blanche, Neuville-St.-Vaast.

Coming from Arras take N 25 Rocade towards Béthune. At the major roundabout on the outskirts of the town (an area known to the British as Madagascar) take the first exit towards Écurie (D60). When you reach the Godefroy factory turn left onto the D49E1 towards Neuville-St.-Vaast.

After about 1500 metres you will see the memorial under two trees in Rue Augustin Leuregans. Continuing straight on will bring you into Neuville-St.-Vaast, where you turn left and then right at the Mairie for the Canadian Memorial.

Coming from Vimy or Neuville-St.-Vaast turn at the Mairie/War Memorial following the signs for Écurie. A short distance later you will then turn right onto Rue Augustin Leuregans. 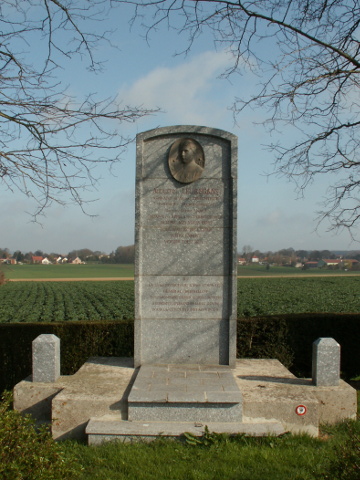 Born on the 26th December 1896 at Cambrin (not very far away near Béthune), he was serving with the 236e Régiment d’Infanterie (RI).

This sector formed part of the infamous Labyrinthe which covered the area between Maison Blanche (Now the German Soldatenfriedhof) as far as Écurie. A criss-cross pattern of trenches, tunnels, bunkers, machine-gun posts and fortified positions; the ensemble was formidable and had cost the French 26e RI hundreds of casualties since they commenced their attack on the 9th May. They were relieved by the 236e RI on the 24th May.

On the 30th May 1915 the 236e RI was given the task of carrying the Hambourg Trench and then advancing on Eulembourg Trench in the field over to your right.

Sheltered in a dugout under heavy shell fire the granddads were in two minds about continuing the advance.

In order to shame them into following him he shouted out :

Surely, my old dads, you aren’t going to let your youngster die alone are you ?

Leaping out of the safety of his shelter Leuregans was killed almost immediately and his body was never recovered. His call to arms though had the desired effect and his men took up the fight once more.

Although some progress was made the attack was halted with a loss of 460 killed and wounded. 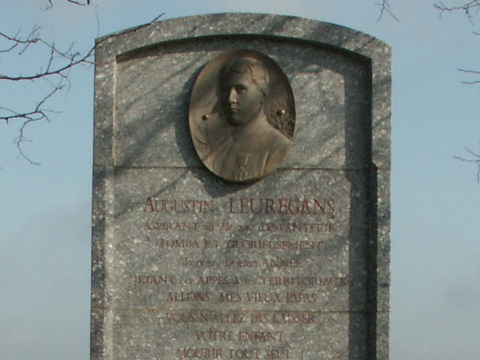 The monument is dedicated to Augustin Leuregans who was killed on 30th May 1915 leading his men forward. It was raised by his family and by donations from veterans of the 53e Division d’Infanterie.

It was inaugurated by Général Berthelot on 30th May 1926.

On another plaque you can read :

Here the 53e Division of the 20e Corps under the orders of général Berthelot and the higher command of général Balfourier fought during May and June 1915 for the conquest of the Labyrinthe.