Neuville-St Vaast is a village 6.5 kilometres north of Arras, a little east of the road from Béthune to Arras (D 937). On arriving at La Targette turn right following the signs for the Canadian Vimy Memorial. In the centre of the town you will see the Mairie (Town Hall) on your right at the junction.

There are numerous memorial plaques on the wall. 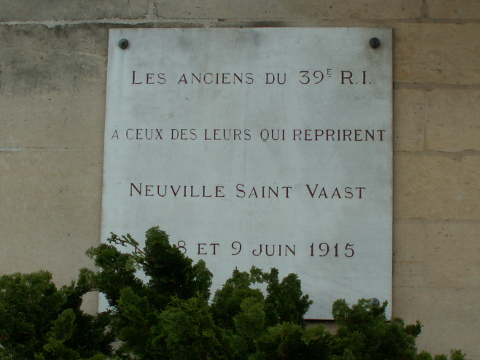 The 2nd Battle of Artois was launched on the 9th May 1915 and within a couple of hours the French 11e Division d’Infanterie (DI) had forced their way to the southern outskirts of the village.

On the 7th June the 39e Régiment d’Infanterie (RI) was moved up from Maroeuil to Neuville where it relieved the 129e RI. The Second Battalion was stationed in the south of the village whilst the First and Third were sent into the village itself.

The orders were that the Germans were to be harassed day and night by a roulement of troops from the reserve line to the front line. A blockhaus near the far end of the modern Rue François Hennebique was proving a formidable obstacle and the two battalions were ordered on the 8th June to secure what were known as Houses D11 and D12 (the last two houses on the right at the far end of the street).

It is an indicator of the tenacity of the Bavarian defenders that all the French War Diaries talk about particular houses rather than streets. The houses were numbered off on the French maps for easy identification.

The final assaults on the Rue du Canada had begun. Many of the houses were taken but the all important attack on the blockhaus had to be postponed until late evening because of a lack of artillery preparation and even when it was provided it was considered to be insufficient.

At 0800 hours the following morning a battery of 75mm field guns and 58mm mortars began pounding the bunker. When thirty minutes later the infantry charged the position they found that the Germans’ ardour had been worn thin over the previous twenty-four hours of near constant torment. Most fled leaving just a handful courageously manning the post.

By 1000 hours the 39e RI were in control of the village. Amongst the equipment captured were three 77mm field guns, three minenwerfer, grenades, shells and rifles. Their own losses amounted for the three days to 154 killed and 410 wounded.

This plaque and that for the 39e RI were unveiled in June 1930 in the presence of the renowned French author Roland Dorgelès (Les Croix de bois: 1919) who served with the regiment.

The veterans of the 39th Infantry Regiment to their comrades who retook Neuville Saint Vaast the 8th and 9th June 1915.

During the inauguration the gathering were reminded of Général Mangin’s General Order No 89.

Soldier of the 5th division, your drive and superb, tireless tenacity have realised my anticipations. You have seized the remains of Neuville-Saint-Vaast, a powerfully organised village and have demonstrated that there is no obstacle to French courage. The general commanding the army congratulates you. Thank you. I salute those who died for their country and amongst all of these heroes, Colonel Denis-Laroque who fell at the head of his magnificent 129e RI. You will reform your diminished ranks and many soldiers will recall the story of your exploits and prepare you for other battles which will be decisive.