Webmatters : Memorial cross to the 15th Battalion CEF at Écurie

At the large roundabout on the Arras ring road (N 25/N425) take the side road towards the village of Écurie. You will already be able to see a large transport firm and the cross is situated on the grassed area immediately opposite.

Behind the village church is a memorial to an RCAF Halifax which crashed in the village in 1944.

Note that the small parking area is for the Fire Brigade as the water tank is under the grassed area.
Use the larger parking bay built by the Commune. 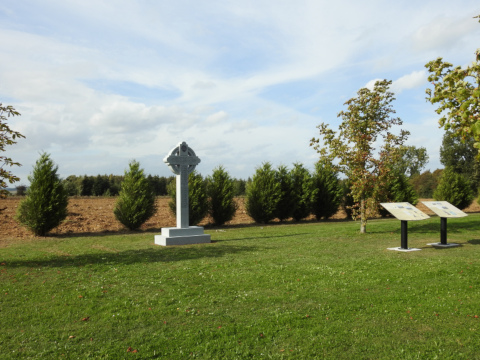 The Battle of Arras began on the 9th April 1917. For their part in the offensive the Canadian Corps were required to assault Vimy Ridge. The ridge stretched away from the front line and the Canadian 1st Division had a lot of open ground to cover before reaching it.

In the centre of the 1st Division the 15th Battalion Canadian Infantry had a gentle slope in front of them. Their initial objective was just beyond the Arras-Lens Road. From there they would continue on to the area near the current Autoroute exchange.

The attack went according to plan and soon the battalion was gathering its dead and organising burials.

As part of its commemorations the battalion raised a wooden cross naming many of those who had died in the assault. That cross survived the war and can now be seen in the Regimental Museum of the 48th highlanders of Canada in Toronto.

For the full story of the cross follow the link or use the menu above.

The cross stands at just over two metres high and mimics the proportions of the original. It is made of granite and was engraved in Canada. Whilst the actual detail has been slightly changed, the list of names is the same as the 1917 inscription.

It is accompanied by two large explanatory panels which help orientate visitors to the ground as well as relating the story.

It was inaugurated on the 22nd September 2018 by members of the 15th Battalion Memorial Project in the presence of Brigadier General Greg Young, serving and veterans of the Regiment, local officials and villagers.

After weeks of hot dry weather, it was almost a given that the only evening it would pour with rain was that set aside for the inauguration. The theory was that the sun would go down behind the cross creating a dramatic finale to the evening. The best laid schemes o’ mice an’ men, gang aft agley.

Despite the very wet weather and strong wind there was a large turn out as wreaths were laid on the village’s RCAF Halifax Memorial and the village memorial before everybody set out on foot for the cross. Shelters were put up, by the Maire and his staff, to help people keep dry and the ceremony was limited to the essentials, leaving speeches for afterwards in the village hall.

Presentations were made, with the commune receiving a statue of a Highlander in ceremonial dress and the Regiment receiving an inscribed plate commemorating the event.

There had been moments when it looked as though all the planning would collapse and the Project and Regiment owe a great deal to the village of Écurie for their willingness to take on the location of the project at such short notice.

If you turn left at the crossroads the back road takes you along the Canadian Support Line into Neuville Saint Vaast. A track off to its the right takes you to the front line.

Continuing across the junction and through the village brings you to a roundabout. Turn left and then take the farm track immediately in front of you (avoiding the dual carriageway) will bring you to the Arras Road Cemetery and then Nine Elms Military Cemetery. 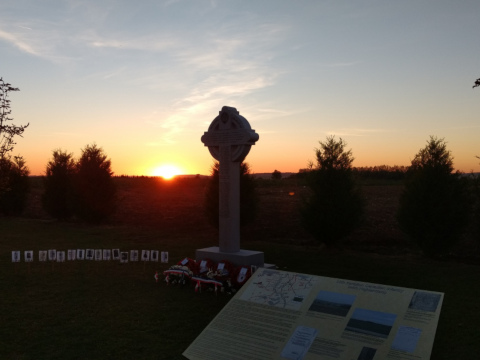 The cross at sunset

The 15th Bn CEF were sponsored by the 48th Highlanders a militia unit from Toronto. The regiment has demonstrated its continuing interest in commemorating its First World War combatants by the raising of plaques across the Western Front.