The village of Écurie is approximately five kilometres north of Arras.

From the main Arras — Béthune road roundabout (N 25 / D 937) take the exit for the village. You will see a Canadian cross on your left and a transport base on your right. Continue into the village and turn left just before the church.

At the bottom of the street drive between the two left-hand corner buildings. You will think you are driving into a farm, and essentially you are. Within a hundred metres you will come out into a field and children’s play area. The memorial is immediately on your right. 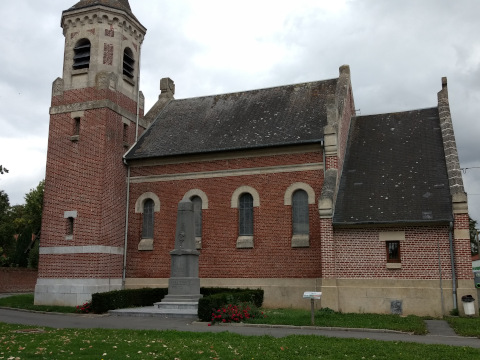 The local church and war memorial

Écurie spent much of its time on the front line during the Great War, during which it was completely destroyed. It saw much fighting in 1915 as the French attacked (and finally took) a complex system of trenches and tunnels known as the Labyrinthe in the open fields along the road towards Neuville Saint Vaast.

On the 9th April 1917 it marked the dividing line between the Canadian Corps (to the west) and the 51st (Highland) Division (to the east). In the Spring of 1918 the Canadian Corps were back again during the German offensives of March and April.

There are a number of Great War burial sites within a ten minutes drive, including the largest German Military Cemetery in France. The Canadian Vimy Memorial Park is within easy reach and should be considered something not to be missed.

The village was on the route of retreat by the BEF in 1940 as it fell back from Arras to Dunkerque. 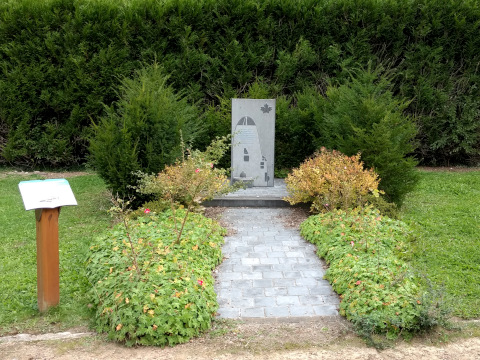 At 2315 hours on 12th June 1944 the crew set out from RAF Leeming in Yorkshire as part of a bombing raid on the railway system at Arras.

Having Carried out its mission the crew turned about and headed for home. At about 0500 hours (13th June) in the area of Sainte Catherine (which is on the far side of the large roundabout you probably used to get here) the squadron came under enemy fighter attack.
Passing over Écurie one of the wings, already on fire, fell away and the remainder of the aircraft fell into the field adjacent to the monument.

Later that morning a dispute took place between the villagers and the German authorities about what to do with the crew. In the end the remains were placed in the church before being buried in the local cemetery.

Only one of the crew, Sergeant Taylor of the RAF, is still buried there. The others were removed to the Calais Canadian War Cemetery at Leubringhen. Leubringhen is just off the autoroute between Boulogne and Calais it is one of the few WW2 cemeteries in this area of France.

The memorial was conceived by the village and was inaugurated on the 4th November 2012. 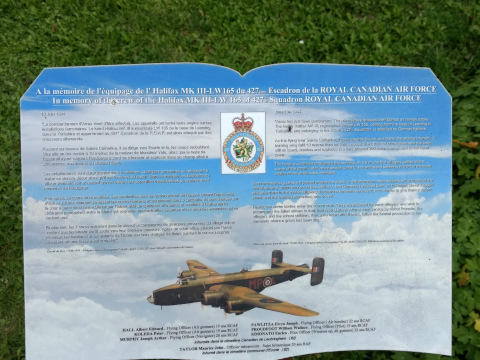 The explanatory panel is in French and English