Webmatters : Memorial cross to the 15th Battalion CEF at Écurie : The new cross

Even before the return of the original cross back to Toronto in the Spring of 2018, the idea was put forward that some form of replica should be created. The original was far too fragile to be returned permanently to the battlefield and whatever replaced it would have to be durable. 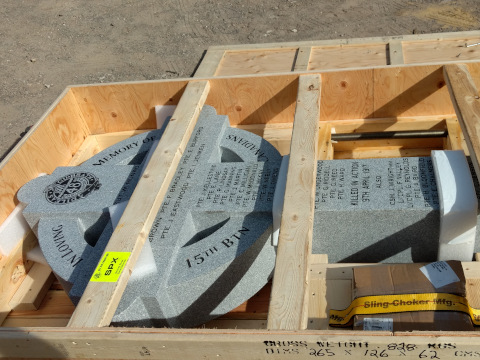 The cross weighs three-quarters of a tonne

A number of possible materials were considered and sadly many had to be put aside because of the possibilities of theft. Ultimately the decision was made to have a cross created in granite. It would not fully replicate the original as it would not be possible to engrave the same amount of detail into the stone as had been written onto the wood.

There was also the matter of who should be engraved on it. All of those who are now known to have been Vimy casualties or the original incomplete listing ? Perhaps none at all !

There is so much mystery behind the construction of the original and where it was placed that the logical answer seemed to be : leave the names as they were on the wooden cross. To make the wording more legible a simpler style of lettering would be used. The regimental numbers would be replaced by the rank and any initials would be reduced to just one per soldier. A few minor spelling errors would be corrected.

Then came the question as to where to place the cross.

The Memorial Project has always tried to satisfy three requirements for its monuments :

There is very little point in having a memorial placed on the historical location if nobody can see it, or easily access it. The site needs to be protected against passing traffic or accidental damage. Finally, no matter how well situated, if visitors cannot park their vehicles the site becomes redundant. 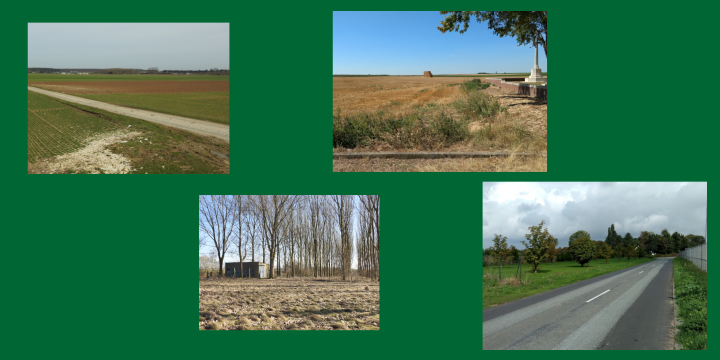 Top : The farmers’ dump on the Chemin de Meuniers ; alongside nine Elms Military Cemetery
Bottom : CA 39 today opposite the cemetery ; the park at Écurie

There is a small wooded area on what used to be CA 39 but it is difficult to access. As it is on the far side of a busy dual carriageway from Nine Elms Military Cemetery, which is far from easy to reach in its own right, the location was never really in the running.

In the end three sites were considered.

The first two were historically perfect, and the second almost ideal as the dead lay in the cemetery. Unfortunately both were only accessible by farming tracks and the first offered no protection at all from farming machinery. The second was hardly any better as tractors would be passing within a metre or so of the ensemble.

There were also complications with trying to place a memorial so close to a CWGC Cemetery. This goes contrary to standard CWGC policy and despite months of negotiating with them at the highest levels they eventually informed us that they could not support the erection of the memorial in the only plot available — alongside their car park.

The third location became the subject of negotiation with the village of Écurie. Two points were raised. The 15th Battalion’s section of the front was just outside of the Commune which only extends as far as the access road (Vase Avenue). That placed it inside Neuville Saint Vaast. Secondly, the park is outside the Canadian front. The Divisional boundary placing it within 51st (Highland) Division’s area in April 1917.

The counter-argument stated that whilst 3rd Canadian Brigade was located outside it, 2nd Brigade’s front was almost entirely on Commune soil. Nine Elms Military Cemetery is in Thélus. Its access road is in Roclincourt but the simplest entry route is via Écurie from the major roundabout that leads from Arras to all the major battlefield sites.

There is a strong tradition of commemorations for the Scots in Roclincourt and a new Celtic cross for Scots Canadians would enhance that sentiment. 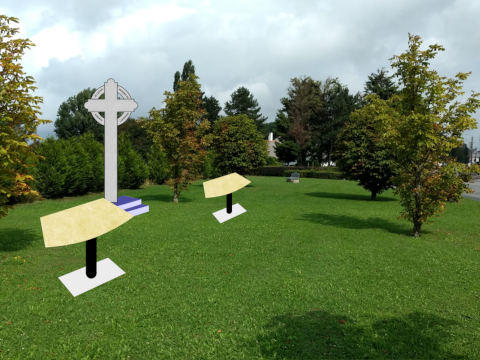 Within a few hundred metres of the roundabout the site is easy to access. Continuing straight on would lead the visitor to the cemeteries or turning left would take them along the Canadian reserve Line into Neuville Saint Vaast and the Vimy memorial.

The location would also help visiting Canadians to understand that half of their Corps began their assault on Vimy Ridge by traversing a lot of open ground just to reach it. There is an immediacy to the trenches and monument within the Canadian Park that give a very false impression as to what many Canadians encountered that 9th April.

We know that in June 1918 the 15th Battalion were in the village preparing the defences against the German Spring Offensive so there was a connection albeit at a later stage of the war. It was also discovered that the village already had a Canadian memorial in the form of a monument to an RCAF Halifax that had crashed in the village in 1944.

All that aside, the park is pretty, it has parking, the cross would be far from vehicles and the sun would set immediately behind it. 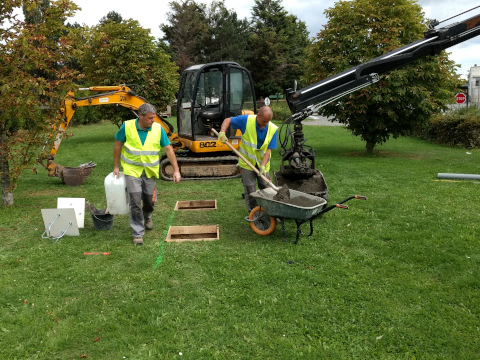 The Maire, M Jean Michel Caillierez, gave the consent of his council and work was immediately begun with a view to meeting the inauguration date of 22nd September 2018.