Webmatters : Memorial cross to the 15th Battalion CEF at Écurie : The location of the cross

In preparation for the centenary commemorations in 2017 Veterans Affairs Canada constructed a new visitors’ centre close to the Grange Tunnel system and opposite the previous building.

A proposal was put forward to the centre, offering the loan of the 48th Highlanders’ Vimy Cross for twelve months.

The offer was gratefully accepted and preparations to ship the cross back to France were begun in the presence of a camera crew from CBC.

On a sunny but chilly February morning the cross arrived at the VAC-ACC administrative centre at the Memorial Park.

Prior to its departure the case had been decorated by members of three families connected to mentioned casualties.

Fifty-seven poppies were placed on the packing, each representing a name on the cross.

The cross was not destined to be put straight into storage, for the following day, with a permanent eye on the weather, the cross was taken back out onto the battlefield. 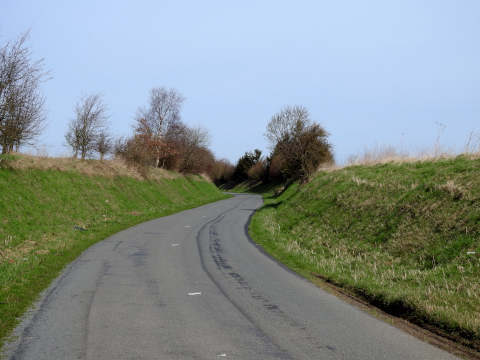 The main road between Neuville and Écurie is still a sunken road where Elbe Trench used to be, the track leading alongside Vase Avenue is still there, as is the Chemin des Meuniers which was just behind the Canadian Front line. 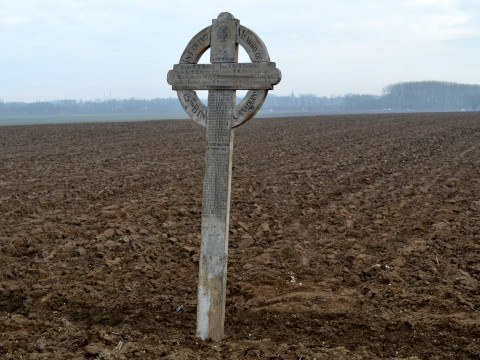 The ground has changed so little in layout since 1917 that it is possible to calculate reasonably accurately just where everybody was. A hundred metres or so down the road from the junction of the two tracks and somewhere beneath it was the Douai Tunnel. Neither it nor the Bentata Tunnel have ever been recovered.

In the distance is Nine Elms Military Cemetery and the Autoroute interchange. From the field in front of the track the 15th Battalion had commenced its assault.

The field was ploughed, deep furrows of mud leading back and forth across the ground. As the exact location of the cross will never really be known a decision was made on the basis of the only known burial references ; those made by Major Creggan near the front line.

The cross was carefully taken out of its packing case and supported by wooden batons to hold it upright. It was stood in one of the furrows to hide the fact that it was sitting on a suitably brown doormat. Post-production would remove the wooden batons !

From uncertainty to clarity. The second phase of this battlefield tour was to take the cross back to Nine Elms Military Cemetery where we know exactly where it had been located ; in front of the first three graves inside the gate. Three graves that are 15th Battalion casualties who are not mentioned on the cross !

It had been an exceptional day, the weather had been more than kind. Very windy and February cold but the only mizzle of rain encountered had come down as we travelled down to Nine Elms. There had even been moments of sunshine as the cross was carried into the cemetery, reunited once again with those whose names are etched upon its timbers. 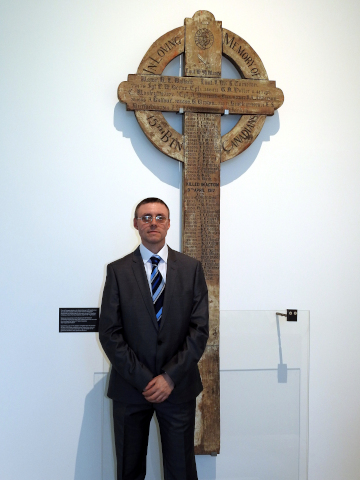 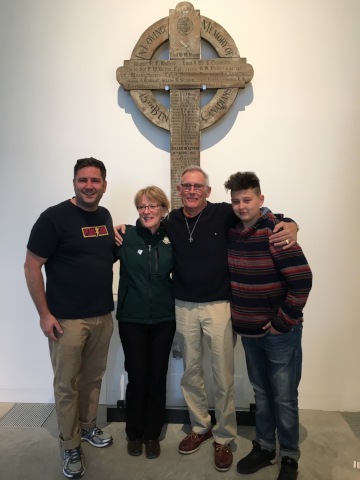 From there it was back to the Memorial Park and storage for the next few weeks as the centre’s displays were organised. 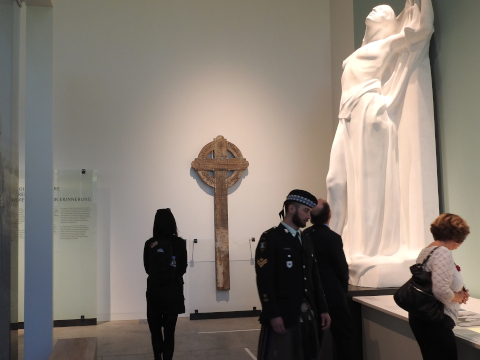 On the 8th April 2017 the new centre was officially opened and two days later its doors opened to the public for the first time. 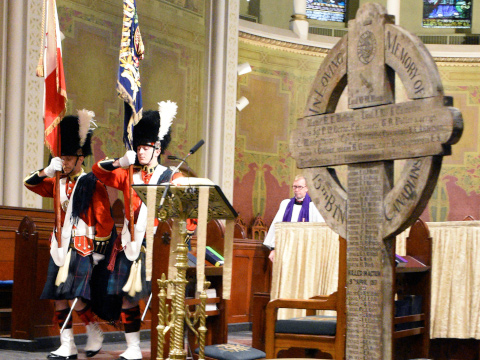 The cross remained in France until early 2018 when it was returned to Canada and welcomed back by the Regiment during its annual church parade.