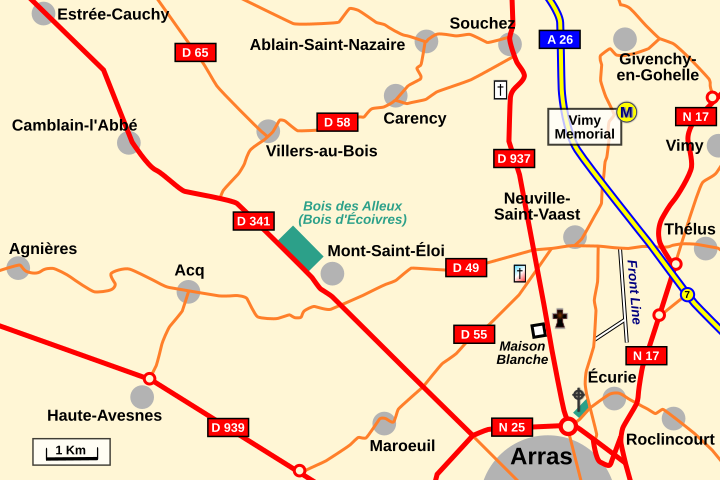 In the weeks running up to the 9th April 1917, the 15th Battalion Canadian Infantry was billeted near the village of Estrée-Cauchie, to the north-west of Mont St Éloi.

In its preparation for the coming battle, the entire battalion was familiarised with the ground over which it would attack by practising on replica trench systems. In the remaining days before going into combat those soldiers who were specialists with machine guns or grenades were given additional training, whilst all ranks underwent practical training in battlefield manoeuvres.

On the evening of the 5th April, three of the four companies moved up to the quarry at Maison Blanche. This underground cave had been captured by the French in 1915 but was never used by them. The Germans seem to have been unaware of its existence, which is surprising considering their elaborate defensive system called the Labyrinth on the far side of the road. 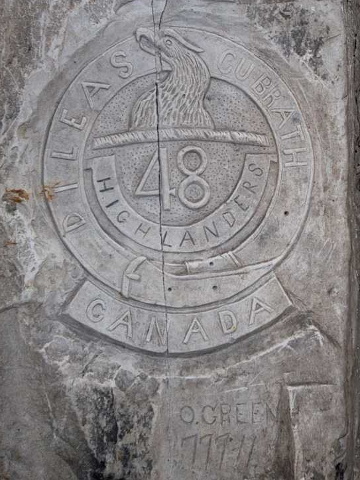 Carving of the 48th Highlanders’ Badge by Oscar Green

The chalk walls of the quarry allowed many a soldier to leave his mark in history and many of these carvings are quite exceptional.

On the 15th August 1917 during the Battle of Hill 70 the Battalion’s lines were infiltrated by a party of Germans, threatening Colonel Bent’s Command Post. In the trench Lance Corporal Oscar Green raised the alarm and charged the Germans with nothing more than a broken rifle (without bayonet). The commanding officer was saved but Oscar Green died of his wounds. He is buried in Béthune Town Cemetery (Grave: VI G 2).

The duties were rotated, with one company in the front line, one in Elbe Trench (a sunken road), acting as support and the reserve company in Maison Blanche. Battalion Headquarters was placed in the Douai Tunnel, one of two tunnels along this section of the front, prepared by the Royal Engineers and used as sheltered access to the front line.

Nine Elms British Cemetery can be seen on the left.
The Lens-Arras Road immediately behind it. The radio tower is the Autoroute exchange.
Far in the distance is Vimy Ridge’s eastern edge

Immediately in front of the Highlanders of the 15th Battalion was a gentle slope down towards the Arras–Lens Road. There were a number of small craters which had been caused by mining operations and the German front line was within a hundred metres.

Because Vimy ridge was angled away from the Allied front line, the 1st Canadian Division forming the right flank of the Canadian Corps would have three kilometres of open ground to cross before reaching the eastern edge of the ridge. The 15th Battalion was almost in the centre of 1st Division’s disposition with 2nd Brigade on its right and the 14th and 16th Battalions on its left.

In the late hours of the 8th April, No. 3 Company marched up from the Bois des Alleux as the entire battalion prepared itself for the morrow. Lieutenant Colonel Charles Bent, commanding the 15th Battalion, deployed his companies as follows :

Shallow ditches had already been dug in no man’s land and by 0330 hours on the 9th April the first waves had deployed in front of the Canadian wire ; ready for Zero Hour.

On the eve of battle, the strength of the battalion was 21 officers and 839 other ranks.