Webmatters : Memorial cross to the 15th Battalion CEF at Écurie : The location of the cross 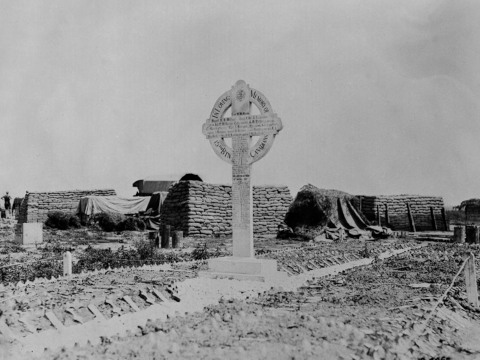 The photograph we have shows the cross near a track with a lorry there. On either side are plots which have been divided up into sections each with a marker. The photo is not clear enough to give any great detail but it can be presumed that the markers have names on them.

It is also not very clear if the plot nearest the camera also contains graves but it looks as though it might.

We can see that the cross is in its completed form as Lieutenant Munro’s name is at the top of it. His, was the last name to be added after he was killed on 1st May 1917.

None of this really helps identify the location though, or perhaps two things do. The graves are close together in long lines with the cross in the middle. How would it be possible for the graves to be destroyed by shellfire without the cross being touched ?

Secondly there are only about two dozen graves. It is hard to tell if there are additional plots from the photograph but knowing the width of the cross suggests that the (two ?) burial mounds are only one body wide. It is also possible to count the number of grave markers which would give us about twenty casualties (if the cross is indeed situated in the middle). CA 39 would have required further burials and it is odd that the photographer would not have incorporated them into his composition.

Perhaps one can also add, thirdly. What about the burials that were not 15th Battalion ? Seven of the burials at CA 39 were not 15th Battalion so would they have been placed in a separate row ? Two of those burials are from the 13th and 16th Battalions, both of which had been formed by Scottish Canadian Militia Units (Royal Highlanders of Canada and the Canadian Scottish) so it would be likely that they too would have had Celtic crosses placed over their graves. Yet in the photo there is no sign of either ordinary or Celtic crosses.

The feeling still remains though on looking at the photo ; if this is CA 39 how could the cross have survived completely intact from shell fire that smashed up the graves mere metres away.