Webmatters : Memorial cross to the 15th Battalion CEF at Écurie : The dead 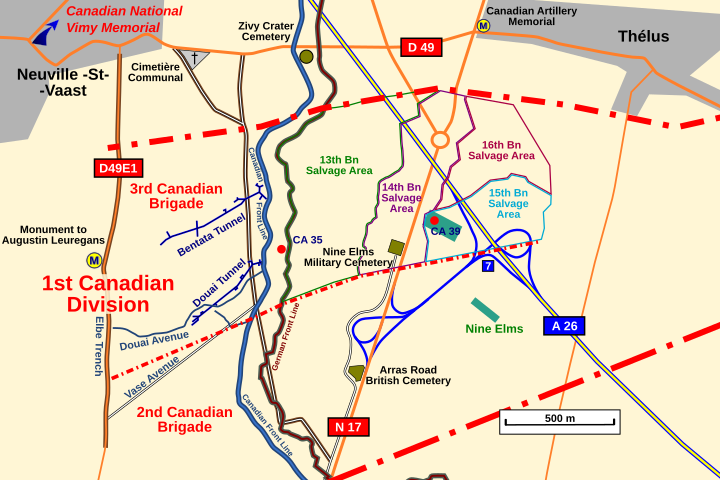 3rd Canadian Brigade’s Salvage areas
CA 35 was created by the 13th battalion, Nine Elms by the 14th Battalion and CA 39 by the 15th Battalion

In preparation for the assault, units were assigned specific locations for the collection and burial of their dead. The majority of the 15th Battalion men who fell during the attack were buried at locations coded as CA 35 and CA 39, with 23 in the former and 39 in the latter. CA 35 was located close to the exit of the Douai Tunnel while CA 39 was located close to the main Arras Road, in what is now a small wood opposite the CWGC Nine Elms Military Cemetery. 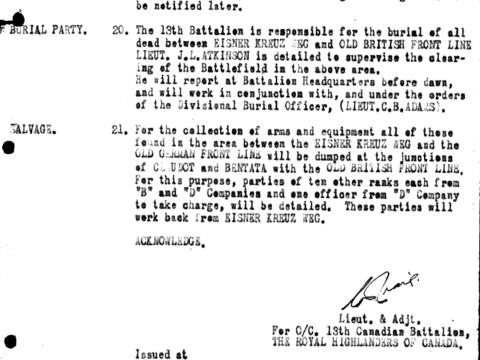 The 15th Battalion’s War Diary states that a battalion cemetery was created and the Regimental History suggests that a wooden cross was erected at CA 39. As to who created the cross, nobody knows for certain, but it is presumed that he was the battalion carpenter at that moment.

The cross is a simple affair made from wood that was to hand — basic planks — formed into a Celtic cross. A list of names was then inscribed upon it, in order of seniority.

The question then imposes, where was the cross installed ?

It might be thought that it was placed, as is suggested by the History, in the battalion cemetery at CA 39, however, this burial site was almost completely destroyed by subsequent shelling, causing the loss of most of its graves.

Further confusion can be had from the fact that the Regimental History states that by the evening of the 9th April sixty bodies had been recovered for burial.

CA 39, however, only contained thirty-nine casualties from the 15th Battalion (plus seven other soldiers from other units). Three of those were killed in late April and one (Lieutenant Munro) was buried in May.

As CA 35 was further to the rear, the battalion carpenter would have been able to work in relative safety.

The fact that CA 35 and all its graves survived the war intact and the cross is unmarked by shellfire would further suggest that the only surviving photograph is of CA 35. 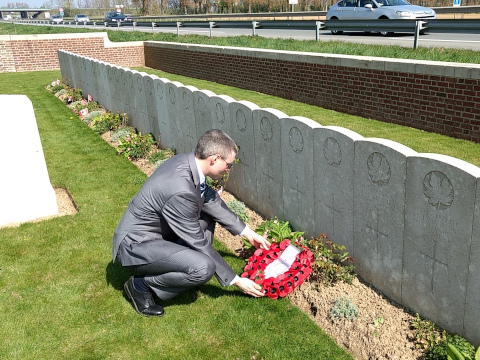 The other burials in CA 39 were lost and are now commemorated in a special memorial along the front of the cemetery. It should be noted that CA 39 was originally known as the Arras Road Cemetery ; it should not be confused with the modern Arras Road British Cemetery. 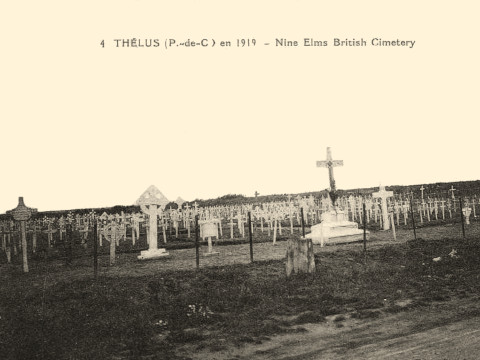 The 15th Battalion cross third from the left in the foreground. It was far from being a unique tribute.
NB. The caption British Cemetery is an error.

A 1919 French photographic postcard clearly shows that the 15th Battalion’s Vimy cross had been moved to Nine Elms Military Cemetery at the same time as the relocation of the graves.

Subsequently, between 1919 and 1923, the CWGC reconstructed Nine Elms Military Cemetery into the permanent pattern seen there today and all the wartime memorial crosses were removed. In 1923 the 48th Highlanders acquired the 15th Battalion’s Vimy cross and brought it home to the unit’s Armoury in Toronto. The cross was installed on the wall above the main parade square and unveiled in a ceremony on 30th October 1925.