Webmatters : Memorial cross to the 15th Battalion CEF at Écurie : The assault 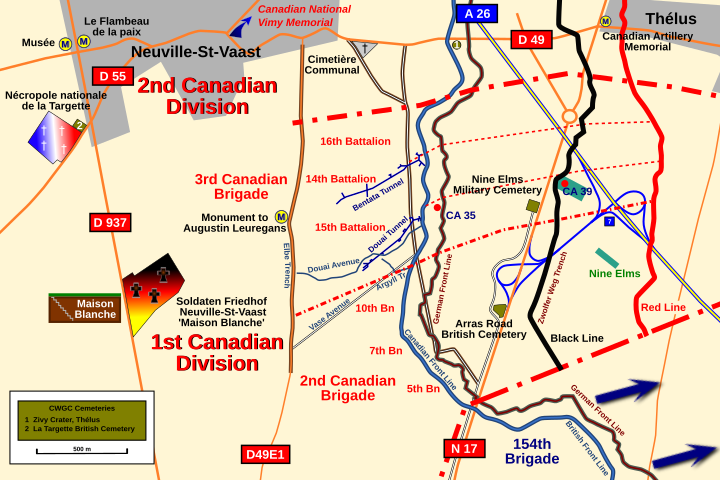 At 0530 hours the artillery barrage reached its crescendo and the first waves leapt forward. The German artillery had been silenced but there were still numerous machine guns to be dealt with. The weather was wet and turning to snow. Down the slope went the Highlanders. The first objective was the Zwolfer Weg marked as a Black Line on the maps and situated on the far side of the Arras–Lens Road.

The Chemin des Meuniers from its junction with Vase Avenue.
3rd Canadian Brigade’s front reached as far as the third bend of the track.
Vimy Ridge is in the distance but angles away from the front, thus the assault was directed off to the right of the photograph

The initial charge was carried through with comparative ease. The defenders were found to be in a state of shock and were made prisoner before having the time to react.

There was now a pause of forty minutes whilst the companies reorganised themselves.

Despite all the training, in the fog of battle, men had become separated. Nevertheless, because of their intensive training, each man knew where he was supposed to be and what his task was.

At 0655 hours the assault began its second phase, against the Swischen Stellung five hundred metres away — the Red Line, which was located in the area just behind the modern Autoroute exchange. Within five minutes it was all over, the Highlanders gathered up their prisoners and began consolidating their newly won position.

It was now the turn of the 1st Canadian Infantry Brigade to come through the 3rd and 2nd Brigades and continue the assault towards the right of Thélus, the Blue Line and the final objective on Vimy Ridge — the Brown Line.

The 1st Canadian Division’s assault was a resounding success and their memorial cross would be raised next to Bois Carré in honour of its fallen.