Webmatters : The Canadian assault on the Pimple

Reaching this area takes a little bit of effort as it is not on the main tourist route and is outside of the Canadian Memorial Park. It requires walking a fair distance along a hiking trail.

From the Canadian Memorial Park continue past the monument’s car park and start the descent into Givenchy en Gohelle. Shortly after you pass the Maple Leaf estaminet on your left you will come to a junction. Turn left into Rue Gallieni and drive to its end where you will have to leave your vehicle.

Continue on foot in the direction of the autoroute. After about 500 metres you will come to a small monument commemorating the various struggles on the hill.

Walk a little bit further and you will reach a track overlooking the autoroute and the Souchez Valley with Notre Dame de Lorette opposite. According to the season and the crops you should be able to see the Vimy memorial over the hill in the other direction. 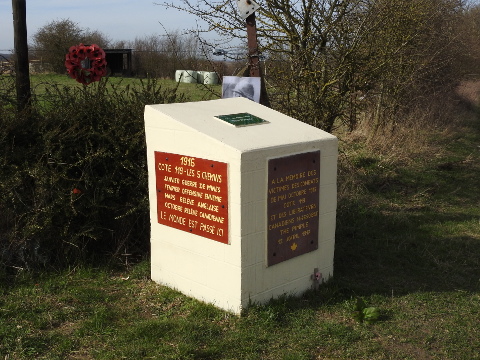 Immediately overlooking the village of Souchez and the ridge of Notre Dame de Lorette, Cote 119 was a thorn in the side of the French 10th Army’s efforts throughout 1915.

If you look at a modern map you will note that its height is recorded
as being about 125 metres and not 119.

On each occasion though the weight of German reinforcements and artillery support forced them off the summit.

The 3rd Battle of Artois on 25th September 1915 brought the French onto the western slopes of the hill where they would remain until, once more, they were pushed back off again by the Germans on 21st February 1916.

This attack by the Germans coincided with the launch of their great offensive at Verdun and was intended to throw the French into confusion as to where the real threat lay.

Ultimately the French were needed at Verdun and the British arrived to take over the entire Arras sector, which included the ridge.

The British now found themselves not only under the watchful eyes of the Germans along the entire length of the ridge, but without a proper front line system immediately in front of Souchez. This was a fairly common situation throughout the war. The Germans decided where they would defend. The Allies dug in where they had reached during the last bout of fighting whether or not it made any tactical sense. Ground won at such a high price could not be given up again lightly.

The continuous trench shown on the map does not exist. The whole ground is a quagmire, practically impossible for attack at present…

Mining operations by the Germans on Hill 119 were as ever present as that along Vimy Ridge, and there were a number of significant craters on the hill.

The reason that they are not so apparent as those within the Park is that this area has been returned to the farmers and has been tilled over. That said, near to Givenchy en Gohelle Canadian Cemetery, behind the Riding Centre you passed on the way down the hill, is an area known as the Crosbie Craters. It is private hunting ground so keep out but a sense of the ground is immediately apparent just by walking down the pathway to the cemetery.

Experiences elsewhere along the British lines had shown the need for properly trained and equipped Tunnelling Companies and this would be one of the areas in which they would be most active.

The Tunnelling Companies did not just carry out mining warfare they also provided the means to create the kilometres of passageways that would eventually bear fruit on 9th April 1917 as the Canadians took Vimy Ridge by storm.

The formation of the tunnellers

The main Canadian assault on Vimy Ridge was launched on the morning of 9th April. It was 4th Division’s task to capture Hill 145 where the Canadian Monument stands today and then move on to the Pimple the following day.

Hill 145, however, proved to be a tough nut to crack — in part because of the planning by the Canadians.

Although most of the crest was taken, it would take Major General Watson’s 4th Division until the afternoon of the 10th to clear the far side of the hill of its German defenders. Throughout that assault the advancing Canadians had been worried by machine-gun fire coming from the Pimple. 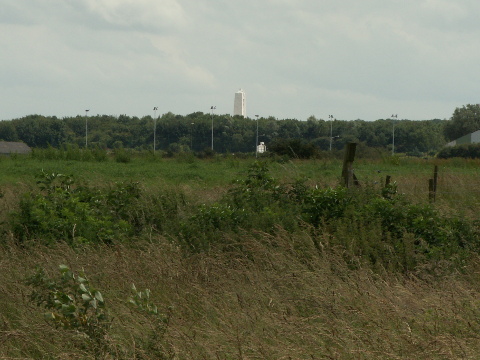 Their first task accomplished the Division could finally switch its attentions to its left flank. Snow and the dreadful state of the roads forced a twenty-four hour pause on the Canadians as they organised themselves for the attack which was to be carried out by the 10th Brigade. The brigade, in theory, would be rested having been in reserve on the 9th but the events at Hill 145 had forced its soldiers into the fray as well.

Finally, on the 12th April the Canadian 10th Brigade went into the attack at 0500 hours after a short preliminary bombardment of shell and gas against the German lines and reserve areas in the village of Givenchy en Gohelle.

Unlike the French attack on the hill, two years earlier, on a sunny May morning, this assault was carried out in the teeth of a freezing, snow swept wind. Luckily for the Canadians it was blowing from behind them.

Resistance was stubborn but the three battalions (South to north : 44th Bn, 50th Bn and 46th Bn) stuck to their accompanying barrage and despite heavy casualties, shot, bayoneted and bombed their way through the German lines. It took two hours of heavy fighting to gain their objective but, at last, the Canadians could finally rest. Vimy Ridge had fallen in its entirety.

One man in particular made his mark here and that was a sniper from the 50th Bn called Henry Norwest a French-Cree aboriginal (Métis). Born in Fort Saskatchewan on 1st May 1884 he worked as a ranch hand and rodeo performer before joining the battalion in 1915.

His natural ability to remain motionless for hours and his superb camouflaging techniques made him ideally suited to the task of Battalion Sniper. He, himself, felt that with such abilities it was his duty to undertake such a dangerous role ; often well out in front of his own trenches.

At the Pimple he dispatched so many German snipers that he won a Military Medal for his efforts.

…showing great bravery, skill and initiative in sniping the enemy after the capture of the Pimple. By his activity he saved a great number of our men’s lives.

In 1918 he would earn a bar to his medal — again for his abilities as a marksman and making himself the Battalion record holder at 115 accredited kills.

Sadly on 18th August 1918 whilst trying to take out a group of German snipers he himself was hit and killed. He is buried in the Warvillers Churchyard Extension.