Webmatters : Vimy, the rededication of the Canadian National Memorial

Rededication of the Monument by HM The Queen 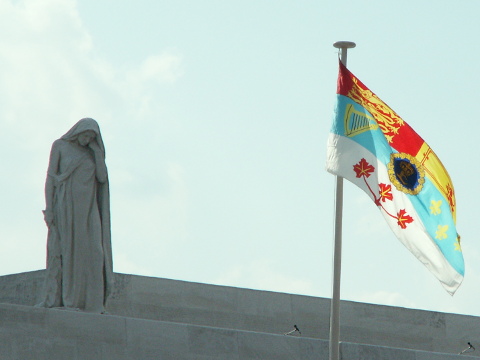 The celebrations for the 90th Anniversary of the Battle for Vimy Ridge reached their height on the afternoon of Easter Monday 2007.

In 1917 thousands of young Canadians assaulted the German lines in the midst of a snow storm whilst elsewhere in the battle of Arras, some units reported soldiers frozen to death during the night.

Ninety years later the sun came out and shone all weekend on the thousands of Canadians who had travelled across the Atlantic to pay homage to their fallen.

For nearly two years the monument had undergone renovation work costing 20 million dollars to combat the effects of time and weather and the results are clear to be seen. It sounds like a lot of money — but you wont get too many fighter planes for that price these days !

The sad state of Vimy

Although Vimy is situated in France the ground on which the memorial park is situated was gifted to Canada in 1922, thus it was the Canadians who were the hosts and the French the guests. 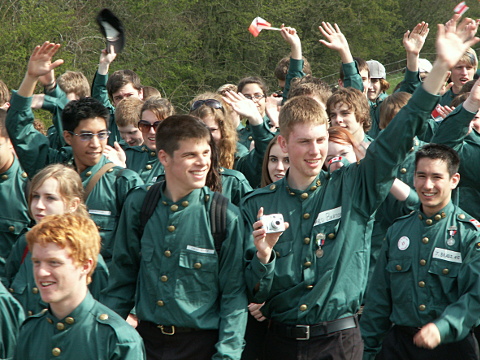 5000 young Canadians who had all paid their own way (by washing cars or nagging parents) filled the centre of the arena whilst veterans took pride of place. 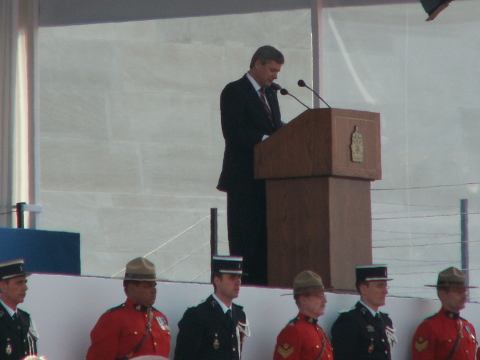 The Canadian Prime Minister, Stephen Harper, remarked that nowhere else in the world could make his people feel more Canadian. Here, they could feel the presence of their ancestors, sense the difficulties they had faced and witness the triumph they had gained.

For his part, Premier Ministre Dominique de Villepin told the crowd of some 15 to 20,000 spectators that France wished to pay tribute to the six Canadian servicemen recently killed in Afghanistan and added that France had never forgotten its debt of gratitude to Canada.

HM The Queen had arrived accompanied by HRH Prince Philip the Duke of Edinburgh to the sound of a twenty one gun salute fired by the Canadian Naval Artillery.

A guard of honour had been formed by 300 Canadian soldiers drawn from all of its Regiments and a Squadron from the 601e RCR representing the French Army.

The Canadians soldiers had been formed into four sections each representing one of the Divisions who for the first time had fought together as a Canadian Corps at Vimy in 1917. 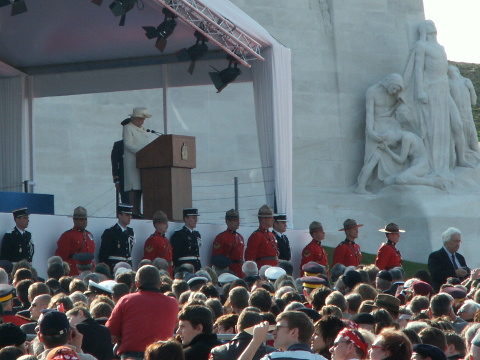 In her address Her Majesty suggested that those who wished to find the foundations of Canada’s nationhood would do well to commence at Vimy.

Speaking both in English and French she continued, that it had been by the fruit of ingenious planning but most of all the courage and determination of her soldiers that Canada had gained not only a great victory, but more than that, a place on the world stage as a nation by her own right.

Some photos from the ceremony