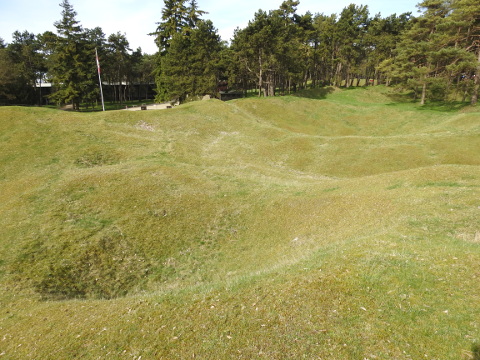 The trenches and craters of Vimy

At 0528 hours, two minutes before Zero, two hundred and thirty heavy machine guns (The Vickers machine guns as opposed to the much lighter Lewis Gun) opened fire over the heads of the Germans. A deluge of rounds fell on crossroads, back roads, signalling units, headquarters, anything within their range.

That day the machine-gunners would fire off five million rounds of ammunition !

The 863 guns and 120 mortars began their final barrage. They fired for three minutes on the Germans advanced positions and then leaped a hundred metres further forward each three minutes.

It should also be remembered that the Canadians held only a section of the front being attacked which stretched right around to the east of Arras. So it wasn’t just the Canadian guns that were firing for all they were worth.

The noise was terrifying ; even for the Canadians. After the battle, they would recall how the guns dominated all other impressions of what was going on. The heaviest thunder clap you could imagine multiplied by two and then continued incessantly.

Despite the destruction of their bunkers there were still plenty of Bavarians and Prussians capable of defending their positions and they knew that the situation was now one of desperation.