Webmatters : Monument to the 15th Bn CEF at Observatory Ridge

The monument is situated close to the junction of Zandvoordsestraat and Schachteweiderstraat a kilometre to the east of Zillebeke.

From Ieper take the Menin Road (Meenseweg N8) or Zuiderring (N37) as far as the major roundabout where these two roads meet. Follow the signs leading to the right to Zillebeke. In the centre of the town turn left and then left again onto Zandvoordseestraat.

Alternatively if coming from Heuvelland, at the Railway Crossing just to the south of Ieper on the N336/N331 follow the CWGC signs for Railway Dugouts Burial Ground (On Komenseweg parallel to the railway).

Once in Zillebeke look out for the Green CWGC for Maple Copse Cemetery which is in the same direction. The plaque is on your right at the top of the hill. The cemetery immediately left afterwards. 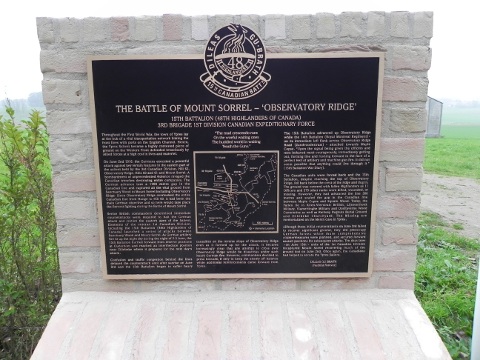 On 2nd June 1916 the Germans executed a powerful attack against key terrain features in the eastern part of the Ieper Salient held by units of the 3rd Canadian Division: Sanctuary Wood, Observatory Ridge, Armagh Wood and Mount Sorrel.

A bombardment of unprecedented violence ravaged the Canadian trenches and destroyed entire companies.

In order to halt the German advance elements of the 1st Canadian Division were ordered to launch a series of counter-attacks between Mount Sorrel and Sanctuary Wood.

That night the 15th Bn Canadian Infantry hurried forward to Zillebeke from its reserve position near Ouderdom (a large base near Reningelst 16 kilometres away). The confusion on the roads in the area of the German offensive meant that the Highlanders were unable to launch their counter-attack until after dawn on the 3rd June. By then they were already taking casualties on the reverse slope of Observatory Ridge.

Deciding that there was no alternative but to press ahead, the Battalion with the 14th Bn CEF on its left advanced up the ridge and crossed Observatory Ridge Road (Zandvoordsestraat) attacking towards Maple Copse.

The Germans immediately retaliated with overwhelming fire and forced the Canadians back behind the crest of the ridge. Over 250 Highlanders were either killed or wounded in this abortive attack.

Although these makeshift replies to the German offensive did not in themselves regain ground, they did serve to wrong-foot the enemy’s advance. On the 13th June 1916 the 1st Canadian Division went back into action and recaptured most of the lost terrain. 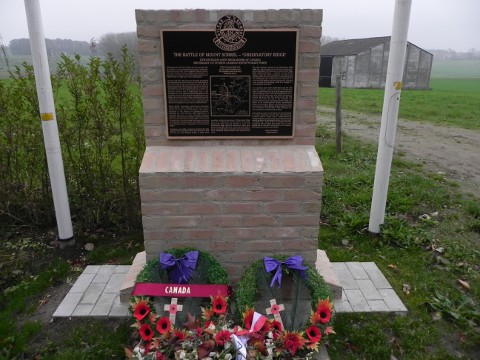 This commemorative plaque was unveiled on the 22nd October 2011 in the presence of Canadian and Belgian dignitaries by members of the 15th Battalion Memorial Project.

The 15th Bn CEF were sponsored by the 48th Highlanders of Canada a militia unit from Toronto.

The regiment has demonstrated its continuing interest in commemorating its First World War combatants by the raising of plaques across the Western Front.