This memorial plaque is situated immediately alongside the church and war memorial in the village of Haucourt in the Pas de Calais.

The village is situated about 15 km to the east of Arras along the main Cambrai Road (D 939).

Immediately after the CWGC Vis-en-Artois Memorial turn left onto the D 9 Rue du Général de Gaulle. The church is on your left. To reach the communal cemetery where the airmen are buried; continue along the road and take the next right : Rue du Maréchal Leclerc. The cemetery will be on your left. 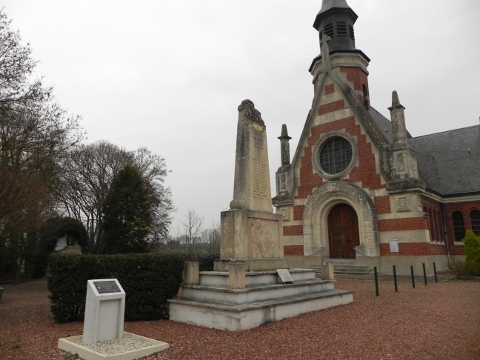 Pilot Officer Roi Saunders and his crew from 57 Squadron RAF took off from RAF Hawkinge, in Kent, on a reconnaissance mission of the German front line during the Battle of Arras.

The Squadron had previously been based on the Somme and some of the crew had made friends within the community.

In the area of Haucourt the aircraft was shot down by Flak and crashed near the junction known as the Carrefour de l’éspérance (Now the roundabout at Dury on the main D 939 towards Cambrai).

The bodies of the crew were originally buried close by but were later removed to the communal cemetery — possibly on the orders of the German administration.

The Maire of Haucourt M Philippe Dubus is an enthusiast for the local history and on visiting his local cemetery decided to try and discover the story behind the three British airmen who are interred there.

After a lot of hard work working through the CWGC and local inhabitants he was finally able to track down members of all three airmen’s families. 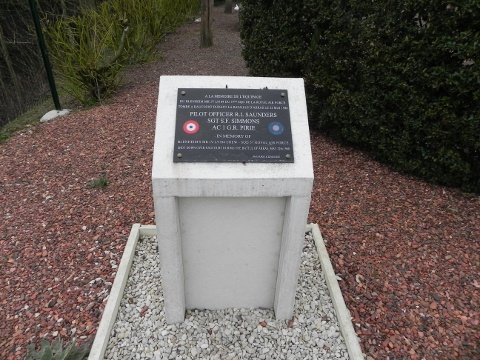 The plaque was inaugurated on the 22nd May 2010 in the presence of friends and family of the aircrew.

On its front face is the inscription :

In memory of Blenheim’s Mk IV L9184 crew 57 Squadron, Royal Air Force. Shot down over Haucourt during the Battle of Arras 22nd May 1940

All three airmen are buried in a collective grave in the village cemetery.

The other memorials in Haucourt