The Canadian memorial at Dury is easily found on the main Cambrai Road from Arras — the D 939. This road was the axis for much of the Canadian advance in 1918 towards Cambrai and there are now a number of regimental memorials in the area.

Approximately 16 km to the south-east of Arras and a few kilometres after the Vis-en-Artois Memorial to the missing you will come to a roundabout. A few hundred metres on the far side you will see the Canadian Memorial set into the trees on your left.

Turning left at the roundabout would take you into Dury village; turning right into Hendecourt which was the right flank of the Canadian advance. 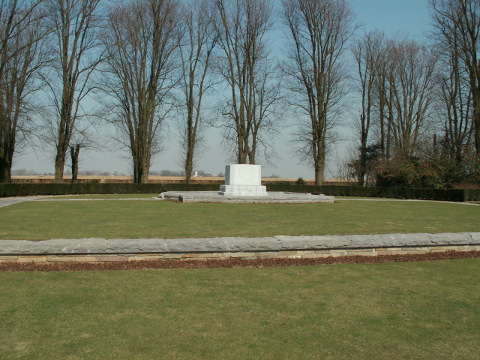 About fifteen kilometres to the east of Arras, the Drocourt-Quéant Line was a heavily fortified system of defences extended northward as a switch-line from the main Hindenburg position. Fortified with bunkers, machine gun nests and dense thickets of barbed wire the Germans hoped that it would prove impregnable.

To achieve its objective the Corps would advance astride the Arras — Cambrai Road with the 51st (Highland) Division (temporarily under Currie’s command) forming the left flank, the 3rd Canadian Division in the centre between the river Scarpe and the road and the 2nd Canadian Division on the right, south of the main road.

The Canadian advance began on 26th August 1918 and by the end of the month they were approaching this location on a wide front. 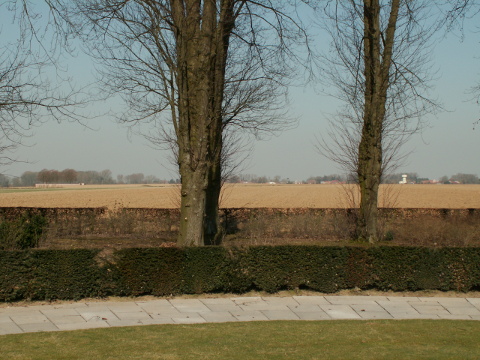 A particular problem was going to be taking Mont Dury on which the monument stands and the village of Dury itself.

The defensive system in front of the Canadian Corps was no less impressive than they had recently fought through. Concrete bunkers abounded and the fields of barbed wire in front of the first trenches were equally dense.

There was not much in the way of cover over this open farm land which had been well behind the German lines for four years and thus little touched by the ravages of war. The slope leading up to the hill was (as you may well have remarked on arriving) in clear view of the defenders and once crossed, the reverse slope would offer little respite as any attackers would be silhouetted on the skyline to the defenders in the support positions.

The initial assault down the Arras — Cambrai Road by the 12th Canadian Brigade (4th Cdn Division) went pretty much to plan. The position was, as predicted, heavily defended but they managed to achieve their first objective (marked on the maps as a Red Line) in accordance with the timetable. However, as soon as they crossed over the hill they were exposed to the full force of the German machine gun positions situated along the sunken road running between Dury village and the main road.

Despite taking heavy casualties the Brigade pushed on, supported by tanks, and by mid morning had captured the sunken road at about the same time that Dury village had fallen to the 10th Brigade. Any further advance towards the east proved, however, impossible.

On the southern side of the main road on the front of the 3rd Canadian Brigade the 13th Battalion (Royal Highlanders of Canada) passed through the Drocourt-Quéant Line before handing over the assault on the village of Cagnicourt to the 14th Battalion (Royal Montreal Regiment).

That night the Germans pulled back and the following day, 3rd September, the Canadian Corps advanced six kilometres in the face of very little opposition to reach its next obstacle: the Canal du Nord. 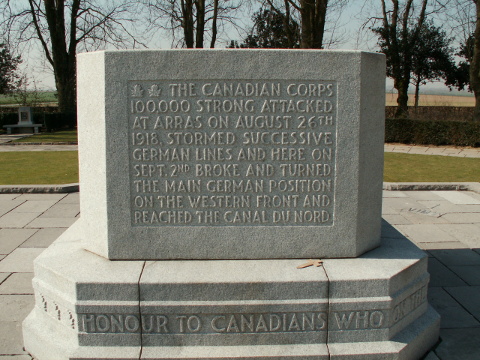 The Canadian Corps 100,000 strong attacked at Arras on August 26th 1918. Stormed successive German lines and here on September 2nd broke and turned the main German position on the Western Front and reached the Canal du Nord.