The Canadian memorial at Bourlon Wood is easily found from the main Arras—Cambrai Road, the D 939. This road was the axis for much of the Canadian advance in 1918 towards Cambrai and there are now a number of regimental memorials in the area. From the A26 Autoroute take Sortie 8 (Marquion).

Just after the church the monument is sign posted off to the left up the Avenue du bois. There is a parking area immediately in front of the memorial park.

Note that there is a school on the road. On descending the hill you will enter a one-way system that will take you around the rear of the church. Turning left will bring you back out onto the village high street. 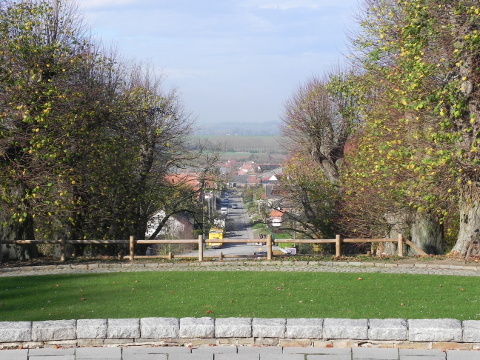 Haig outlined his desire to begin preparatory work for a full scale assault on the German’s Hindenburg Line running between Cambrai and St Quentin. To ensure that the Third Army’s left flank was secured, the First Army would take Bourlon Wood and then hold a line along the Scarpe and Escaut (Schelde) Rivers as far north as Valenciennes.

The assault on Bourlon Wood was delegated to General Sir Arthur Currie’s Canadian Corps who would have to force a passage across the Canal du Nord prior to taking the wood which sits on the highest hill in the neighbourhood.

On the extreme left the 3rd Canadian Infantry Brigade (1st Cdn Div) successfully seized the canal in a dry sector and rapidly secured the village of Sains-lès-Marquion and the town of Marquion. Through this breach in the German lines more troops poured and began widening the front.

On their right the 4th Canadian Division crossed the canal and quickly seized their first objective known as the Red Line. From here, they were leapfrogged by the 11th and 12th Brigades who immediately encountered difficulties in front of Bourlon.

To their right the 52nd British Division of Third Army had not been able to advance as quickly as the Canadians and this had left the Canadian right wing hanging in the air and exposed to enfilading fire.

Fighting its way forward the 87th Bn (11th Brigade) managed to fight its way into the southern half of Bourlon village by 0945 hours. The 54th Bn then passed through them and advanced around the northern perimeter of the wood almost reaching Fontaine Notre Dame on the far side by 1900 hours.

The plan though had been to encircle the wood and with the British held up the 102nd Bn were forced to form a defensive flank along the Bapaume Road rather than being able to advance as had been hoped.

Bourlon village fell to the 12th Brigade who continued to advance to just beyond their final objective the Blue Line. 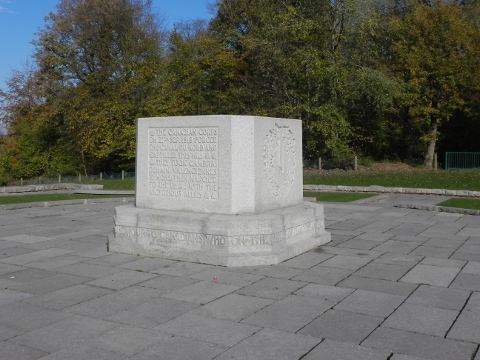 It is erected on ground donated by the Comte de Franqueville,
who was Mayor of Bourlon at that time.

The Canadian Corps on 27th September 1918 forced the Canal du Nord and captured this hill. They took Cambrai, Denain, Valenciennes and Mons; then marched to the Rhine with the victorious Allies.