Bourlon is easily found from the main Arras—Cambrai Road, the D 939. If coming from the A26 Autoroute take Sortie 8 (Marquion).

The church is easily found in the centre of the village. 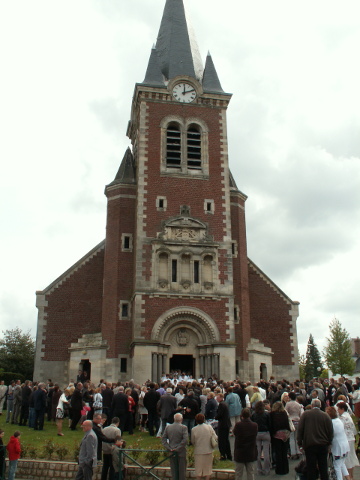 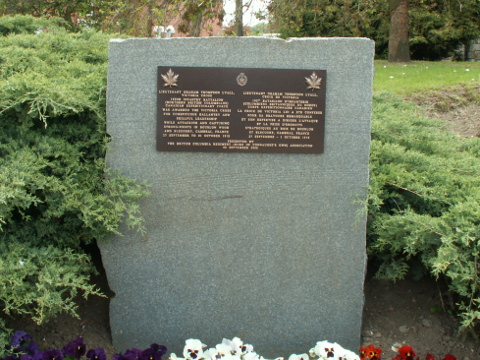 The assault on Bourlon Wood was delegated to General Sir Arthur Currie’s Canadian Corps who would have to force a passage across the Canal du Nord prior to taking the wood; which sits on the highest hill in the neighbourhood.

Currie chose to launch his assault in two phases : firstly, in front of and to the south of Sains lès Marquion, the soldiers of his 1st and 4th Divisions would cross the canal and seize Bourlon Wood — the height of which gave the Germans a major advantage in observation. Then, with the canal secured, he would widen the front with the British 11th Division on the left and the Canadian 3rd Division on the right.

The assault was scheduled for the 27th September 1918.

On the right the 4th Canadian Division crossed the canal and quickly seized their first objective known as the Red Line. From here the 11th and 12th Brigades advanced through the 10th Brigade and immediately encountered difficulties in front of Bourlon.

To the south the 52nd British Division of Third Army had not been able to advance as quickly as the Canadians and this had left the Canadian right wing hanging in the air and exposed to enfilading fire.

Fighting its way forward the 87th Bn (11th Brigade) managed to gain its way into the southern half of Bourlon village by 0945 hours. The 54th Bn then passed through them and advanced around the northern perimeter of the wood almost reaching Fontaine Notre Dame on the far side by 1900 hours.

The plan though had been to encircle the wood and with the British held up the 102nd Bn were forced to form a defensive flank along the Bapaume Road rather than being able to advance as had been hoped.

For his splendid work with the 102nd Battalion Lieutenant Graham Lyall was awarded the Victoria Cross. 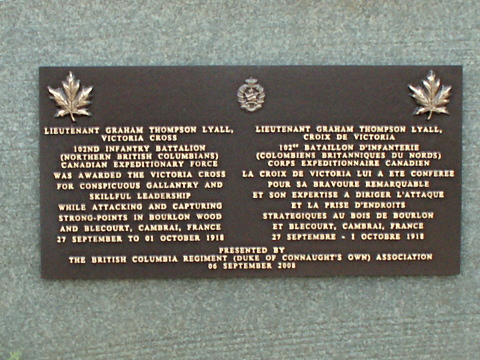 Whilst leading his platoon against Bourlon Wood he rendered invaluable support to the leading company which was held up by an enemy strong point, which Lyall captured by a flanking movement, together with thirteen prisoners, one field gun and four machine-guns. Later on, his platoon being much weakened by casualties, was held up by machine-guns at the southern end of Bourlon Wood.

Collecting those men available, Lyall led them towards another enemy strong point and springing forward alone rushed the position single-handed killing the German officer in charge and subsequently capturing forty-five prisoners and five machine-guns. Having made good his final objective with the capture of a further forty-seven prisoners, he consolidated his position and thus protected the remainder of the company.

On 1st October 1918, in the neighbourhood of Blecourt, when Lyall was in command of a weakened company, by skillful disposition he captured a strongly defended position which yielded eighty prisoners and seventeen machine-guns.

During the two days of operations, Lieutenant Lyall captured in all three officers, 182 other ranks, twenty-six machine-guns, and one field gun, exclusive of heavy casualties inflicted. He showed throughout the utmost valour and high powers of command.

The plaque was presented by the British Columbia Regiment (Duke of Connaught’s Own) Association on the 6th September 2008.

The other memorials in this area