The story of Écourt St Quentin forms the background of a fascinating book by the Canadian writer Michel Gravel : Nous sommes français ! 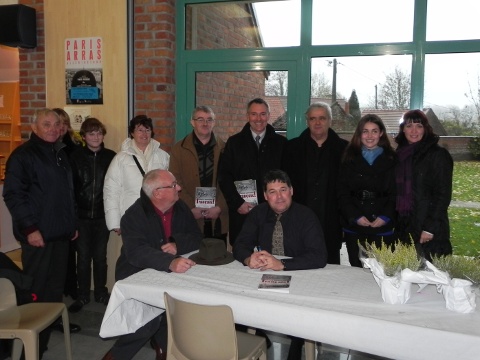 When war broke out in 1914 this fairly prosperous village had a population of more than 1,800 inhabitants. On the outbreak of war all the eligible men were soon called up for military service and those males that were left behind and who could prove useful to the German war effort were deported. By September 1918 the population had been reduced to just 300 women, children and the elderly. 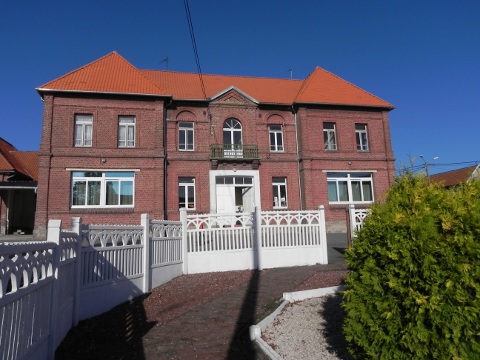 Still the school, but the Mairie has moved up the road

In September 1914 squadrons of Uhlans arrived in the village, the Mairie (Town Hall) and adjoining school was turned into a German command centre and the church would become a hospital. For almost exactly four years the village would become an important part of the German’s logistical zone well behind the Arras front line and away from the front.

In a fashion, life went on as normal for the villagers, but the reality was that they were little more than slaves for the German war machine.

On 12th March 1918 this state of semi tranquillity was disturbed by a British bombardment on the German rear areas. The church was severely damaged and a number of the wounded lying in their beds were killed by the collapsing roof.

Just over a fortnight later the Germans would launch the first of their great spring offensives to win the war. Those offensives would eventually prove counter-productive as their soldiers suffered terrible losses and wore themselves to the point of exhaustion.

Having pushed the Allies back the tide was turned on the 18th July by the launching of a French counter offensive at Soissons followed on the 8th August by that of the British at Amiens. Those weeks of August were consumed in taking back territory won by the Germans, but as September approached the Allies launched themselves into unknown territory.

The Canadian Corps had finished its part in the Battle of Amiens on the Somme and having been relieved by the French headed back to Artois for the advance on Cambrai, launched on the 26th August 1918.

The initial steps were back across the Arras battlefield; Monchy le Preux, scene of a heroic stand by the Royal Newfoundland Regiment in April 1917, fell to the 3rd Canadian Division.

Newfoundland is England’s oldest colony. It would not become part of Canada until 1949. The tiny population maintained a battalion of soldiers throughout the war and their regiment would be the only one during the war to be honoured by King George V with the addition of Royal to its name.

The Canadians, flanked by British Divisions, advanced astride the Arras – Cambrai Road. Having broken through the Hindenburg Line they were then faced with the Germans’ secondary position known as the Drocourt-Quéant Line. This was broken on the 2nd September.

The loss of the villages of Dury and Cagnicourt placed the Germans at Écourt in a difficult position and it was decided that a retirement would be necessary. (A retreat is something that only the enemy ever carry out. The party ordering the said ‘going backwards’ always retire !)

The citizens of the villages under German occupation were of course also suffering the Allied bombardment (which included gas shells). As they pulled their units back, the German Command ordered that the inhabitants would have to go with them, for their own safety (which was in some ways the truth of the matter).

The Écourtois (as the villagers are called) were told that transport would be made available but that they should leave with hand luggage only (Evidently this was a budget flight).

This put everybody into a quandary; should they leave or not. British prisoners passing to the rear let it be known that their regiments were not far away. Liberation was at hand – but would it be safe to stay as the battle passed through the village.

Ultimately most of the villagers were rounded up and transported away (something that was happening to all the villages along the new battlefront). 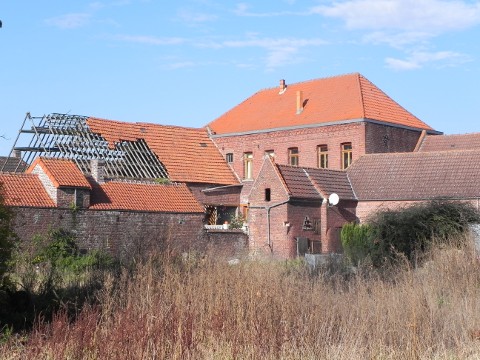 Forty-five though decided to stay behind and brave it out in the cellars of Ernest Léchevin’s farm; a well constructed ensemble with solid walls. On leaving them behind the German officer told them that they would all be killed: the English would never arrive. And he was right; the soldiers to arrive were Canadian.

On the morning of the 3rd September the Canadians and British continued to press the Germans back. The ground over which they were advancing had escaped the worst ravages of the war and the Germans were more intent on retiring to their next line of defence (The Canal du Nord at Marquion) than trying to slow the Allies down.

Although numerous villages had been taken these had either been reduced to ruins by years of continual combat or, like Écourt, been evacuated.

Écourt was in the path of the Canadian 87th Battalion and although they were not being given any great trouble by the German Infantry the same could not be said for their artillery which was now pounding their former quarters. One of the victims of the German shelling was Lieutenant Albert Lloyd who was killed as he entered the village. 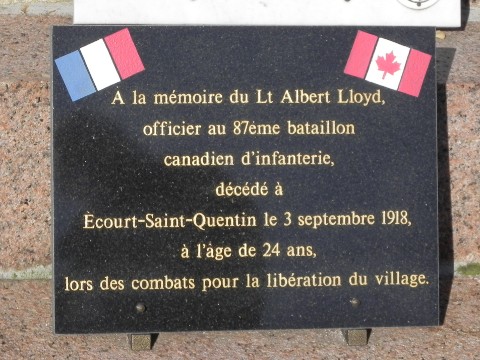 The plaque to Albert Lloyd on the village war memorial.

By 1220 hours Écourt had been taken and the Canadians began sweeping through the buildings to ferret out any enemy that had hidden themselves.

Whilst this was going on some of the villagers were popping above ground now and then to see what was going on; a risky thing to do considering that soldiers would shoot at anyone that they didn’t recognise.

On his final excursion out of his cellar Ernest Léchevin realised that he could understand some of the soldiers: Québecois amongst the 87th Battalion. Écourt had been liberated.

“Nous sommes français !” : After four years of occupation, the liberation of the people of northern France had truly begun.

The villagers were transported back to Arras and immediately became the subject of photographs and newsreel footage, they were on the front page of all the papers. And then, just as quickly, they were forgotten. The war would soon be over and this historic moment was consigned to dusty shelves, kept alive solely within the local community. 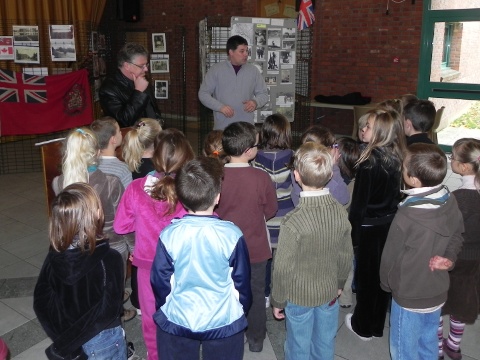 Michel Gravel talking to the junior members of the village

The above account is but a summary of this fascinating book.

Written in a conversational style, Michel Gravel takes us on an investigator’s journey as he examines the evidence for the Canadians’ suggestion that they had liberated the first French inhabitants in occupied France.

Michel Gravel leaves no stone unturned in the search for information about the personages and locations encountered in the story.

The pages are filled with photographs from all periods from pre-war to modern day and a selection of maps clearly explain the various stages of the Canadians’ advance out of Arras.

This is not a dry historical thesis, it is a very personal journal of years of research, friends made and stories uncovered.

Written in French, anybody with an elementary grasp of that language should be able to enjoy the story.