Marquion is a village on the main Arras to Cambrai road (D939), about 25 km from Arras. Immediately after the shopping centre at Barralle you descend in to Marquion. (Note that this is all 50 kph.).

The monument is located immediately alongside Écluse No 2 (The lock on the canal) which is signposted, to the right, immediately after the bridge.

From the A 26 Autoroute take Sortie 8 (Marquion) and then as you would also do coming from Cambrai follow the signs for Marquion and Arras. Having traversed the town you will see the bridge and the lock will be on your left.

The silo at the port of Marquion on the far side of the bridge makes an excellent point of reference on the surrounding landscape.

The port deals with over 200,000 tonnes of produce every year.

Once the front around Amiens had been secured in August 1918 Sir Douglas Haig directed the First Army to strike eastward out of Arras. For its part in the coming offensive the Canadian Corps was given the task of forcing the Drocourt-Quéant Line (The Canadians call it the D-Q Line) south of the Scarpe and advancing to the line of the Canal du Nord.

Currie chose to launch his assault in two phases : firstly, in front of and to the south of Sains lès Marquion, the soldiers of his 1st and 4th Divisions would cross the canal and seize Bourlon Wood — the height of which gave the Germans a major advantage in observation.

The Canal du Nord would remain unfinished for decades and was only finally completed in the sixties. Écluse No 2 here at Marquion was only completed in 1964 — thus it would not have been here at the time of the battle. 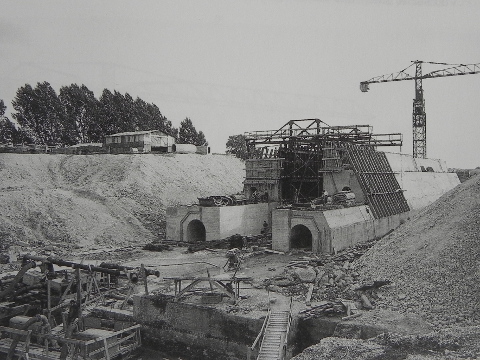 Once the 14th Battalion had taken the lock and village of Sains lès Marquion the 13th Battalion still in the dry zone leap-frogged the 14th Battalion and turning north continued on towards the town of Marquion. They were held up however by a machine gun emplacement near the Chapel just to the south of the town.

The Highlanders of the 15th Battalion began their own advance towards the canal at 0845 hours. In theory the Engineers were supposed to have built bridges across the canal but the machine gun nests on the far banks and in Keith Wood had seriously hindered their ability to work.

Thankfully the sappers had managed to get one bridge thrown across and the Battalion’s scouts had managed to construct a makeshift bridge of planks across the Agache River (actually little more than a stream).

The Companies filtered across the canal and began neutralising the machine guns between the canal and the road between Inchy and Marquion. From there they spread out taking different routes northwards towards Marquion. In the town the Germans put up a fight and a hard struggle began for the streets and houses.

By 1330 hours the attack was behind schedule (the covering bombardment had gone through Marquion at 1045 hours) so the Highlanders had to continue on to Sauchy without artillery support.

During the day the 15th Battalion had captured three hundred prisoners, but the cost had been 33 killed, 12 died of wounds and 108 wounded.

The majority of those who died in combat are buried in either Sains Les Marquion British Cemetery (20) or in Quarry Cemetery in Marquion (10).

This project was made possible by the active cooperation of Voies navigables de France. 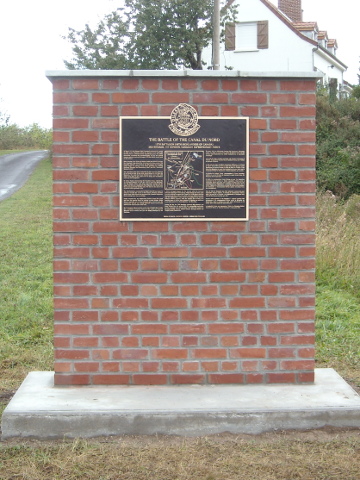 This commemorative plaque was unveiled on the 24th September 2012 in the presence of Canadian and French dignitaries by members of the 15th Battalion Memorial Project.

The plaque carries a bilingual account and detailed map of the action.

In 2013 the first Highlanders’ Trophy Race was organised as part of the Fête de l’eau organised by the Club Nautique de l’Agache. This fun event is intended to help raise awareness of the events of 1918.

On a windy evening members of the 15th Battalion Memorial Project were joined by local townspeople led by Julien Olivier the Maire of Marquion and Alain Lebek the Director for the Cambrai Sub-Division of the VnF.

Music for the occasion was provided by the Harmonie de Marquion. Yves Holbecq and Guy Godet La Loi from the Somme Battlefield Pipe Band provided the traditional Canadian bugle calls and the lament.

Just as the event was about to start the rain began to pour in torrents and it was decided that the speeches would be left for the reception. Thankfully the downpour only lasted for fifteen minutes and the majority of the ceremony passed off in calmer weather.

The monument was draped with an old-style Canadian flag that had been carried by the grandfather of Captain Steve Gilbert during the battle of the Somme in 1916. It was under this flag that members of the CEF joined and fought.

The ceremony was brought to a close by a lament and the two national anthems during which Victor Danel a young member of the local rowing club raised the Canadian flag in the middle of the canal.

In the Salle des Fêtes at Marquion M Olivier and Lt Colonel Marcel Cloutier, the Canadian Deputy Military Attaché spoke of the need to honour those who fell in previous conflicts whilst remembering members of our defence forces who continue to serve across the globe today.

Our thanks to M Stéphane Danel of Sains-lès-Marquion for the majority of these photographs.