The Royal Montreal Regiment at the Canal du Nord

On 2nd September the 14th Battalion (Royal Montreal Regiment) captured the village of Cagnicourt roughly half way between Arras and Cambrai. They then moved to a position to the north of Inchy and directly in front of the Canal du Nord with the village of Sains lès Marquion on the far side.

The 14th Battalion were part of the 3rd (Canadian Highland) Brigade along with three other battalions:

Soldiers of the 14th Battalion were easily spotted amongst their brigade comrades because they were the only unit of the four that did not wear kilts.

It is possible to retrace the general direction of the attack quite easily on foot. The total distance being approximately 3 kilometres.

Park in the village near to the church and war memorial. From there walk the short distance out to Écluse No 3 (Lock 3). The lock is not signposted as such but its private roadway is easily found on the right.

In 1918 the Canal du Nord had not yet been fully completed so the canal to your right (north) was filled with water but to your left was still under construction and completely dry. The Inchy bridge which you can see was lying ruined within the canal. 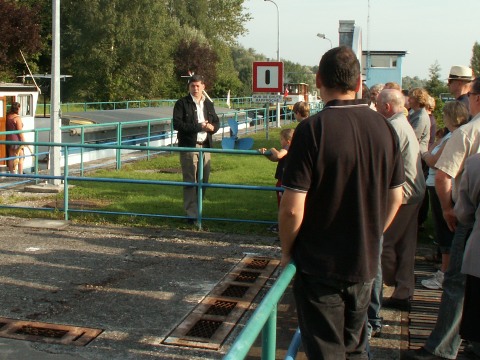 On the far side of the Canal the Germans had a number of advanced positions and barbed wire had been strung out in the streams running along the canal edge.

The trees in front of you are those of Paviland Wood. The 14th Battalion were guided into place by the 16th Bn and formed up in the wood during the early hours of the 27th September.

They could count themselves lucky in that their area of responsibility was between the lock and the bridge — so all of it was dry. The 15th Bn had drawn the short straw of getting wet as they attacked across the canal towards Marquion. Covering the right flank on the far side of Inchy Bridge was the 4th Battalion CEF of 1st Brigade.

The reason that this small section of the assault on the Canal du Nord was so remarkable is the way in which it had been decided to take the village which was known to be heavily fortified.

Rather than try and cross the canal and take the village by direct assault it was decided to take a leaf from the German’s own book of tactics and simply by-pass it. Once the two lines of defence works on the village side of the river had been secured and flank guards had been positioned, part of the 14th Battalion would turn around and take the village from behind.

This meant that the artillery supporting the attack had to be finely co-ordinated with the infantry attack. Timing would be everything in an era without modern telecommunications.

By this stage of the war both sides used a rolling barrage. The infantry could only advance against machine guns with the aid of a wall of steel that advanced just in front of them. The artillery timetable told the gunners where they were supposed to be firing throughout the attack. Every few minutes the gunners would raise their sights slightly sending the shells a little bit further and allowing the infantry to advance another 100 metres.

What was being asked here though was for the artillery to move the men forwards and then bring the barrage backwards onto the village. That meant that the initial attack over the canal had to run like clockwork. The 14th Battalion had to be in exact positions as the shelling started its reverse path.

Such an attack had never been attempted before and some voices at Headquarters raised doubts about the 14th Battalion’s ability to carry out the manoeuvre. However Lt General Arthur Currie in command of the Canadian Corps expressed his opinion that his infantry and gunners were up to the task.

Cross the lock by the bridge to the grassy bank on the far side and walk along a short distance to the left towards Inchy bridge. You will see that even today it is a tangle of bushes and trees as well as being a long sudden drop.

On the night of the 26th September 1918, 50 000 men were massed in the rear area in readiness for the following day’s assault on the canal. The 14th Battalion moved up to their jumping off positions in Paviland Wood and at 0520 hours the British and Canadian artillery commenced their bombardment and the attack began.

The first problem for the 14th Battalion was a section of open territory between the wood and the canal. German machine guns opened up on them and the Canadians found the Agache stream filled with barbed wire. For a moment it looked as though the attack would be held up but Captain Ben Jackson rushed forward into the waist deep stream and waded across. Leading his scouting party forward they silenced the machine guns and the attack moved on.

If you look through the bushes down to your right about 100 metres from the lock you will see the Agache as it is directed alongside the canal. It may not look much but add barbed wire, machine guns and the muddy slope that has to be clambered up and it becomes quite a difficult obstacle.

The 13th Bn who were following on behind found the going through
the streams even harder in their kilts !

As the battalion reached the bank of the canal, machine guns from the lock opened up on them. The plan had been to have scaling ladders to climb the eastern wall of the canal (remembering that it was a dry ditch) but these had not arrived in time and the men were forced to make the best of it.

Cross back over the lock and take a moment to look over the northern side which was full of water.

A detachment under Lt Henry Campbell rushed the lock and threw machine guns and gunners over the side into the canal before dispatching those on the far bank with similar alacrity. 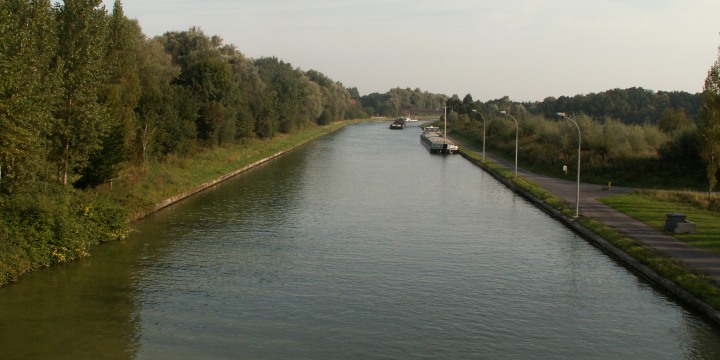 Walk a short distance down the eastern bank. You will notice a farm track coming in from the left that seems to run directly into the wall of the canal. In 1918 this track actually crossed through the building works on the canal and it was through here that four Mk IV Tanks of 7th Bn Tank Corps (All tanks were British units) crossed through the canal in support of 3rd Canadian Brigade.

The storming of the canal was going to plan with many of the battalion displaying great courage and discipline but now came the all important moment of truth. 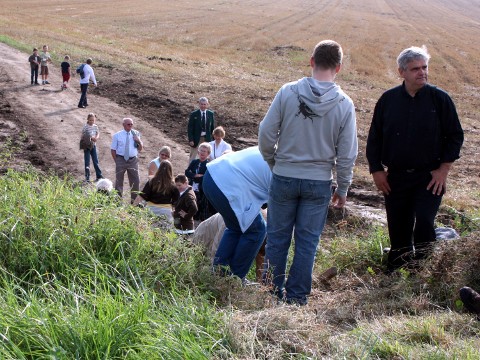 Descending the embankment — we had a ladder !

If you are feeling adventurous descend the bank to the track or walk back to the lock and out onto the main road. Turn right and you will soon join the top end of the track.

Continue along the road as it sweeps around the village until you reach a crossroads with the British cemetery (on your right) and a calvaire (on your left). This calvaire was present in 1918 and represented the point at which the 14th Battalion had to turn back on themselves and take the village.

At 0724 hours that morning 1st Company paused for a few moments waiting on the barrage to change direction. It did so exactly to time and the Canadians advanced into the village catching the German defenders by surprise. With the battle raging around them the Germans had not realised that the Canadians had already managed to cross the canal and were now attacking them from all sides. 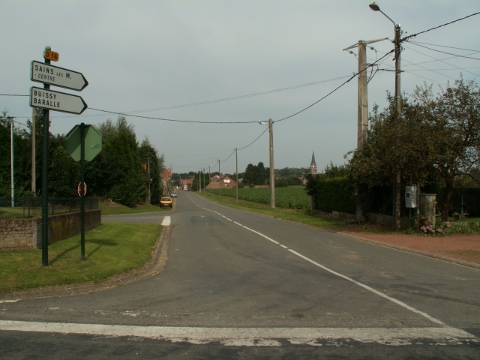 Looking towards the village from the British Cemetery

Leading the attack on the village was Lt Tuttle who was soon wounded by machine gun fire. He refused to go to the rear and instead climbed aboard one of the tanks and directed his men from there.

Although initially met by heavy machine gun fire the Germans lost heart and 350 prisoners were rounded up as the shattered remains of the village finally came into the hands of the 14th Battalion at 0830 hours.

By the standards of the First World War the casualties were quite light with the 14th Battalion suffering 200 men killed and wounded. The cemetery was created in the aftermath of the battle and contains many of their thirty four dead.

Take a moment to walk amongst the 255 gravestones from this and the tank battle of 1917 (when the village had been one of the never reached British objectives).

From the cemetery it is a short walk back into the village following in the footsteps of Lt Tuttle and his tank.

It commemorates the exploits of the Royal Montreal Regiment and the friendship that has sprung up between them and the village.

For a far more in depth account of the Royal Montreal Regiment’s exploits during the war I would thoroughly recommend Michel Gravel’s book : Tough as Nails, which is available from CEF Books.