Cagnicourt is a village 18 km south-east of Arras. The easiest way to get there is to follow the main Arras — Cambrai road (D939) until just after a large roundabout followed immediately afterwards by the Canadian Memorial at Dury (On the left). On descending the hill you turn right at the junction onto the D13.

Continue through Villers-lès-Cagnicourt and follow the road past the communal cemetery (under which the Germans built a field hospital) and then the Cagnicourt British Cemetery.

Just before the church there is a small parking area on your right and the monument will be on the grass in front of you. 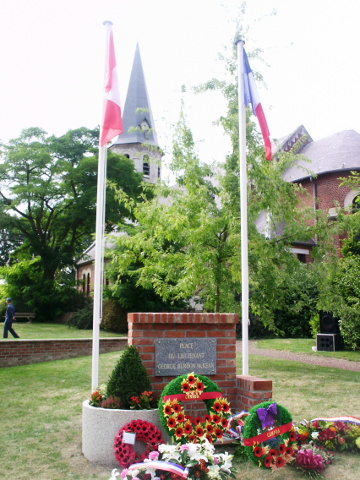 Just before 0800 hours on the 2nd September 1918 a scouting party from the 14th Battalion Canadian Infantry (Royal Montreal Regiment) approached the village of Cagnicourt to the east of Arras.

They were part of the Canadian assault on the Drocourt-Quéant Line which ran a short distance to the west of the village.

The advance had left most of them killed or wounded and on reaching the outskirts of the village only Lieutenant George McKean VC and two of his men remained. McKean himself had been hit by a piece of shrapnel in his right leg but continued his way forward.

Over a hundred Germans garrisoned the village, and whilst the allied bombardments had reduced it to a shell there remained plenty of hiding places for machine guns and snipers to put up a stout resistance to the approaching Canadians.

Realising his predicament, and much to the surprise of the waiting Germans, McKean started shouting orders to units either side of him, encouraging them to move in on the enemy. Thinking themselves outflanked and out manoeuvred the Germans surrendered to McKean and his two compatriots.

In reality McKean’s nearest support was still a number of minutes away and in effect the three men took the village and its garrison of about 150 by themselves.

For his ingenuity McKean received the Military Cross adding it to his previously awarded Victoria Cross.

He survived the war but was killed in November 1926 in a saw-mill accident at his home in Brighton, England.

My thanks to Michel Gravel for advising me of the ceremony and providing the details of the events. Without his enthusiasm and research the monument would not exist.

The Place immediately in front of the village church was renamed in honour of Lt McKean VC MM on 6th September 2003.

For a far more in depth account of the Royal Montreal Regiment’s exploits during the war I would thoroughly recommend Michel Gravel’s book : Tough as Nails, which is available from CEF Books.