Sains lès Marquion is a small village of some 300 inhabitants slightly to the south of the main Arras Cambrai Road (D 939). Coming from Arras, continue towards Cambrai, passing the Vis en Artois Memorial and the Canadian Monument at Dury. You will then reach the town of Marquion where you will turn right onto the D15 following the signs for Sains lès Marquion.

On reaching the British Cemetery at Sains lès Marquion turn right again towards the village centre.

Once again I am indebted to Michel Gravel for letting me know about this event which took place on 31st August 2008.

In March 1918 the Germans had played their last cards with their great Spring Offensive – the Kaiser’s Battle. Their storm troopers smashed their way through the British and later French defensive systems recovering huge amounts of territory that had cost the Allies dear.

The old battlefields of the Somme in 1916 and the Chemin des Dames in 1917 were back in German hands within days and not the months that it had taken to win them. But, the tide had turned. The British and French had been flung back, their lines had been buckled but not broken.

On 18th July 1918 the French launched their counter-offensive at Soissons and this was followed on 8th August 1918 with Field Marshal Haig launching the British in a counter attack to secure the city of Amiens. The soldiers under his command would not have realised at the time but they had begun the final advance, the advance to victory.

The Canadian Corps returned to Arras as part of the British First Army and began the drive towards Cambrai.

On 2nd September the 14th Battalion (Royal Montreal Regiment) captured the village of Cagnicourt roughly half way between Arras and Cambrai. They then moved to a position to the north of Inchy and directly in front of the Canal du Nord with the village of Sains lès Marquion on the far side.

The 14th Battalion were part of the 3rd (Canadian Highland) Brigade along with three other battalions:

Soldiers of the 14th Battalion were easily spotted amongst their brigade comrades because they were the only unit of the four that did not wear kilts.

One young soldier amongst the hundreds in the Royal Montreal Regiment was Private Zotique Reid. On 31st August 2008 his great-nephew, author and historian, Michel Gravel returned to France to commemorate the Battalion’s successful storming of the canal and the capture of this small village by means of an audacious battle plan.

Michel’s research into the Battalion’s exploits resulted in the publication of a book (Tough as Nails / D’Arras à Cambrai par le chemin le plus long), which in turn has given him further interest in the Canadian advance.

To commemorate the success of their attack and the liberation of his village from four years of occupation by German troops the local Maire: M Guy de Saint-Aubert organised a short programme of events. 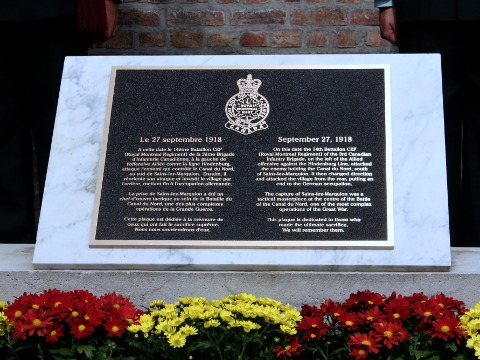 The plaque was unveiled on the 31st August 2008 in the presence of Lt Colonel C Robinson and his Regimental Sergeant Major, CWO G Furholter from the Royal Montreal Regiment.

The day started with a guided tour conducted by Michel Gravel along the canal and into the village following the route of attack made by the RMR on the 27th September 1918.

It was remarked by many of the villagers who participated in the walk that it had taken a Canadian writer to come over and explain the events leading up to the liberation of their village.

A more detailed description of the battle for the village plus a rough map guiding you around this three kilometre walk can be found on the following page :

Following this very informative promenade we were invited to attend the unveiling of the plaque which had been presented by the RMR to the village. Music was provided by the Harmonie de Marquion and the speeches were led by M de Saint-Aubert for the village and M Julien Olivier the Maire of Marquion and Councillor for the Canton of which the village is a part.

A wee group of local children came forward and with a roll of the drum unveiled the plaque which details the taking of the village.

During the traditional verre d’amitié the Canadian party were kept busy signing copies of Michel’s book whilst the villagers conversed at great length about the local cemetery, what the names meant, why did some of them have a sphinx and Egypt marked on them ? Many thought it was to do with Colonial Units and were surprised to find that in fact it was to do with battles against Napoleon during his Egyptian campaign.

One of the graves in the cemetery is that of Private Jim Young of the 7th Bn CEF (1st British Columbia Regiment). They were some of the follow through troops that day on their way towards Bourlon Wood. As most of his fallen comrades are buried near Bourlon it would appear that he had been killed at the very start of the battle. His great-nephew Jim Vallance was present and it was felt that this added a personal aspect to the day.

As our host remarked: it is easy to become blasé about the cemetery. It was something that the villagers passed every day without really giving it much attention. But once you met the relatives of your liberators the graves took on a human perspective.

Next it was the turn of the Michel’s party to be surprised — by the number of shells still being gathered up around the area. Whilst the number has diminished over the years there was still a good sized pile waiting to be collected.

During the meal which followed, Colonel Robinson and RSM Furholter presented the village with a regimental flag and plaque expressing the desire that they should be displayed appropriately at village events.

In his short reply M de Saint-Aubert assured the Regiment that the flag would be flown and that their sacrifice of ninety years ago would be remembered by the community.