Webmatters : The Battle of the Canal du Nord September 1918

The 48th Highlanders of Canada

The 15th Battalion Canadian Infantry were part of the 3rd (Canadian Highland) Brigade along with three other battalions:

On the 27th September 1918 the Canadian Corps under its commander Sir Arthur Currie launched its assault on the Canal du Nord immediately to the south of Marquion.

Currie chose to launch his assault in two phases : firstly, in front of and to the south of Sains lès Marquion, the soldiers of his 1st and 4th Divisions would cross the canal and seize Bourlon Wood — the height of which gave the Germans a major advantage in observation.

The 14th Bn Canadian Infantry (Royal Montreal Regiment) seized the lock at Sains lès Marquion and continued on past the village. Then in a very complicated manoeuvre the artillery bombardment turned back on itself sweeping over the defenders from the rear.

At this stage the 13th Battalion still in the dry zone leap-frogged the RMR and turning north continued towards the town of Marquion. They were held up however by a machine gun emplacement near the Chapel just to the south of the town.

The Highlanders of the 15th Battalion began their own advance towards the canal at 0845 hours. In theory the Engineers were supposed to have built bridges across the canal but the machine gun nests on the far banks and in Keith Wood had seriously hindered their ability to work. 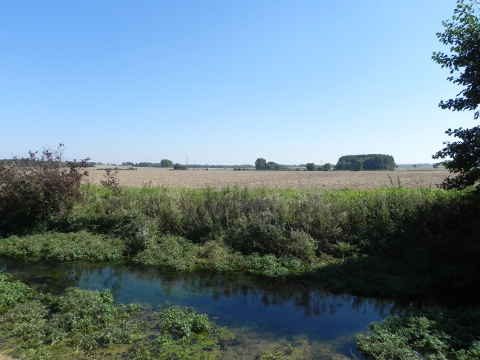 Thankfully the sappers had managed to get one bridge thrown across and the Battalion’s scouts under Captain Gordon Winnifrith were able to construct a makeshift bridge of planks across the Agache River (actually little more than a stream).

John Banton who served with the Highlanders drew a number of sketches throughout his service.

The Companies filtered across the canal and began neutralising the machine guns between the canal and the road between Inchy and Marquion.

By now it was clear that the 13th Battalion were held up at the Chapel and the enemy machine gunners were sweeping the entire zone between the canal and Keith Wood.

The 15th Battalion’s companies spread out taking different routes northwards along the side of the canal. No 1 Company remained in contact with the Marquion Line taking the defenders in the flank.

No 3 Company advanced by a route just to the west of Keith Wood whilst even closer to the canal, No 2 Company entered Marquion on its western side near the destroyed bridge. The task of reserve and mopping up fell to the No 4 Company.

The track running north from Sains lès Marquion
The main road is just to the right of the copse — Keith Wood.

In the town the Germans were ready to put up a fight and a hard struggle began for the streets and houses. It was also at about this moment that Major Girvan with No 4 Company found himself attacked from the rear by a group of about fifty Germans who had managed to remain undetected.

Fighting back to back the Highlanders managed to beat off this counter-attack and captured the surviving Germans. This incident all but put an end to the resistance south of Marquion because with the town now in Canadian hands the Germans were forced to pull back.

By 1330 hours the Highlanders were behind schedule (the covering bombardment had gone through Marquion at 1045 hours) so they had to continue on to Sauchy without artillery support. However, with the applied fire of their own machine guns thirty minutes or so was enough to see them on the final objective – the Blue Line. 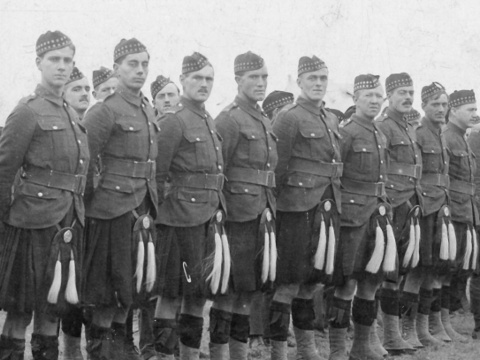 Private John Girvan in Canada – fifth from the left

Major Girvan (who had risen from the ranks) would be awarded the DSO for his actions during the battle.

For marked gallantry and ability in the attack on the Canal du Nord on 27th September, 1918. Crossing the canal on light bridges, and the River Agache by planks, under heavy machine-gun and sniping fire, he pushed on. He personally attacked and captured an enemy machine gun, shooting the gunner and turning the gun on the enemy. He went on and assisted in capturing Chapel Corner and the village of Marquion, and then gained his final objectives. His courage and dash were a fine example to his command. 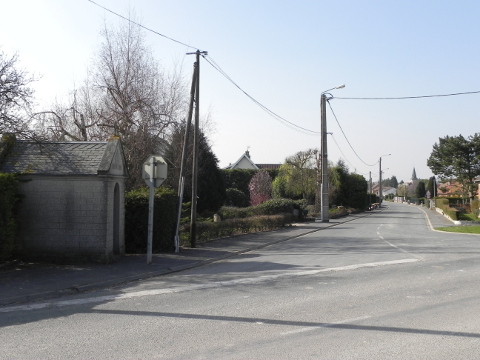 The chapel at Marquion is opposite the junction for Quarry Cemetery

During the day the 15th Battalion had captured three hundred prisoners, but the cost had been 33 killed, 12 died of wounds and 108 wounded. Amongst the dead was Captain Winnifrith who had been a stalwart of the battalion for so long.

The majority of those who died in combat are buried in either Sains Les Marquion British Cemetery (20) or in Quarry Cemetery in Marquion (10).