The Crows Nest monument can be reached by a number of routes but from Arras the easiest is probably to the main Cambrai Road from Arras — the D 939. This road was the axis for much of the Canadian advance in 1918 towards Cambrai and there are now a number of regimental memorials in the area.

Approximately 16 km to the south-east of Arras and a few kilometres after the Vis-en-Artois Memorial to the missing you will come to a roundabout.

A few hundred metres on the far side of the roundabout is the Canadian Memorial at Dury Hill.

Turn right following the sign for Hendecourt. As you approach the village you will see a wooded hillock on your left — The Crows Nest — and Upton Wood Cemetery on your right.

The monument is just inside a gateway into a field on your left.

Once the front around Amiens had been secured in August 1918 Sir Douglas Haig directed the First Army to strike eastward out of Arras. For its part in the coming offensive the Canadian Corps was given the task of forcing the Drocourt-Quéant Line (The Canadians call it the D-Q Line) south of the Scarpe and advancing to the line of the Canal du Nord.

The Canadian advance began on 26th August 1918. The 2nd Division on the right of the offensive moved swiftly across the old 1917 battlefield, recapturing the villages of Guémappe and Wancourt. By nightfall the front had been pushed almost a kilometre beyond Monchy le Preux.

The next stage of the offensive required the Canadians to pass through the Fresnes-Rouvroy Line. Some progress was made on the 26th and 27th but the fighting became ever more bitter on the 28th and the 2nd Division wore itself out in the face of a determined German defence by the Württemberger Regiments. During the night of the 28th/29th August the 2nd Division was replaced by the 1st Canadian Division.

The 48th Highlanders were tasked with taking the hill known as the Crows Nest on 1st September. It would still be dark but that would be to the advantage of the Canadians.

At 0450 hours the Canadian guns opened up and the leading companies leapt to their task.

All went well and the casualties were light as the men slithered their way across the battle churned fields to their objectives. As soon as the barrage moved off the crest of the Crow’s Nest, Captain Samuel’s No 2 Company stormed up the slope and took the German machine gunners before they had been given the slightest chance of setting up their guns. 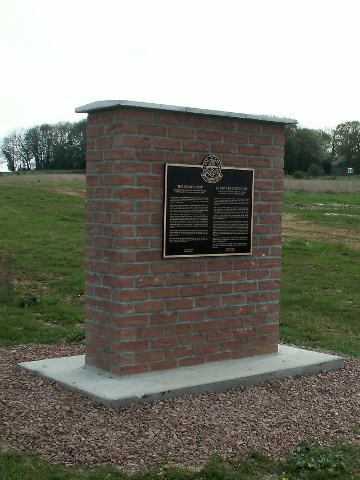 This commemorative plaque was unveiled on the 27th April 2010 in the presence of Canadian and French dignitaries by members of the 15th Battalion Memorial Project.

Following a fruitful visit in November 2009 the Regiment had gained the help and participation of local landowners, Bruno Marquaille and Patrice Boulanger, regarding the possibility of erecting a small monument to the 15th CEF.

In the intervening few months M Marquaille had offered the land and organised the construction of a brick plinth to support a commemorative plaque.

Canadian historian Michel Gravel engaged the interest of M and Mme Topart de Moriame the owners of the Château de Hendecourt, the ruins of which had been captured during the Canadians attack. They in turn very kindly offered to allow the party to use their grounds for the reception.

On a glorious spring afternoon a small gathering of local villagers, dignitaries and military representatives of the Canadian and French forces gathered at the Crows Nest with Brigadier General Greg Young and a party of the 48th Highlanders of Canada.

An impromptu bonus was a fly-past by fighter aircraft of the Armée de l’air base at Cambrai. A few seconds and they were gone again but they were accidentally recorded during Lt Colonel Marcel Cloutier’s speech (Look behind him in the photo below).

Aumônier Gabriel Legault spoke during the consecration of the monument of the Highlanders’ motto: Dileas Gu Brath, forever faithful, and how it applied to us all today.

Music for the occasion was provided by the Ecole de musique de Marquion and the Somme Battlefield Pipe Band. Pipe Major Yves Holbecq proved to be one French piper who knew the popular Canadian tune : The Maple Leaf Forever.

The afternoon was rounded off by a reception at Hendecourt Château.