At 0530 hours on the morning of 14th April 1917 under the cover of a thin barrage the Newfoundland Regiment advanced into a salient to the east of the village.

This was the first time that the Allies had encountered the German’s new system of using an elastic defence. At the Somme the Germans had been ordered to stand fast and retake all territory as soon as it had been taken. This tactic had led to casualties as high as those of the British attackers.

Now they would have a front line which would be allowed to give under pressure, but backed by counter-attack units waiting in the rear.

The Newfoundland’s 88th Brigade were attacking on a two battalion front behind a creeping artillery barrage. The Newfoundland Regiment, commanded by Lieutenant Colonel James Forbes-Robertson, was on the right and the 1st Battalion Essex Regiment on the left.

Panorama of the battlefield – The spire of Monchy on the left, Infantry Hill on the right

The Caribou faces towards a hill known at the time as Infantry Hill, and having reached that point the attacking units found themselves pinned down by the German counter attack. The Essex Regiment had taken part of the objective but the Newfoundlanders were being badly hit by machine gun fire.

Although the Newfoundlanders pressed on, German counter-attack battalions were swiftly deployed against them and soon the battalion found itself being attacked from three sides.

By 1000 hours there wasn’t a single unwounded Newfoundlander east of Monchy.

The only troops available to prevent the Germans from taking the village were those manning the Battalion Headquarters – about twenty men. Of these, only ten managed to avoid the German bombardment and took up positions for the defence of the village.

For the next four hours these ten men were

…all that stood between the Germans and Monchy, one of the most vital positions on the whole battlefield.

In its struggle to seize and hold the bridgehead at Masnières in November 1917, coupled with earlier fighting at the Third Battle of Ypres, the Newfoundland Regiment had earned unique recognition. It was granted the title Royal by His Majesty King George V.
No other regiment of the British Army received such an honour during the First World War whilst fighting was still in progress.

From the edge of the village the Newfoundlanders kept up their fire against the German front line until they were finally relieved. The Germans did not succeed in mounting an attack on the village.

166 Newfoundlanders were killed that day, with a further 141 wounded, and 153 captured.

The experience put off all thoughts of mounting a small scale offensive in the area.

The village of Monchy le Preux had been taken a few days earlier by the 37th Division and their memorial is within a short walk of the caribou. Walk along the street to the left of the caribou – there is no parking area at all. As the road bends sharply to the right you will see the 37th Division’s memorial on the bank to your right. 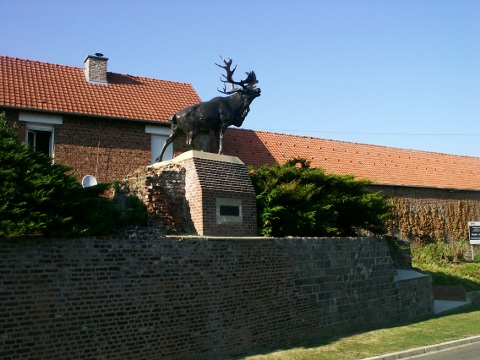 The Newfoundland caribou sits on a German bunker

When the subject of erecting memorials to the, by then, Royal Newfoundland Regiment was raised, Father Nangle contacted Gotto who put forward the idea of : …elevating the caribou into the national emblem for the Dominion. I would propose a caribou standing on a hilltop bellowing defiance.

Father Nangle dedicated each of the five Caribou memorials in Europe. Each cost approximately £1,000 (You won’t even get the supporting wall for a plaque for double that price in 2016 !).

Cochius was also responsible for laying out the Bowring Garden in St John’s, Newfoundland where a copy of the Caribou monument can be found close to the Fighting Newfoundlander. By coincidence, Bowring Park also contains a copy of Sir George Frampton’s famous statue of Peter Pan. Sir George was a friend of Lady Feodora Gleichen who sculpted the monument to the 37th Division just round the corner.