From the caribou walk a few hundred metres further up this street and on the sharp bend to the right you will see the 37th Division’s memorial on the bank to your right. 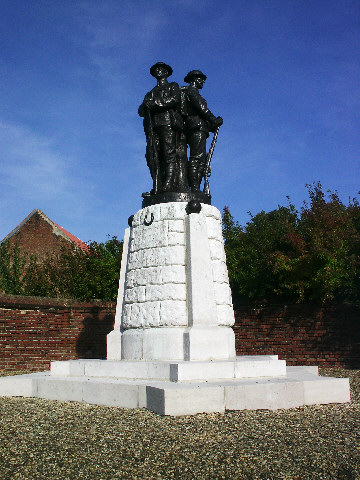 The Battle of Arras opened on the 9th April 1917 with the British pushing against the German held villages on the eastern side of Arras — towards Cambrai.

During the initial attack by VI Corps the 37th Division found themselves as the reserve behind the 3rd, 12th and 15th Divisions. Following the opening attack at 0530 hours the plan expected the line to have advanced as far forward as La Chapelle de Feuchy by 1500 hours.

If you come out from Arras along the D939 from the Railway Station you are driving along the main road towards Cambrai and taking the same direction as the British offensive. The village of Tilloy-les-Mofflaines was the German front line and had been taken by the 3rd Division that morning.

If asking for directions by the way, names ending in -oy in French are pronounced -wah! as opposed to -oi!

The area is surrounded by numerous Commonwealth Cemeteries and you will realise that it is only a couple of kilometres away from Arras. On 31st August 1914, two cyclists out for a ride encountered 72 Uhlans — Tilloy was to remain in German hands for two and a half years.

If you continue driving out the main road towards Monchy you will see the the memorial Cross to the 12th Division at Feuchy on your right just after the Cemetery and before you cross the A1 Autoroute. Just to the north of you is the village of Feuchy itself, where between 1st and 5th October 1914 General Barbot and his Alpine 77th Division made their heroic stand and saved Arras.

The 37th move to the attack

This was the area of the Brown Line and having reached here, the 37th Division was brought up through the other Divisions in order to carry the attack into Monchy. This was supposed to have happened on the evening of 9th April, but a sudden turn in the weather made advancing much more difficult. It was so cold that men would freeze to death during the night

That evening the 37th continued the attack in the face of snow past Feuchy Chapel reaching an area known as Orange Hill to the south-east of Monchy (There is a CWGC Cemetery there).

It was only on the night of 10th April that the 37th Division and its six supporting tanks were in a position to consider mounting an attack on Monchy.

The attack was delivered with the 111th Brigade on the left facing Monchy and the 112th on their right advancing towards La Bergère crossroads (where you will see the Windmill CWGC Cemetery and turn left towards Monchy).

Standing up on this hill by the monument you get an immediate understanding as to why the village was so important and why the Germans had spent such a long time fortifying it (The Newfoundland Caribou is erected on top of a German bunker).

The attack got off to a bad start. At 0500 hours on a freezing cold morning the infantry and tanks set off across the snow, but the artillery was late in getting into position and when they did eventually open their bombardment they began by shelling the advancing troops who had not been warned of any postponement. Amongst the numerous casualties of this friendly fire was one of the tanks.

By 0900 hours though, Monchy was in British hands. The Germans launched a number of counter-attacks but these were driven off.

The village remained in Allied hands until it was abandoned during the German Spring offensive of 1918. Monchy was finally retaken again by the Canadians on 26th August 1918.

Over three days and at remarkably little cost in terms of casualties, General Allenby’s 3rd Army had made remarkable gains. Unfortunately this story was not about to be repeated a short distance to the south where General Gough’s 5th Army was about to launch a supporting attack on a village called Bullecourt.

Sculpted by Lady Feodora Gleichen the monument was inaugurated on the 9th October 1921 in the presence of her brother Major General Lord Edward Gleichen who had commanded the 37th Division in 1916. Another former Divisional commnder was also present : General Sir Hugh Williams. Amongst the French representatives was Général Debeney.

The eight metre high monument represents three soldiers in battle order, standing back to back in a position of vigilance.

Originally there were German 77mm canon on either side.

Lady Feodora Gleichen was a renowned sculpteress and was also responsible for (amongst many) the figure of Diana in Hyde Park, London; Edward VII at Windsor Hospital and Queen Victoria in the RVH Montréal. She would become posthumously the first woman member of the Royal British Society of Sculptors.