Today the small village of Bullecourt to the south-east of Arras is a place of pilgrimage for many Australians who come to remember and reflect upon the feats of arms of their soldiers in April and May of 1917.

Though not so well known as their struggle for Pozières in 1916 or the defence of Villers Bretonneux in 1918, Bullecourt has become a symbol for some, where heroic Diggers were cut down trying to achieve the impossible, through the incompetence of the British Military Staff. 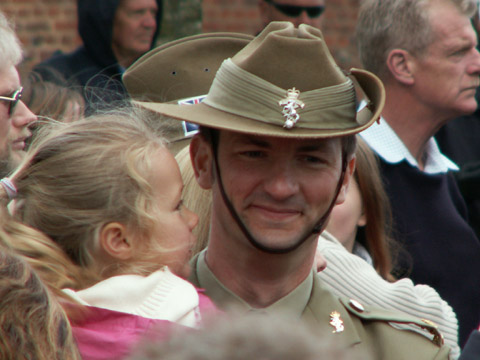 On the Saturday nearest to Anzac Day (25th April) Australians gather with the village people to remember. Following a wreath laying ceremony at the Commonwealth and French memorials the gathering make the short walk to the Digger Memorial on the outskirts of the village.

As time has gone on, studies have shown that not all of the incompetence was on the British side, there were also failings within the Australian Staff.

So how did this one café village become such an important place to Australians?

As the battle of the Somme was wound up in November 1916, a meeting was held between the Allied commanders at Chantilly (just outside Paris). The decision was reached by Generals Haig and Joffre that on the Western Front things would recommence in February. The generals looked towards the campaigns of the new year for the answer to the unsolved question – how to make a breach in the German positions.

However things were about to change because the failure of their campaigns in 1916 had at least one more casualty to come.

The French Commander in Chief: Général Joffre was quietly relieved of his command and promoted to Maréchal de France. His replacement: Général Robert Nivelle, claimed to have the answer. In 24 hours he was going to smash his way through the German lines at the Chemin des Dames to the east of Soissons.

Just as the British now look back on the Somme and wonder why the Generals ever thought that plan was going to work, so the French point to the débâcle of the Nivelle offensive as one of the catalysts for the mutinies within their army.

Nivelle not only wanted the British to attack in the area of Arras he also wanted it under his command and such were Nivelle’s powers of persuasion that the newly appointed British Prime Minister, Lloyd George agreed.

Sir Douglas Haig, the British Commander in Chief, was furious and the terms of the co-operation were modified. Haig would act at Nivelle’s direction but with the ability to refer matters back to London if he felt they were jeopardising the Army.

The Germans fall back

The German High Command had learnt during the Battle of the Somme that the mantra of: Not an inch, as they defended or counter-attacked to regain lost ground, regardless of casualties and their strategic importance, had cost them dear.

Général Joffre had not been the only senior casualty of 1916. In suggesting that by attacking Verdun the German forces could bleed France to death, General Falkenhayn had overlooked the inherent danger. As the French bled to death the possibility of actually taking Verdun had become a tantalising proposition and the Germans had fallen foul of their own recipe for victory.

Ultimately they neither gained Verdun nor inflicted a sufficiently higher proportion of casualties on the French to make a material difference.

General Ludendorff (replacing Falkenhayn) set about building a formidable and highly flexible system of defences on well chosen ground. This Hindenburg Line was shorter (requiring fewer troops) and was in a greater depth than anything that they had previously prepared.

It ran from Arras to the Aisne river and when, in February and March 1917 the Germans withdrew to it, they gave up towns and villages that the British had fought for and failed to take in four months of fighting in 1916.

This change in the front line forced alterations on Général Nivelle as the British now held areas that they had been expected to attack.

The British would now open the offensive with attacks around Arras followed over the next couple of days by a massive French push made with five armies attacking along the Oise and Aisne.

Despite the misgivings of a new French Government, Nivelle was given the go-ahead, with the proviso that he had to achieve his breakthrough in 48 hours or call off the assault.

In the run up to the opening of the Nivelle Offensive the weather had been dreadful and as the British prepared to launch their offensive on 9th April 1917 it started to snow. The weather held up the French attacks, but it made little difference.

The Germans had a copy of Nivelle’s plans and were waiting for him.