At 0300 hours Captain Bert Jacka VC MC met the first tank to guide it up to its position. Despite having a far shorter journey to achieve the tanks were once more late in arriving. Jacka asked the commander of the tank if it was actually going to be possible for him to reach the Hindenburg Line within the allotted fifteen minutes. Impossible, was the reply. 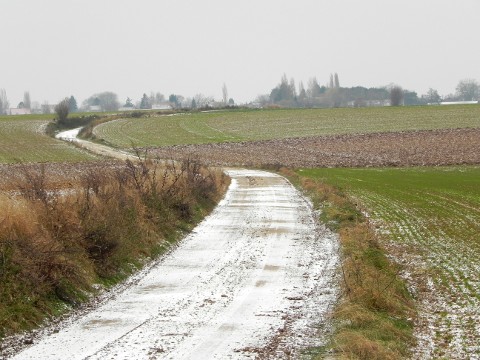 The Sunken Road as viewed from Central Road

The Australian Infantry would in all likelihood reach the German wire before the tanks did. The battalion commanders asked for the tanks to commence fifteen minutes earlier – but it was not only too late to change the plan it was also immaterial, the majority of the tanks were not going to be in place even for Zero.

At 0430 hours the three tanks which had reached the starting line in front of 4th Brigade (on the right of the Central Road) trundled forward. Within minutes green flares were rocketing skywards from the German lines. The tanks had been seen.

At 0445 hours the 4th Brigade moved forward. The Australian Official History describes it as having possessed a remarkable group of commanders. Major Percy Black leading the 16th Bn on the far right and behind him, his old friend Captain Harry Murray of the 13th Bn.

On the left, Lt Colonel Peck’s 14th Bn had the advantage of four experienced company commanders. Supporting them in the 15th Bn was the highly capable Lt Colonel McSharry.

The first wave advancing from the sunken Quéant Road had 700 metres of ground to cover whilst the supporting battalions over a kilometre.

By the time that they reached the wire entanglements the soldiers were, as Jacka had feared, in front of the tanks and the wire was far from well cut. As he reached the wire Percy Black called out: Come on, boys, bugger the tanks!, and led his men through the wire.

By the time that Murray and the 13th Bn had reached the wire one of the tanks was almost through. Dead and wounded from the 16th Bn hung on the wire and littered the ground, leaving a morbid trail which indicated their progression towards the German support trench (OG2) 160 metres away; itself protected by yet another layer of wire.

As Percy Black encouraged his men forward, he ordered his runner back with the message that the first objective was taken. As he spoke he was hit by a bullet and died instantly. 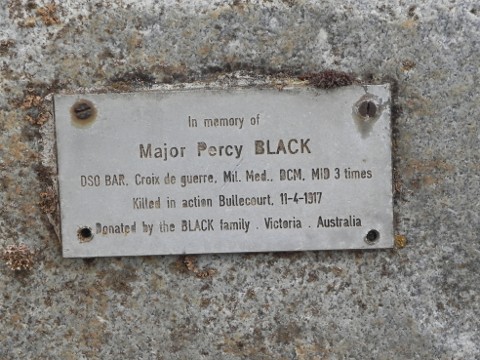 It was difficult to get through the wire but the two trenches (OG1 and OG2) were connected by a number of crosstrenches, on the map it looked like a ladder laid flat. (These were later labelled A-M from the right.)

On the left the situation was very much the same for the 14th Bn leading and the 15th Bn coming up behind. The two battalions were supposed to have kept well away from the Central Road on their left, but some strayed over and were caught by the German machine guns trained on the road.

Despite the opposition, the German front line was taken and the two battalions moved forward towards the second by means of the crosstrenches. In places OG1 had been completely obliterated making it hard to identify. In other places even the wire was intact.

To make matters worse for those nearest the village, they were exposed to heavy fire coming from Bullecourt. A few men managed to get through to OG2 and the task of moving to the left was begun.

None of the tanks that were supposed to have dealt with the gap between 4th and 12th Brigades had reached the German lines at this stage and the only thing for the infantry to do was bomb and fight their way through the trench system.

In theory the 13th and 15th Battalions were now supposed to be advancing on to take Riencourt.

Two recently dug German trenches led back from their front lines. On the right and in front of 4th Brigade was one that was christened Emu Alley, whilst to the left and just outside of their area was another called Ostrich Avenue (and which was supposed to have been dealt with by the tanks).

A party under Captain Dunworth of the 15th Bn succeeded in getting into Ostrich Avenue and put the occupying Germans to flight but the casualties were so high that he was forced (being himself wounded) to make his way back to OG2. It was the last time that day that the Australians would gain Ostrich Avenue.

On the right however Captain Somerville (16th Bn) charged Emu Alley and made his way as far as its intersection with the road to Riencourt. Further progress was deemed out of the question by
Captain Murray and the other commanders deferred to his experience.

The task was to hold on to OG1 and OG2. To the right, the trenches had to be blocked to prevent the Germans getting back into them whilst to the left they had to force their way through to the 12th Brigade.

Unlike their compatriots on their right the 12th Brigade were not required to advance any further than OG2. Thus they attacked with just two battalions; the 46th Bn up front to take OG1, followed by the 48th Bn who would continue the advance as far as OG2.

They would advance totally exposed to the enemy positions in Bullecourt village, their only protection coming from the slight slope in the ground and a bombardment until 0500 hours on the village. At that moment the bombardment would stop in order to allow the tanks and 46th Bn to enter Bullecourt.

The plan went wrong from long before its launch. The infantry were in their jumping off positions at 0330 hours and by the time the battle was supposed to start only one tank had reached its position.

The orders to the 46th Bn were that they were to follow the tanks: fifteen minutes after the tanks pass the jumping off trench…

This was a subtle change on the orders from Brigade – the infantry would give the tanks fifteen minutes and then go, regardless, at 0445 hours.

The ill-conceived orders meant that at 0445 hours as 4th Brigade were launching their assault and the bombardment fell on Bullecourt, the 46th Bn sat it out in their positions waiting on the tanks.

At 0500 hours the bombardment of Bullecourt stopped and the 46th Bn still hadn’t moved. With daylight breaking Captain Davis asked Lt Colonel Denham what he was supposed to do: Go ! He was told.

Immediately behind his men Lt Colonel Leane of the 48th Bn had already issued orders: his men were not to wait on the tanks. When he asked for the bombardment to be re-commenced on the village he was told that this could not be done as tanks might be trying to get in. Leane could not convince his superiors that this would not be the case.

As they went forward the 46th Bn suffered severe casualties from the German defenders in the village and this pushed many sections over towards the Central Road with its uncut wire.

They reached OG1 and the 48th Bn came up and passed through. The wire between the two trenches was uncut but by 0556 hours messages were sent back stating that their section of OG2 had been seized.

The task of bombing left and right now began. In this instance the 46th in OG1 made good progress to the left towards Bullecourt whilst the 48th made better progress to the right.

Where OG2 was cut by the road between Bullecourt and Riencourt (known as the Diagonal Road) it was impossible for the Australians to get across the road and continue their advance into the German lines. The only bonus was that it was just as difficult for the Germans to counter attack.

Rough disposition of the Australian infantry

By 0700 hours the peculiar situation had thus arisen in 12th Brigade’s area that whilst they held both German forward lines the two battalions actually only overlapped for about 250 metres in the middle of their deployed positions.

One tank had managed to get as far as Bullecourt, the rest were for the most part burning well behind the Infantry. The infantry however would be able to hold on to their newly won position if enough bombs (grenades) and ammunition were sent out.

Above all else the Australians needed artillery support but no matter the number of requests or flares fired, none was forthcoming. The reason was the abyss in information between what was happening in the trenches and what was thought to be happening there.

All information reaching the senior commanders suggested that not only had the 4th Brigade taken their first objectives but that they were also now advancing on Riencourt. Australian troops were being spotted everywhere by the observers.

The problem was compounded by the fact that in the snow it was difficult to judge distances and the light of the dawn made it difficult to tell the difference between friend and foe. Thus retreating Germans were mistaken for advancing Australians.

Somewhere along the way, Tanks had been seen advancing beyond the Hindenburg line, and General Gough accordingly warned the 4th Cavalry Division to be ready. The 17th Lancers were moved up to Écoust.

Thus whilst the artillery working on the feedback from its Forward Observation Officers fired shell upon shell on the rear lines behind Riencourt allowing the men from a phantom 4th Brigade an unmolested access to the village, the real 4th Brigade was still crammed into the Hindenburg line. The villages either side, full of German defenders were left untroubled by the artillery.