Webmatters : Bullecourt 1917, a short tour of the battlefield

This is quite a close knit battlefield, and if you are pushed for time, one that is easily done in a vehicle. If time is available and the weather reasonable it is also quite simple to walk the battlefield.

The village is easily accessed and the monuments and sites are well sign posted. Approaching from Écoust you will note the water tower with its commemorative inscription. Just before it is the start of the Australian Trail along the former railway embankment. 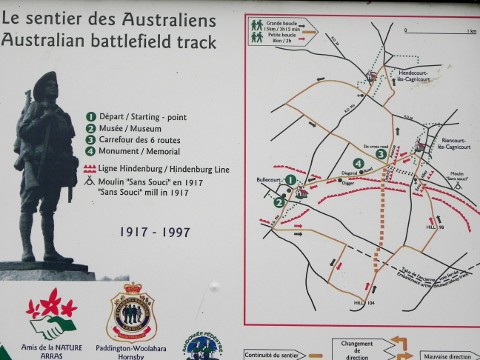 The easiest place to start is at the village church. Here you will find a descriptive board of walks that you can make in the area.

In front of the church is the Slouch Hat memorial which commemorates the 3 British and 4 Australian Divisions who fought here in 1917. Just to its right is a monument to the men of D Battalion HBMGC (The tank crews) who served and fell in both battles. Opposite in front of the Mairie is the village memorial.

A quick tour of the village

If you go up past the Canberra Café and take the road to you left, the Rue de Quéant, you will descend the Sunken Road which was used by the Australians. Why this was called the sunken road becomes apparent fairly quickly. Be aware that there is not a great deal of room to turn a vehicle. 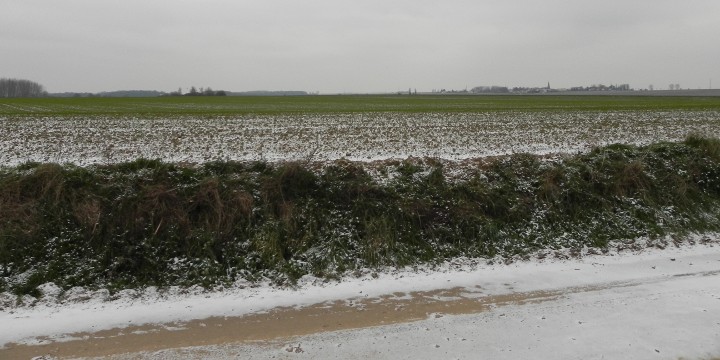 The Digger Memorial Park centre left, Riencourt to the right

If you look to your left and across the fields, on the ridge you should be able to make out the flags of the Australian Memorial which is situated just off the Diagonal Road.

This gives you a very good idea as to the slope in front of the Australians as well as showing how exposed they were to the village to the left. Looking down towards the Central Road you have the railway embankment on your right and you can appreciate the cover that the road gave in this sector.

The line of trees on the right marks the railway embankment
The Australians crossed from right to left.

Come back up into the village. The road opposite leads down to a Calvaire. The 62nd Division attacked the village from the area behind and to the left towards Écoust.

Return to and continue past the church, you will come to a junction telling you to follow right for the Australian Memorial.

You are now on the Diagonal Road and in this area the German support line (OG 2) followed alongside the road.

The Digger Memorial is located between the German front and support lines and is dedicated to the memory of the thousands of Australians killed and wounded in the two battles of Bullecourt in 1917, and to their comrades who fell and lie forever in the soil of France.

Continuing along the road towards Riencourt you will come to a small but well visited cross on the left hand side of the road.

OG 2 crossed the road from the field on your right and for much of the battles this was a sticking point for the Australians trying to further their advance down the trench towards Bullecourt.

It is difficult to park so make sure that your vehicle can be seen. 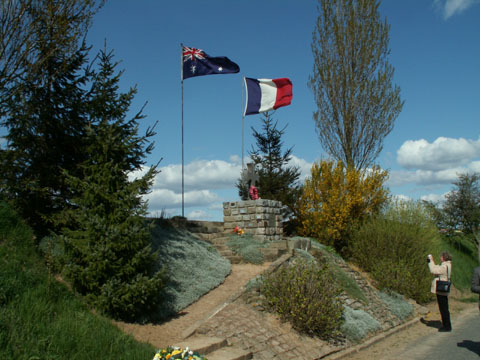 This memorial cross has had numerous personal messages added to it over time and if you climb up behind it you get a good view of the battlefield. Immediately in front of you, across the road, is the area of the action for which Lt Rupert Moon was awarded the Victoria Cross.

A little further along the road you come down a slight dip and there is an obvious track coming in from your right. This is Central Road. 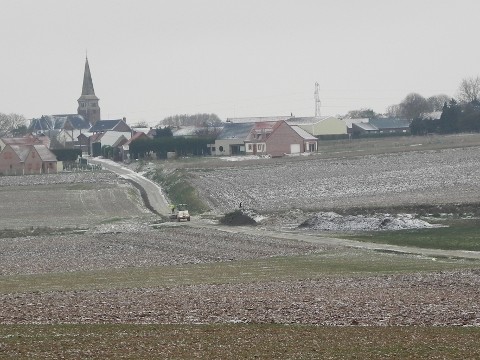 Where it meets the Diagonal Road is the junction known as Six Cross Roads, despite the fact that there are now only 5 of them. Off to the left is the area where Captain Maxfield held out on the 3rd May 1917.

If you look down Central Road to the right you can just make out where it meets up with the Sunken Road. The line of trees in the distance is the Railway Embankment from which the Australians moved forward.

If you continue on up the hill you will come into Riencourt.

Within the village follow right towards Quéant. You will soon see an oratoire (small chapel) which often has a pile of the iron harvest alongside.

Never touch anything you see. 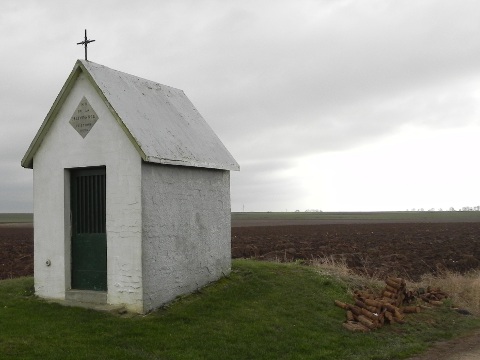 This is the top of the secondary track from the railway. From a short distance down it you can gain a good view of almost all of the battlefield.

The largest local burial ground for Australians is Quéant Road at Buissy.

From Riencourt it is possible to do a short circuit visiting the cemeteries in the area whilst also encompassing the action at Lagnicourt.