The Germans’ withdrawal to their new position meant that for General Sir Hubert Gough’s Fifth Army any possible participation in the forthcoming offensive depended entirely on its ability to close the distance between itself and the Germans.

If it could do so it would be in an splendid position to threaten the German line which ran south-east out of Arras. If Sir Edmund Allenby’s Third Army punctured the Hindenburg Line in front of Arras then Gough’s troops would be positioned behind the retreating units.

There was however a major problem. Gough had handed over both his II Corps and XIII Corps to the First Army along with much of his artillery in preparation for the Battle of Arras. He had been reduced to two Corps: V Corps and I Anzac. 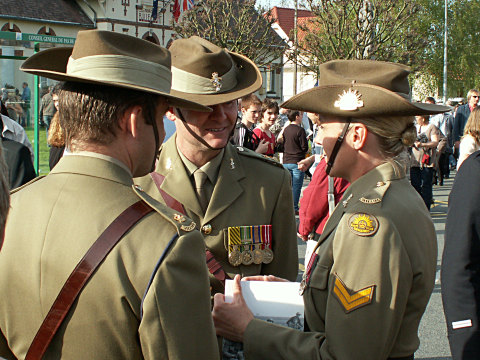 On 16th March, Gough was ordered to get his heavy artillery forward as far as the line: Beugny – Mory – Hamelincourt, in order to bombard the German positions from the south. This was easier said than done because the main road up from Bapaume was a mess and had not yet been repaired.

Gough proposed attacking the Hindenburg Line as soon as possible after the Third Army had opened the battle. The ideal position to do so was near the village of Quéant where a switch line joined the Hindenburg Line. This secondary position ran northwards to Drocourt (and would become known as the Drocourt-Quéant Switch).

If the Germans were forced to retreat it was certain that they would fall back to this trench system and the taking of its junction with the Hindenburg line would put that notion in peril.

The English term Hindenburg Line does not convey the fact that it was a defensive system constructed in depth with formidable belts of deep barbed wire in front of layers of trenches.

In this sector it had been constructed on the reverse slope of the hill meaning that although the defenders would only see attackers at the last moment it offered the advantage that the Allied artillery couldn’t see if they were hitting their targets.

Despite its obvious strength Gough believed that the Germans were retreating (as opposed to deliberately retiring) and reiterated this viewpoint on the 24th March to GHQ. The decision was taken that with only two Corps available to him, Gough would limit any assault on the Hindenburg line to the seizing of a sector and allowing the 4th Cavalry Division to pass through.

Gough outlined his ideas to Birdwood and Fanshawe. On 2nd April the village of Croisilles had fallen to the 7th Division by the simple expedient of passing it on either flank and mopping up the garrison afterwards.

As battle plans were made snow began to fall on Bullecourt

This was all subject to the condition that the intervening villages were captured and that the guns could be brought up in time to deal with the formidable banks of wire and entrenched defences.

The frontage of the attack would be almost three kilometres and would have to commence from positions prepared immediately in advance.

Gough was now faced with a dilemma, he needed his artillery and its ammunition at the front quickly. Bringing it forward wrecked roads that were already in a poor state of repair. He couldn’t have both, and eventually settled for repairing the roads first.

Although Haig had given the go-ahead for the attack on Bullecourt on the 2nd April it was only on the 7th that the Field Artillery was finally in a position to seriously undertake its task of destroying the German wire. Gough remained enthusiastic and assured his commanders that they would only attack once everything was ready.

The Australian Infantry had arrived two days beforehand in a position along the railway embankment on the eastern flank of Bullecourt village. They could finally see what they had to undertake and it was not going to be easy.

On the 31st March Lt General Birdwood had already made known his apprehensions. He was being asked to send his men into a re-entrant some 1500 metres wide between the villages of Quéant on the right and Bullecourt on the left.

A re-entrant is the opposite to a salient. Instead of the line jutting out into enemy territory (as at Ieper for example) in this case it was dented inwards. If pierced it would allow the Australians to strike further and quicker into the German rear areas, but, to do so meant running the risk of being fired at from left, right and front as they undertook the manoeuvre.

As the Australian Official History so eloquently puts it:

…in the conditions which then governed warfare in France, victory might have been sought almost as reasonably by a plan to capture the moon.

Birdwood objected and the idea was dropped.

On the 7th April, Australian patrols were sent out to check the wire; it wasn’t cut. It would take another eight days to compete the task.

Gough was deflated. He would be forced to sit on the side lines whilst First and Third Armies took all the glory.

At 0530 hours on the 9th April the great undertaking began. The bombardment had been more intensive than that on the 1st Day of the Somme with almost twice as many guns per metre. Tanks were involved and tunnels were used to shelter and conduct the men as close as possible to the enemy.

By and large the Third Army made important gains whilst to the north of Arras the Canadian Corps created national mythology in their storming of Vimy Ridge.

All the initial reports reaching Fifth Army were of success after success. Gough a cavalryman was literally champing at the bit to get out there and do something.