On the afternoon of the 9th April General Gough received a visit from Lt Colonel Hardress-Lloyd of ‘D’ Bn the HBMGC. With him was Major Watson whose 11th Company was the one attached to Fifth Army.

The Tank units were obviously something completely new in the British Army.

The first use of tanks had been by the British on the 15th September 1916, the French were about to use their own for the first time on the Chemin des Dames.

They had been grouped together to form four battalions ‘A’ to ‘D’ and each was to be comprised of three companies of at least twelve tanks apiece. 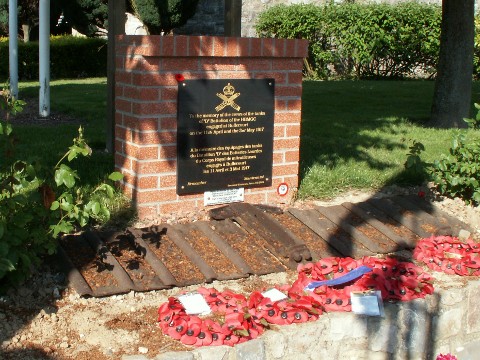 The HBMGC Memorial at Bullecourt

Major Watson and his men were far from experienced and were, for the most part, equipped with the old Mk I type. They had however been hard at work in the practise area of Blangy sur Ternoise (not far from the battlefield of Azincourt) and had been brought down by train to a quarry at Mory just behind the lines.

Watson himself had been posted into the Tanks from a cyclist battalion whilst most of his men were drivers and mechanics from the Army Service Corps.

Their inexperience was rudely demonstrated when they almost knocked down one of the offices as they unloaded at Achiet le Grand station.

Within seven months tanks would be operating en masse with remarkable success at Cambrai but for the moment nobody really had much of an idea how to use them. The current habit was to allot them piecemeal here and there, their task being to deal with strongholds previously encountered by the infantry.

The Tank commanders felt and argued that this was backwards thinking. Tanks, as armoured vehicles, should be going forward with the infantry (if not in advance), in order to crush the enemy’s defence systems.

The problem was the reality of the tanks’ reliability. They could almost certainly be relied upon to break down. The infantry officers preferred to have a rolling barrage in front of them. Artillery was certain, tanks were not.

Now, Major Watson argued, Fifth Army was short of artillery so why not use the tanks as a group in front of the Australian division facing the re-entrant. The tanks would go forward – without a barrage – surprising the enemy. As they reached the Hindenburg Line the barrage would open up dealing with the German artillery’s ability to counter the tanks.

Australians would now pour through the gap and seize the German trenches.

Gough accepted the idea with open arms – they would attack at dawn the following morning !

To a doubting Lt General Birdwood commanding I Anzac, Gough explained that the tanks would go forward, crush the defences, and then by means of a display or whatever, wave the infantry forward.

Nothing too difficult then and the scheme would only be used if the Third Army at Arras looked likely to be able to deploy its cavalry.

If the Tank crews lacked experience, it was as nothing compared to the Australians who had never worked with the machines before but Watson and his CO were so keen to give their plan a go that Birdwood, impressed by their attitude, agreed.

The Australian 4th Division who were in the front line, would check the wire and scout the enemy trenches (which Gough still felt might have been vacated as the Germans continued their supposed retreat). If the trenches were still occupied then the tanks would be used.

Initially they would be used only in front of the Australians but then, having occupied the Hindenburg Line four would wheel left and subdue Bullecourt with the aid of an Australian battalion. This would be the signal for the 62nd (West Riding) Division of V Corps to advance and seize the village.