Following the fiasco of General Gough’s battle plan for dawn on the 10th April 1917 the commanders of the V Corps, I Anzac and 4th Cavalry Division were summoned to Fifth Army HQ at noon that same day.

Gough stated that on the Arras front the Third Army were pressing the Germans; it was therefore paramount that the Fifth Army assist on the right flank.

Unless the Germans retired first, the attack on Bullecourt would proceed at 0430 hours on the 11th. Although Lt General Birdwood commanding I Anzac Corps expressed doubts about the tanks, Gough insisted. The tanks had failed to show due to the exceptionally bad weather and Field Marshal Haig desired that the attack went ahead. 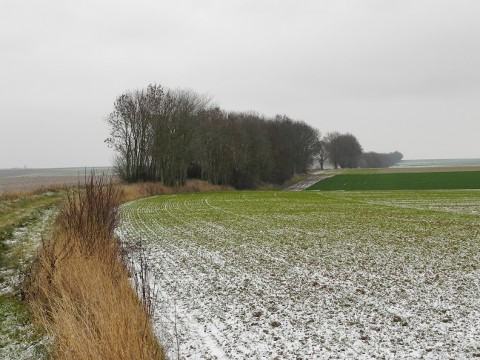 Along the Railway Embankment – Bullecourt is to the left

Changes were however made to the original plan. Having learnt that the wire in front of their positions was now at least partially cut, the Australians decided that they would follow the tanks after fifteen minutes, regardless of whether or not they were signalled to do so.

Six tanks would form up in front of each of the two Brigades. As they reached the German front lines the two flanking tanks would turn outwards providing additional protection to the advancing infantry.

Because the Hindenburg Line reminded the Australians of their fight for the trenches at Pozières (in 1916) they named the two lines OG1 and OG2 (Old German).

Bullecourt would be drenched with gas at 0100 hours but to allow the tanks to achieve their surprise no preliminary bombardment would take place at Zero: 0430 hours. Once the tanks had passed the Hindenburg Line (0445 hours) a bombardment on the flanks of the attack would begin. At 0515 hours the bombardment would stop on Riencourt allowing the two battalions allotted to carry out its capture to proceed.

Until tanks and Australian infantry entered Bullecourt the 62nd Division of V Corps would remain in its trenches.

The troops who had crept off the battlefield less than 18 hours earlier began their march back to the front. Snow was still falling, forming a white sheet across the land on which, once again, the forward troops were required to lie whilst awaiting the tanks.

Basic disposition for the Australian infantry

On the right of a road running north from their positions on the railway embankment the 4th Brigade would advance with all four battalions. The 16th and 14th would take the Hindenburg Line and then the 13th and 15th would continue on to Riencourt.

On the left of this Central Road the 12th Brigade would attack with just two battalions, their task being for the 46th to take the German front line and the 48th to pass through and take the second before securing the left flank for the 4th Brigade advancing on Riencourt.

Because it was thought that Central Road would offer a shooting gallery for the Germans the two Brigades were to advance with a gap between them which would be filled once the men got into the trenches and bombing parties could be sent out to either flank.

The infantry term: bomb, in the Great War meant a grenade.