Webmatters : The Australian Memorial Park and Digger Monument at Bullecourt

The Digger Monument at Bullecourt 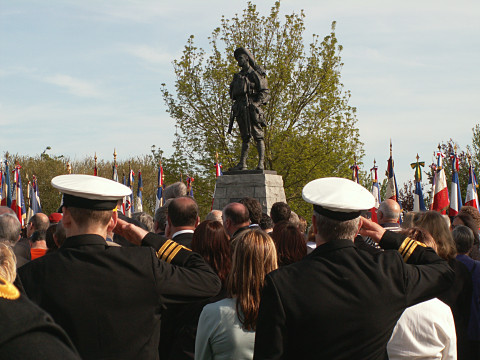 The village of Bullecourt is easily accessed and the monuments and sites are well sign posted.

There are numerous routes from Arras (see the linked map above). The route via the D5 through Neuville Vitasse and Croisilles brings you across the southern sector of the Arras battlefield of April 1917.

Approaching from Écoust St Mein you will note the water tower with its commemorative inscription.
Continue into Bullecourt village where you will see the Slouch Hat memorial in front of the church. A few hundred metres further on a sign post leads you off to the right towards the Australian Memorial.

The First Battle of Bullecourt on the 11th April 1917 was fought by the British 5th Army under General Sir Hubert Gough as a bolster to the main British Arras offensive being undertaken by the 3rd Army to its immediate north.

The Battle of Arras was undertaken by Sir Douglas Haig the British Commander in Chief in order to support a major attack to the south on the Chemin des Dames by the French under Général Robert Nivelle.

Lacking proper artillery support – because it was being used at Arras – the plan for the attack on Bullecourt relied heavily on support by a company of tanks accompanying the Australian 4th Division.

The tanks proved to be unreliable and further errors at command level led the Australian infantry to advance across a snow swept battlefield into the German Lines.

There they hung on throughout the day without proper support but were eventually forced back to their own lines. The Australians would take a long time before they would ever agree to work with tanks again.

A few weeks later on the 3rd May 1917 the action was repeated on a grander scale with the British attacking the village of Bullecourt itself.

That day only the Australian 6th Brigade managed to hang on to the seized trenches and their success forced the commanders to continue their efforts to take the village and the remainder of the Hindenburg line in its vicinity.

The battle for Bullecourt would continue until the 15th May when the Germans would finally retire.

Losses to both British and Australian units were colossal and the recriminations against the British High Command ran strong. In later years it has been shown that not all the errors were committed by the British especially during the planning and opening day of the Second Battle when Australian Staff also failed to learn from previous lessons.

The Memorial Park was opened on the 25th April 1992 and originally contained only the cairn with a memorial plaque.

In inaugurating the park the Australian Minister for Veterans’ Affairs, Ben Humphreys suggested that it would be nice to have a bronze statue on top of the cairn to set it off.

Peter Corlett from Melbourne was contacted and asked to create a work that would reflect the Australian soldier of 1917. In carrying out his research Corlett was surprised to discover that his own father, Private Kenneth Corlett, 4th Field Ambulance, had actually fought at Bullecourt.

Using an old photograph of Kenneth, Corlett sculpted his face for the features of his 1917 Australian ‘digger’ trying to capture in it the: ‘fresh face of a young man about to set off on a great adventure’. Great care was also taken to replicate the AIF uniform and fighting kit.

The statue was set into place and unveiled exactly a year later on Anzac Day 1993.

Ceremonies take place both in the village and here at the park every year on the Saturday closest to Anzac Day (25th April).

They are followed by a reception offered by the villagers in the village hall next to the Canberra Café.