The XVII Corps were directed to take an area between the Scarpe River (The VI Corps were on the southern bank) and Farbus Wood on their left. This gave them the major objectives of the village of Fampoux alongside the Scarpe and the southern edge of Vimy Ridge.

To this end the first wave of Divisional attacks were only to attempt to reach a line of trenches called Point du Jour and which thus formed the Corps third objective or Brown Line. Once that had been gained the 4th Division in reserve would thrust through to Fampoux on the Green Line or fourth objective.

Eight tanks were allotted, with four of them supporting 9th Division in their attack on the village of St Laurent whilst the other four would support 34th Division in attacking a small wood called the Bois de la Maison Blanche. The two groups of tanks would then turn inwards towards each other and the village of Athies.

The 9th Division had a very wide front and were able to attack with three Brigades up front. Their bombardment somewhat bent the General Orders about the use of shrapnel.

The Division’s Commander Royal Artillery (CRA) Brigadier General Tudor had insisted that with all the wee valleys and troughs in front of the Division it would be nigh on impossible for his gunners to accurately calculate all the angles necessary to make the best use of shrapnel.

Thus he suggested that using more high explosive shells would be the better option. It would appear that the Division got away with this by the simple expedient of not actually mentioning the fine detail in their submitted orders. HQ were thus allowed to believe whatever they wished about what type of shells were actually going to be fired.

The advance by 26th Brigade on the far right was a resounding success. St Laurent fell with little resistance and the Brigade moved on towards its next objective – the Blue Line – immediately in front of the village of Athies.

By now the Brigade was aware that across the river 15th Division were being held up by resistance in an area known as the Railway Triangle (because it formed a junction between two railway lines).

Putting down a smokescreen to cover the right, the artillery also hammered Athies into dust. When the Infantry went back onto the offensive they found the German defenders all too ready to welcome them and surrender. On their left the South African Brigade advanced right up to the Brown Line with hardly a pause. The wire in front of them had not been well cut but the four battalions of South African soldiers were allowed to simply trample them under foot.

It was exactly the same story for the third front line Brigade: the 27th. In front of 9th Division the German will to resist appeared to have evaporated. By 2000 hours over 2,000 prisoners had been accounted for and arguments will probably continue in knowing circles as to whether or not 9th Division should have been allowed to continue their excellent work against an obviously demoralised enemy.

Instead there was a lull in the attack whilst 4th Division were brought up, as per the plans to take the next objective.

They had been billeted to the west of Arras and had spent the morning making their way towards the front line in the showers of rain and snow. 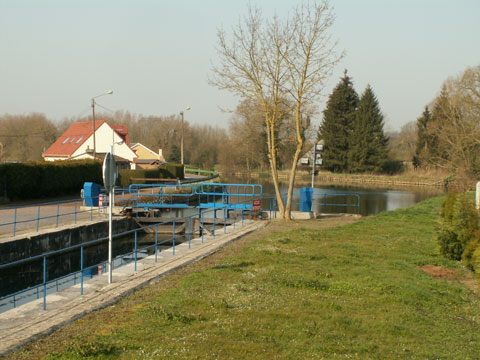 The Scarpe Canal at Fampoux

Their two leading Brigades the 11th and 12th were on the battlefield for 1200 hours and were ready to commence their attack a few hours later. Heading for the village of Fampoux the 12th Brigade passed through 9th Division at 1515 hours. Advancing with three battalions in their front line they came under ragged fire from their objective but nothing serious and their casualties remained incredibly light.

South of the Scarpe the units had been aiming for a system of trenches called the Wancourt-Feuchy line. On the northern side of Feuchy this same system was designated (By the British that is) as the Oppy Mericourt Line.

At 1640 hours the 2nd Bn Duke of Wellington’s went in and took Fampoux. This, like Feuchy, had just been subjected to its own special bombardment and little was left of it.

In theory the Duke’s were now supposed to have continued slightly but the defenders in the railway embankment on their right put up such a terrific fight with their machine guns that the Duke’s were unable to continue.

On their left, the 11th Brigade had a system of trenches known as the Hyderabad Redoubt as their objective. Their assault on the main trench line met with as little resistance as the 12th had encountered with many of the defenders either running away or just surrendering.

1st Bn Rifle Brigade (Which is the name of a battalion) came through from behind, kicked a football into the redoubt and rushed in after it.

The redoubt fell and with it one of the German Generals.

It would appear that his driver had run off on him which demands the question: had he run off with the starter or did the General simply not know how to drive ?

4th Division had suffered 302 casualties and had advanced the period’s trench warfare record of over 5 kilometres in a single day.

As the central Division of XVII’s attack the 34th had the Point du Jour trench line in front of the village of Bailleul sir Berthoult as its objective (Do not confuse it with the town of Bailleul near the Belgian border.)

The 101st Brigade had little difficulty in capturing its first objective — indeed it had so little difficulty it actually overshot before realising that they were already there. They then had to move on to the Arras-Lille railway line (Coming out of Railway Triangle) and this was duly taken: but a problem had arisen.

The 15th Bn Royal Scots (A footballers battalion) who were about to move onto the next objective had been following on so closely behind the leading units that their soldiers had become intermingled with them. When it came time for the battalion to advance they could only muster 130 or so men.

This wee force however went into battle and secured their objective.

To their left 10th Bn Lincolnshire Regiment had encountered some difficulties with uncut wire but again, they were left pretty much unmolested. The trenches in the Point du Jour were empty. Stoves were found still alight, food on the tables, mail waiting to be read but not a defender to be had — the garrison had fled.

The 103rd had set out well taking the first lines of trenches with ease but there the plan began to unravel. As they advanced towards the secondary objective – the Blue Line – they came under constant and heavy fire. To add to their confusion soldiers from the left flank 51st (Highland) Division appeared to cross over in front of them before falling back again.

By 1100 hours the situation was a bit of a mess with HQ not quite certain just what was going on. What actually was happening was that the 4th Bn Northumberland Fusiliers were fighting their way down the trench lines with bomb (Grenades that is) and bayonet.

During the attack Lance Corporal Thomas Bryan although wounded, went forward alone in order to silence a machine gun which was inflicting much damage. He worked his way along the communication trench, approached the gun from behind, disabled it and killed two of the team. The results obtained by Lance-Corporal Bryan’s action were very far-reaching.

For his act of courage Thomas Bryan was awarded the Victoria Cross.

He survived the war and died in Doncaster just after the end of the Second World War.

The 26th Bn Northumberland Fusiliers were ordered to attack the Point du Jour line at 1340 hours but they were immediately stopped in their tracks by heavy fire from their left.

The 34th Division would not advance any further that day.

The left flank of Third Army was formed by the 51st (Highland) Division who had the Canadian Corps of First Army on their left. Their objectives were slightly complicated in that although they were heading for the Point du Jour line as were the greater part of the XVII Corps they also had to tie in with the Canadians who had slightly different points of reference.

The Canadians had an additional Red Line objective and their Blue Line was thus not only their third as opposed to second objective but was also slightly in advance of the Highlander’s Blue Line. Some flexibility was therefore required of the 51st to ensure that the two armies advanced in a seamless fashion.

On the right the 152nd Brigade had few problems in reaching their Black Line first objectives (the German front line trench system) but the 6th Bn Seaforth Highlanders in particular had a hard fight. Trying from there to advance to their Blue Line the Brigade was held up by heavy machine gun fire and soon found that their own protective barrage was creeping away from them as they fell behind.

They did eventually manage to take the enemy lines but the hold up meant that they would have to accept that they wouldn’t reach the Brown Line third objective and had to settle for a front half way between the two.

On their left a company of the 4th Bn Seaforth Highlanders (154th Brigade) had been given the special task of nipping out a section of the infamous Labyrinth Defence System which had caused so much pain to the French in 1915.

They were successful but it was a hard fight. Many of the defenders fought it out to the end and the story played out here was very different to other parts of the battlefield where Germans surrendered at the first opportunity. The rest of the 154th advanced without mishap to their second objective but their advance against the Point du Jour Line was fraught with errors.

For whatever reason both the 7th Bn Argyll and Sutherland Highlanders and 4th Bn Gordon Highlanders veered off badly to the right. In the case of the Argyll’s they were so far off course they swung right across the path of the 152nd Brigade and took possession of a set of trenches that they firmly believed was their third objective.

The 4th Bn Gordons now in contact with the Canadians realised that they had become disorientated and pulled back again.

Meanwhile, Lieutenant MacNaughton of the 153rd Machine Gun Company was happily leading his two gun team forward into the Point du Jour line. He set up his two heavy machine guns, contacted the Canadians at Farbus Wood to his left and went for a dander round the German trenches. They were deserted — not a German in sight. Rather wondering what had become of the infantry his wee group spent the night in the German trenches and only pulled back in the morning when Germans started to filter back in again.