VII Corps formed the right flank of General Allenby’s Third Army. Their objectives were to advance on a line from Tilloy les Mofflaines south to Croisilles.

The commander: Lt General Snow, decided that a full frontal attack would serve them little purpose as his right flank was opposed by very strong German positions. He felt that a staggered attack starting from his left and northern flank would act as a lever against the German defences. As the pivot Corps they were starting later than the 0530 Zero Hour for the rest of Third Army.

On the left of VII Corps was 14th Division who were located opposite a section of the Hindenburg Line where it merged into the older defence lines forming a redoubt known as The Harp. To the right of that was the sloping line of Telegraph Hill. To help get the soldiers past the redoubt and over the hill fourteen tanks had been detailed to assist with the attack.

The opening artillery bombardment was planned so that at 0734 hours it would be falling just short of the German trenches allowing the attacking infantry to creep up behind its protective curtain.

The theory was, that by 1230 hours the leading waves of troops would have taken the second objective or Blue Line: the second line of German trenches. At that moment the next wave of assaults would go in and advance as far as a system known as the Wancourt-Feuchy Line: the Brown Line.

Looking towards Neuville Vitasse from The Harp on Telegraph Hill

The 42nd Brigade advanced swiftly and by 0845 hours the Blue Line and much vaunted Harp Redoubt had been taken. The tanks had done some good work but more often than not found themselves bogged down in the shell torn landscape.

On their right the 43rd Brigade had been having a harder time crossing Telegraph Hill but once into the Hindenburg Line they found demoralised Germans. Whilst many seemed prepared to surrender at the first opportunity there were still pockets of determined defenders in their machine gun posts ready and willing to fight it out to the last.

At 1230 hours the 6th Bn Somerset Light Infantry commenced their attack on the Brown Line. They managed to advance about 500 metres before being checked by machine gun fire. With 56th Division on their right similarly held up they could go no further.

At first glance the orders for the 56th Division seem fairly straightforward: advance as far as the Wancourt-Feuchy Line on a front of just 300 metres. However between them and it, stood the village of Neuville Vitasse.

The village had been heavily fortified and with the Hindenburg Line running around and through it, formed a serious obstacle to be conquered. Two tanks were to advance either side of the village with one of them specifically detailed to deal with a German outpost which had been set up in the local mill.

At 0745 hours the attack began with the 168th Brigade on the left and the 167th on the right of Neuville Vitasse. The mill fell quickly to a detachment from 3rd Bn London Regiment and the tank.

Fighting in the village itself turned out to be bitter and in the area of the church 8th Bn Middlesex Regiment had their work well cut out, whilst on the northern side a tank crushed the barbed wire protecting the German lines and the 12th Bn London Regiment got in and captured the trenches.

The decision had in fact already been made that no matter what the situation in the village, the attack around it would be pressed home. 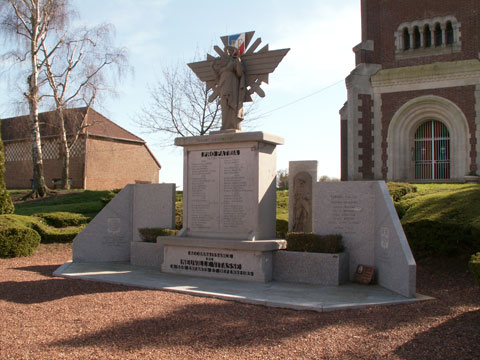 The war memorial at Neuville Vitasse

At 1210 hours the 1st and 14th Bn London Regiment assaulted the Hindenburg Line on the northern side of the village. The 14th Battalion managed to lose their bearings and veered off to the left sweeping all before them for about 600 metres. Suddenly realising that somewhere along the way they had got carried away with themselves they pulled back to the last German trenches they had taken and waited on the world to catch them up.

For a fleeting moment they had been in touch with 14th Division who must have rather wondered who these people were that were there one moment and gone again the next. All in all 56th Division had managed to advance almost 2 kilometres for very light casualties (as always the caveat: these were light in Great War terms).

In line with the ripple effect desired by Lt General Snow, the 21st Brigade only commenced their attack at 1138 hours to the south of Neuville Vitasse — already under attack by 56th Division.

On reaching the main road between the village and Hénin they came under heavy machine gun and artillery fire. The 2nd Bn Wiltshire Regiment in particular suffered very heavy casualties and by the time that they and the 18th Bn The King’s had reached the Hindenburg Line they found that the wire had hardly been touched by the bombardment and it was impossible to continue.

The story was much the same on their right for the 89th Brigade. The Brigade had started their assault on the village of St Martin sur Cojeul at 1615 hours and found the going reasonably easy — until they got to the other side of the village. There it was the old tale of uncut wire and the Brigade could get no further and were forced to retire to the northern outskirts of St Martin.

From a German position known as Hill 90 looking towards Héninel

The far right of the Battle of Arras was held by 21st Division. Their entire front was almost four kilometres long but they were only required to attack over the northern half of it in conjunction with 30th Division.

Reports of the state of the wire in front of them were not encouraging and when 64th Brigade began their attack at 1554 hours they found that the wire was once again hardly touched. With the failure of the 30th Division to advance past St Martin the German defenders were now in a position to concentrate all their efforts on this new threat which was soon ground down.