The task of VI Corps was to attack the area between the village of Tilloy les Mofflaines on the main Cambrai Road and the Scarpe River on their left.

In French, names ending in -oy are pronounced -wah.

The area in front of them had been pretty much unaffected by the German withdrawal in March to the Hindenburg Line. The desired target was the village of Monchy le Preux but before that the Corps was actually aiming at the Wancourt-Feuchy Line: the Brown Line objective.

Tanks would be made available to encircle Tilloy and then press on to another known strong point at Feuchy Chapel straight down the main road towards Cambrai.

Immediately in front of Tilloy the 3rd Division had such a narrow front that they only initially used a single battalion to start their attack. Here the Hindenburg Line had finally run its course from the south and now entered the old defensive system. As it formed the junction between the two systems it was considered a weak point.

Once the single battalion had reached the German’s 4th Trench a second battalion would pass through and enter into Devil’s Wood a small wood located just in front of Tilloy. These two battalions would be from 76th Brigade who would then give way to 9th Brigade for the assault on the village itself as well as the northern half of a redoubt called The Harp which straddled the boundary between VI and VII Corps.

Zero Hour was 0530 hours and following a hurricane bombardment the 1st Bn Gordon Highlanders stormed through to the German 4th Line. At that stage 10th Bn Royal Welsh Fusiliers took the fight into Devil’s Wood.

The Germans were completely bewildered by the events and after just two hours of fighting the 76th Brigade allowed the 9th Brigade to pass through them as planned. At this moment tanks were supposed to have been available to assist in the attack but the ten tanks of 9 Company, which had been stationed overnight in the moat at Arras Citadel, so ripped up the road on their way to the front that they ended up bogged down and were late for the battle.

At 1200 hours 9th Brigade allowed 8th Brigade to take over the fighting, and the arrival of fresh troops put an end to the German resistance in Tilloy.

3rd Division now pushed on towards the Wancourt-Feuchy Line but as they got within 500 metres of it they were forced down by steady machine gun fire coming from the strong point at Feuchy Chapel on their left. A pause in the advance was made whilst a supplementary bombardment was put down but when the infantry tried to advance again at 1845 hours they were once more forced back.

The Division had been stopped just short of its Brown Line objective along the road between Feuchy Chapel and the village of Neuville Vitasse.

The 12th Division had been sheltered throughout the build up to the battle deep in the caves and tunnels under Arras. Their casualties whilst manning the front line had been negligible and the soldiers were fit and well rested. The Division would advance on the left of the 3rd with the Arras Cambrai Road on their right.

Like their neighbour the Division opted for a leap frog form of attack with the 36th and 37th Brigades taking the attack as far as the Hindenburg Line and then allowing the 35th Brigade to pass through and sweep across the valley.

To the north of Tilloy les Mofflaines is a ridge which runs northwards towards the village of Feuchy. This was known to the British as Observation Ridge for the obvious reason that the Germans had a fine view of everything taking place on the British side of no man’s land.

The Germans however were taking risks. As they had such an excellent field of observation they had decided to leave their artillery clustered behind the ridge in what was known as Battery Valley. If the ridge fell, the artillery would be lost with it.

At 0530 hours and under cover of a 24 machine gun barrage 12th Division launched their attack.

Despite a few spirited efforts of resistance, most of the German front line positions were taken relatively easily. Some positions held out and their determination to fight it out would have a knock on effect during the battle.

Sergeant Harry Cator’s platoon from 7th Bn East Surrey had suffered heavy casualties from a hostile machine-gun. Under heavy fire the sergeant, with one man, advanced across the open to attack the gun and when his companion was killed, he went on alone. Picking up a Lewis Gun and some ammunition drums on his way, he succeeded in reaching the enemy trench and sighting another hostile machine-gun, he killed the entire team and the officer. He held the end of the trench with such effect that the bombing squad were able to capture 100 prisoners and five machine-guns.

For his act of courage Sergeant Cator was awarded the Victoria Cross.

The 35th Brigade who had only moved up out of the Arras tunnels at 0730 hours were now preparing themselves for their advance to the Brown Line: the Wancourt-Feuchy Line.

At 1100 hours the 7th Bn Norfolk Regiment were told to force the issue along the Cambrai Road and had little in the way of opposition as they did so; up until they arrived in front of Feuchy Chapel where the very same strong point that was managing to hold up the 3rd Division now put the Norfolks to ground as well.

The scene was almost Napoleonic with some batteries of guns abandoned, others trying to limber up and get away and others whose crews were intending to stay and fight it out. The cannons lowered their muzzles and started firing at point blank into the ranks of the advancing British.

Times had changed though and the attackers were no longer in deep formation and their own weapons were far more accurate. Batteries started to fall and by the end of the day the Essex had captured nine guns and the Berks had not only captured twenty-two but had succeeded in turning some around and shelling their former owners.

Importantly, the Essex had also swung to their right and captured Feuchy Chapel.

Excellent though all this work was, those hold ups at the start meant the Division began to run late and behind the barrage. The Germans were proving themselves better prepared in the Wancourt-Feuchy Line and the Division like the 3rd had to settle for an advance just short of it.

The 15th Division had also been able to make good use of the shelter afforded under the town of Arras and their soldiers were equally well prepared for the fight. With most of the tanks already handed out the left flank of VI Corps had been allotted just two which were initially to be used against a zone known as Railway Triangle. This was formed by the junction of the Arras – Lille – Valenciennes Lines which all ran on high embankments offering good views and easy defence. 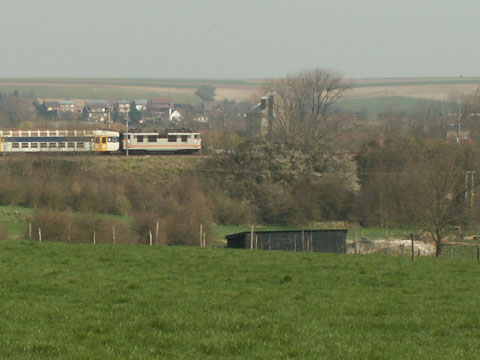 The railway embankment at Feuchy

On the far left most of the village of Blangy was already in British hands but the 13th Bn Royal Scots were detailed off to capture the remaining buildings still controlled by the Germans.

At Zero Hour the 45th Brigade on the left and 44th on the right commenced their assault on the German lines. They made good progress through the enemy’s trench system but soon found themselves held up by Railway Triangle. A secondary bombardment was ordered and the infantry tried again, this time accompanied by a tank which took on the German machine gunners to great effect.

By 1230 hours the entire Division had reached their second objective or Blue Line and the 12th Bn Highland Light Infantry of 46th Brigade began to cross Battery Valley. Half way across they discovered that in fact there had been a postponement of the advance pending a new creeping barrage to soften up the German positions. Realising that it was now too late to try and retreat again the HLI dug in and took what shelter they could and let the barrage pass through and over them.

Their losses were thankfully slight and they immediately got up behind the barrage with 10th Bn Scottish Rifles and the 7th Bn Kings Own Scottish Borderers who had arrived along with the barrage.

The scene crossing Battery Valley was much the same as for 12th Division. Some of the German gunners decided to slug it out, firing at just 250 metres into the attackers, only to find themselves overwhelmed by Scots who were by now very upset and touchy at such treatment.

The 7th Bn KOSB and two companies from 10th Bn Scottish Rifles now entered and took the village of Feuchy which had just been subjected to its own personal bombardment by 6 inch howitzers. By 1600 hours the 15th Division had entered the Wancourt-Feuchy Line and with the aid of a tank captured all of its sector of the Brown Line objective by 1730.

A few minutes earlier cavalry from the Northamptonshire Yeomanry passed Feuchy and had reached as far as the crossroads outside the next village of Fampoux where they linked up with 4th Division of neighbouring XVII Corps (on the left flank).

At 1900 hours 63rd Brigade of 37th Division who had been in reserve throughout the battle reached Battery Valley. The 111th Brigade had already been engaged, assisting 12th Division but the ultimate objective of attaining Monchy le Preux now seemed remote. At 1935 hours the final action of the day took place as Orange Hill which lay between the Corps and Monchy was taken out.

The Corps had advanced a good 3 kilometres but those initial hold ups on the right flank had prevented the full exploitation of the breakthrough on the left.