Webmatters : Arras 1917 - The capture of Gavrelle by the Royal Naval Division

For a brief introduction to the Royal Naval Division please follow the link.

The formation of the 63rd (RN) Division

On the 9th April 1917 the British Third Army launched the Battle of Arras striking towards Cambrai. That same morning the First Army (and in particular the Canadian Corps) assaulted Vimy Ridge to the north of Arras.

For a few days all went well but by the 14th April the advances made by the Third Army were starting to peter out. The weather had not been kind and to the north of the village of Monchy le Preux the 34th Division were suffering from exposure and exhaustion. They had already lost men, frozen to death, and needed to be retired for rest.

On the evening of the 14th April 1917 the 63rd (RN) Division, which was part of the First Army’s reserve, began taking over the line in front of the village of Gavrelle.

Although the gains were diminishing Field Marshal Haig’s priority was to occupy the Germans in the lead up to a French offensive due to take place on the Chemin des Dames on the 16th April.

The front line commanders of the Third Army had already put forward their objections to the idea of local operations. They pointed out that Monchy had come very close to being lost again after two battalions had advanced out of it and had been badly mauled by German counter attacks.

A general renewal of the offensive was agreed by both Third and First Armies and after weather conditions had made anything sooner implausible, Zero hour was set as 0445 hours on the 23rd April 1917.

Having breached the German’s front line positions during the preceding weeks, the British were now confronted in this sector by a trench system known as the Oppy line — named after the village north of Gavrelle.

Despite a preliminary bombardment, the German wire north of Gavrelle was hardly touched and First Army decided that their part in the renewed offensive would, for the moment, be limited to taking Gavrelle.

On the right of the 63rd Division the Drake Battalion (189th Brigade) had also noted sections of uncut wire and limited its attack to the northern half of its objective where there were sufficient holes.

Advancing through these gaps they made good progress and having attained the top end of their objective they then bombed their way down the rest, securing the position.

On the left of the divisional front the 4th Bn Bedfordshire regiment and 7th Bn Royal Fusiliers managed to get into their first objective but the Fusiliers who were working with an open left flank were now held up by a swathe of uncut wire in front of them.

Whilst the Fusiliers were checked, the other battalions pushed on into the centre of the village where the Bedfords in turn found their own left flank compromised. Instead of being able to advance as far as the railway line they were forced to hang back.

Coming up behind the Drake and Nelson battalions the Hood Battalion was supposed to have waited to give the former a chance to clear their first objective. However, in the face of a German counter barrage, they decided that the best response was to push forward creating a mish mash of troops in the centre of the village.

Once the units had been reorganised they continued their way up the street fighting a dogged battle from house to house. Having taken the village they tried to continue on, but getting in was one thing, trying to emerge out the other side was another altogether.

As soon as the sailors and soldiers tried to leave the cover of the buildings they were swept with machine gun fire. They only had a further 300 metres to achieve but the commanders on the spot realised that success was far from certain, that the losses would be high and settled for what they had.

Unfortunately the windmill on the high ground just to the north of the village was not taken. It no longer exists but if you turn up between the cafés and under the N50 there is a wee side road, second on your right, leading to an area of waste ground. From here you can look out towards where the windmill would have been (amongst the pylons) and gauge its commanding position over the village below.

As the Official History points out the Germans considered the windmill as the key stone to this sector of the Oppy Line.

Not content with merely shooting at any emerging British troops the Germans also attempted a number of counter attacks themselves but all of these were beaten off.

It was, however, not until late in the evening that the 1st Bn Honourable Artillery Company (HAC) were finally in a position to secure the Division’s left flank.

The following morning the Germans continued to send wave after wave of soldiers against the new possessors of the village but once again these were beaten off.

Then, at midday, the Germans fired a terrific bombardment into the village before launching a large scale assault at 1530 hours. Although they advanced with determination they presented easy targets for the British artillery and machine guns.

Some managed to reach as far as the village but their numbers had dwindled to insignificance and they were soon dealt with.

In all, 479 prisoners were taken by the 63rd Division but the work had only begun. The thorny problem was going to be how to continue the advance out from the village into yet another German defensive line.

The continuation of the battle was organised for the 28th April when the 63rd Division tried once more to leave Gavrelle and to their left flank the Canadians captured Arleux.

It will be remembered that due to uncut wire, the area to the north of Gavrelle had not been attacked on the 23rd April, this meant that the capture of the village had created a salient (a bulge) into the German lines.

Two battalions of the 188th Brigade were detailed to carry out the task of advancing the line. Coming out of Gavrelle, the 2nd Bn Royal Marines were to advance northwards along the Gavrelle-Fresnes Road whilst on their left the 1st Bn Royal Marines had to advance up as far as the German trenches in the Oppy Line and then continue eastwards until they met up with their fellow marines.

Behind them the 1st Bn HAC were held in reserve and the Anson Battalion were to push slightly forward out of the village to complete the new defensive position.

At 0425 hours on the 28th April the two Marine Battalions launched their very separate attacks. The 1st Battalion were to all intents and purposes never heard of again. They had advanced headlong into a strong point (where the German trench system crossed the railway line) and although some of them managed to fight their way through, the flanking units never made contact with them. The only form of news was from the few wounded whom managed to get back to their own lines.

The HAC were ordered to bomb their way up the Oppy line and succeeded in capturing the strong point, but it was too late for the marines who could not be found. Shortly afterwards the Germans recaptured their position.

The 2nd Battalion managed to gain some territory including the all important windmill but by the evening the captured ground was back in the hands of the Germans with the exception of a small garrison who were hanging on for grim death at the windmill. 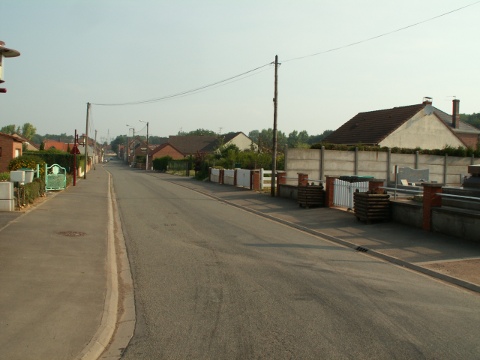 Towards the village centre, the communal cemetery on the immediate right.
This street was the defensive line held by the pioneers

A strong German counter attack was launched against Gavrelle itself and this was only repulsed by the timely arrival of the 14th Bn Worcestershire Regiment, the divisional pioneers, who had been ordered forward at short notice.

Arriving in the village they were parcelled out along the front line. A Company was attached to the Anson Battalion and B Company to the HAC who had taken over much of the front line after the Marines attack had been repulsed.

The battle raged through the night and an attempt by the Anson to take the German position outside the village failed completely. A German counter attack being held off by the steady firing of the pioneers.

By the evening of the 29th April the situation at Gavrelle was pretty much the same. The village was solidly in the hands of the Naval Division and the Windmill defenders were holding out.

The following day the 31st Division took over the line.

The Royal Naval Division monument sits at the entrance to Gavrelle village as you come off the main Arras – Douai Road.

Many of those who fell in the battle are buried at Orchard Dump Cemetery just outside Arleux whilst others are in Naval Trench in the village of Gavrelle.