The village of Gavrelle can be easily reached from Arras by taking the N50 towards Douai. The village is about 11 kilometres from Arras and coming from that direction you will pass the Scottish cairn on your right at Point du jour, before reaching the Gavrelle slip road a few minutes later.

The Monument is immediately on your left and you can park close by on the right.

This is a very fast road so take due care and attention when moving about as the locals arrive off the express dual-carriageway at great speed.

Coming from Douai you will arrive in the centre of the village. Turn right past the church and continue straight on. The signs state that you can continue as far as the monument — where you must then turn around.

Alternatively the village can be reached via the villages of Fampoux or Roeux, both of which were caught up in the same battle. 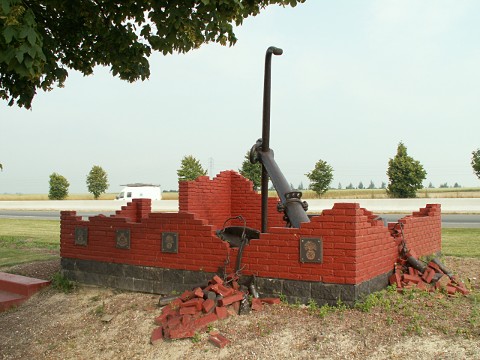 On the 9th April 1917 the British Third Army launched the Battle of Arras striking towards Cambrai. That same morning the First Army (and in particular the Canadian Corps) assaulted Vimy Ridge to the north of Arras.

For a few days all went well but by the 14th April the advances made by the Third Army were starting to peter out. That evening the 63rd (RN) Division, which was part of the First Army’s reserve, began taking over the line in front of the village of Gavrelle.

Having breached the German’s front line positions during the preceding weeks, the British were now confronted in this sector by a trench system known as the Oppy line — named after the village north of Gavrelle.

Despite a preliminary bombardment, the German wire north of Gavrelle was hardly touched and First Army decided that their part in the renewed offensive would, for the moment, be limited to taking Gavrelle.

On the left of the divisional front the 4th Bn Bedfordshire regiment and 7th Bn Royal Fusiliers managed to get into their first objective but the Fusiliers who were working with an open left flank were now held up by a swathe of uncut wire in front of them.

Whilst the Fusiliers were checked, the other battalions pushed on into the centre of the village where the Bedfords in turn found their own left flank compromised.

Once units had been reorganised they continued their way up the street fighting a dogged battle from house to house. Having taken the village they tried to continue on, but getting in was one thing, trying to emerge out the other side was another altogether.

As soon as the sailors and soldiers tried to leave the cover of the buildings they were swept with machine gun fire. They only had a further 300 metres to achieve but the commanders on the spot realised that success was far from certain, that the losses would be high and settled for what they had.

In all, 479 prisoners were taken by the 63rd Division. 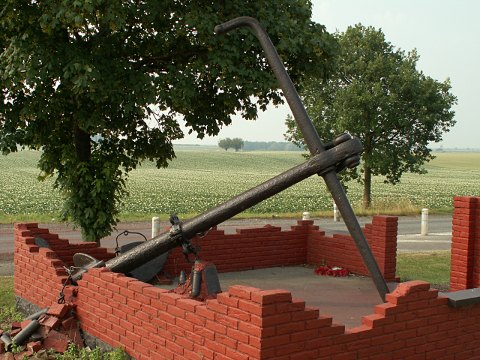 The two trees in the distance mark Naval Trench Cemetery

The principle personality behind the erection of this monument to the Royal Naval Division is the author Trevor Tasker.

Unlike their monument at Beaucourt – a simple obelisk – this imaginative conception expresses the idea of the Royal Naval Division anchored within the ruins of the village.

The three ton anchor was provided by the Royal Navy and the red bricks represent the commonest form of building material in the village.

Scattered around the walls of the ruin are a number of shells lying amongst the fallen bricks. There are plaques to all the units of the Division on the outer wall.

The monument was unveiled on the 8th May 1991 in the pouring rain and has received a couple of coats of paint since then to keep it fresh.

If you look across the fields away from the express you will be able to see Naval Trench Cemetery where some of those who fell are buried. Many of the others are buried at Orchard Dump Cemetery just outside Arleux.

The road to Plouvain and the local cemetery mark one of the lines of defence held by the Division in April 1917.

The other memorials in Gavrelle