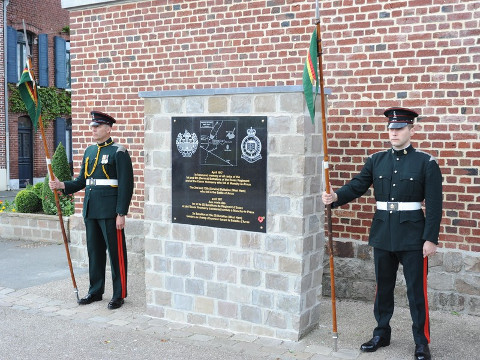 On the 11th April 1917, during the advance from Arras, the 8th Cavalry Brigade was ordered to advance, mounted, over open country to occupy high ground to the east and north east of Monchy le Preux, a key position between the two rivers : Scarpe and Sensée.

Between 0715 and 0800 hours information was received that La Bergère on the main road (where you will find Windmill Cemetery) and Monchy had been taken by the infantry of the 37th Division. Whilst the news was somewhat premature it was not wholly inaccurate. At 0830 hours therefore, the Essex Yeomanry led the cavalry advance with the 10th Hussars on its left and the Royal Horse Guards in reserve. C Squadron, their leading squadron, were almost wiped out by machine-gun fire coming from the high ground to their left and in accordance with the orders of Brigadier General Bulkeley-Johnson (who was killed later that day) they swung to their right and headed directly into Monchy. The remainder of the Yeomanry followed on whilst the Hussars, realising why the Yeomanry were wheeling into the village followed suit. Attempts to leave the vilage by the main roads were met by heavy fire and and both units were forced to withdraw back into the village and began digging in.

The few infantry that remained in the village were by now badly disorganised from the fighting and thoroughly worn out.

With the deaths of their general and that of Lt Colonel Hardwick of the Hussars, Lt Colonel Whitmore, commanding the Yeomanry, took command of all the troops in the village until they were relieved by the infantry the following day. The regiment suffered a hundred and thirty-five casualties in the action and lost the majority of its horses in the counter-bombardment by the German artillery.

Lance Corporal Harold Mugford, a former member of the Regiment, but serving with the 8th Machine Gun Squadron set up his machine gun in the village and used it effectively against German Infantry massing for a counter-attack. Despite being wounded and then having his legs broken by a shell he refused to leave his post. For his bravery in action he was awarded the Victoria Cross. He survived the war dying in 1958.

On the 14th April 1917 the 1st Bn Essex Regiment and Newfoundland Regiment advanced out of the village towards Infantry Hill (the next hill towards Cambrai). This was supposed to have been a coordinated attack by the 29th Division (of whom they were a part) but the 87th Brigade opposite Guémappe had only just been brought up and were insufficiently organised to contemplate attacking unknown ground.

This left the two battalions of 88th Brigade attacking on their own with as much covering artillery fire as could be mustered. Their objective was the forward slope of Infantry Hill (also known as Hill 100) from which they were then to spread out into the neighbouring woods to check on any German presence.

The Essex mustered in a newly dug trench a hundred metres east of Monchy with the Newfoundlanders on their right. Although 2nd Bn Hampshire Regiment were in reserve (on Orange Hill – there is a 1918 CWGC cemetery there) they were not required to move up and occupy the forward trenches as the attacking battalions moved out.

The attack at 0530 hours was a success and patrols filtered out into the flanking woods. What had not been realised was that the Germans were using a new system of defence. Instead of manning their front lines in strength they were operating a flexible approach. If attacked ground could be given up whilst designated counter-attack units were gathered to throw back the enemy.

Within a very short period the two battalions were overwhelmed and thrown back in disorder. By 1010 hours Lt Colonel Forbes-Robertson of the Newfoundland Regiment had been alerted of the disaster and that Germans were approaching the ill defended eastern side of Monchy. Gathering up a small party of men he managed to hold off the Germans until the arrival of reinforcements (the Hampshires) at 1445 hours.

Monchy had been saved but the cost to both attacking battalions had been a heavy one. The Newfoundland Regiment suffered 485 casualties (151 killed) and the 1st Bn Essex Regiment 602 casualties (191 killed).

The memorial plaque honours the Essex Yeomanry and those battalions of the Essex Regiment who fought in the area of Arras, in particular their 1st Battalion at Monchy.

The inspiration for the plaque and fund raising was organised by Dr Ted Bailey whose grandfather, RSM Frank Bailey DCM served with the 1st Bn Essex Regiment during the war.

The plaque was inaugurated on the 21st May 2016 in the presence of Baron Petre, Lord Lieutenant of Essex, Colonel Stephen Foakes of the Essex Yeomanry, Colonel Charles Thomas of the Essex Regiment and other military and civilian representatives from Essex. Michel Zechel, Maire of Monchy le Preux was joined by Étienne Desplanques representing the Préfecture of the Pas de Calais.

Some photos from inauguration